Mary’s tears are seeds of hope 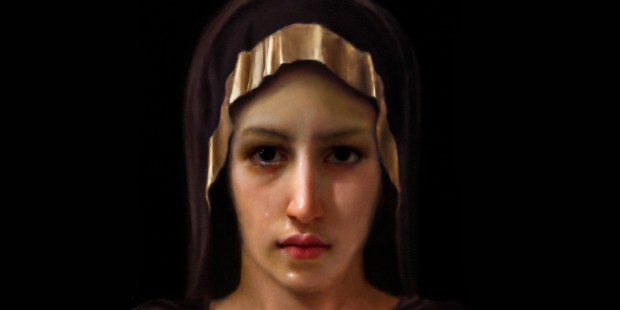 In his latest catechesis on Christian hope, Pope Francis reflects on an Old Testament prophecy and its fulfillment in Our Lady’s tears

VATICAN CITY — In his continuing catechesis on Christian hope, Pope Francis today reflected on the Old Testament figure of Rachel as an example of what he called “hope lived in tears.”

Addressing faithful and pilgrims at the Wednesday general audience, in the Vatican’s Paul VI Hall, the pope turned to the prophet Jeremiah’s portrayal of Rachel’s bitter lament over the loss of her children in this poignant and poetic passage:

“A voice is heard in Ramah,
lamentation and bitter weeping.
Rachel is weeping for her children;
She refuses to be comforted for her children,
Because they are no more.” (Jeremiah 31:15-16)

The pope explained that the prophet evokes Rachel’s tears – the tears of a mother who weeps for her children and would not be consoled – to describe the sorrow of the Chosen People at the time of the Exile.

Anyone familiar with the grief of a mother who has lost a child knows the power of this image, he said. In response to Rachel’s tears, God offers a word of consolation by promising new life in the return of the exiles (cf. Jeremiah 31:15-17).

In this Christmas season, Pope Francis added, we read Jeremiah’s prophecy on the feast of the Holy Innocents. In the Gospel for that day, St. Matthew also evokes Rachel’s tears to describe the grief of those mothers who saw their children killed before their eyes, victims of a tyranny that despises and destroys life.

Yet it is in Mary, standing at the foot of the cross, that the prophecy is truly fulfilled. Our Lady’s tears for the death of her Son bear fruit in new hope and new life for all those who, through faith, become her children in the body of the Risen Christ, which is the Church, he said.

Read below is the full text of the pope’s catechesis.

In today’s catechesis I would like to contemplate the figure of a woman who speaks to us of hope lived in tears. Hope lived in tears. It is Rachel, the wife of Jacob and the mother of Joseph and Benjamin; she who, as the Book of Genesis recounts, dies giving birth to her second born son, Benjamin.

The prophet Jeremiah refers to Rachel in addressing the Israelites who are in exile to comfort them, with words full of emotion and poetry. That is, he takes up Rachel’s cry but gives hope:

Thus says the Lord:
“A voice is heard in Ramah,
lamentation and bitter weeping.
Rachel is weeping for her children;
She refuses to be comforted for her children,
Because they are no more.” (Jeremiah 31:15-16)

In these verses Jeremiah presents a woman of her people, the great matriarch of her tribe, in the reality of pain and weeping. Rachel, who in the Genesis account had died in childbirth and had accepted death so that her son might live, now instead — represented by the prophet as alive in Ramah, where the exiled were gathered — weeps for her children who, in a certain sense, died by going into exile; children who, as she herself says, “are no more,” and have disappeared forever.

And this is why Rachel would not be consoled. This refusal expresses the depth of her pain and the bitterness of her weeping. In facing the tragedy of the loss of her children, a mother cannot accept consoling words or gestures, which are always inadequate and unable to sooth the pain of a wound that cannot, and will not, be healed. It is a pain proportioned to love.

Every mother knows this. And there are so many mothers, even today, who weep, who do not resign themselves to the loss of a child, who are inconsolable before a death that is impossible to accept. Rachel embodies the pain of all the mothers of the world, in every age, and the tears of every human being who weeps over an irreparable loss.

The refusal of Rachel, who would not be consoled, also teaches us how much sensitivity is required of us in the face of another’s pain. In order to speak about hope to someone in despair, we need to share their desperation; in order to dry a tear on the face of someone who is suffering, we need to join our weeping to theirs. Only in this way can our words truly be capable of giving a little hope. And if I cannot say a word in this way, with weeping, with pain, then silence is better. A caress, a gesture … but no words.

God, in his gentleness and love, responds to Rachel’s cry with true words, not words that are feigned. The text from Jeremiah, in fact, continues in this way:

Precisely because of the weeping of a mother is there still hope for her children, who shall return to life. This woman, who had accepted death at the moment of childbirth so that her son might live, through her weeping is now the principle of new life for her exiled, imprisoned children who are far from their homeland. The Lord responds to the pain and bitter weeping of Rachel with a promise that can now be for her a reason for true consolation: the people will be able to return from exile and freely live their relationship with God in faith.

Tears have borne hope. This is not easy to understand, but it is true. So many times in our lives, tears sow hope; they are seeds of hope.

As we know, this text from Jeremiah is then taken up by the Evangelist Matthew and applied to the massacre of the innocents (cf. 2:16-18). This text places us before the tragedy of the murder of defenseless human beings, and the horror of power that despises and eliminates life.

The children of Bethlehem died because of Jesus. And he, the Innocent Lamb, would then die, in turn, for all of us. The Son of God entered into the suffering of men. We must not forget this. When someone addresses me and asks me difficult questions, for example: “Tell me, Father: why do children suffer?”, I truly do not know now to respond. I only say: “Look at Jesus Crucified: God has given us his Son; he has suffered, and perhaps there you will find an answer.” But [pointing to his prepared text] there are no answers here. Only looking to the love of God who gave his Son, who offers his life for us, can point us to a path of consolation. And that is why we say that the Son of God entered into the suffering of men; he shared and accepted death; his Word is definitively a word of consolation, because it is born of tears.

On the Cross, it is the dying Son who gives a new fruitfulness to his mother, entrusting the disciple John to her, and making her the mother of believers. Death is conquered, and thus is the prophecy of Jeremiah fulfilled. Mary’s tears, like those of Rachel, have borne hope and new life. Thank you.