Pope Francis: The Magi personify all those with a “holy longing” for God 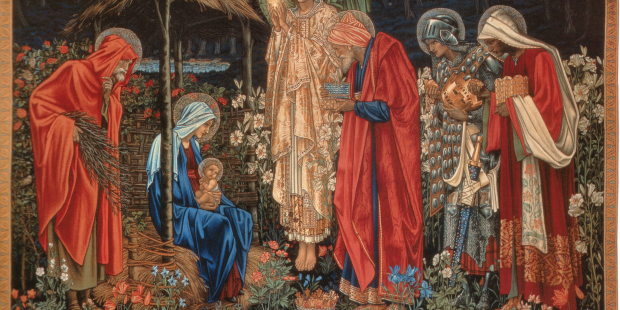 Such longing, the Holy Father said, contrasts with Herod’s self-worship

VATICAN CITY — The Magi were tired of the familiar, and weary of the Herods of their day and so, out of a deep longing, they courageously set out to encounter and worship Jesus, the newborn king who is “God with us.”

In his homily on the Solemnity of the Epiphany, Pope Francis recalled how a “holy longing,” which the Three Kings had, was also manifested in the prodigal son, the shepherd who left the 99 sheep to seek the one who was lost, and Mary Magdalene who ran to the tomb to meet the Risen Lord.

He also said that such longing draws us out of “iron clad isolation, which makes us think that nothing can change.” It also impels us to “make the changes we want and need,” to “reach out to the future” and go to the peripheries.

He contrasted this longing with Herod’s attitude, who felt bewildered and afraid. It’s a bewilderment that anyone has who is closed in on himself and his own achievements, wealth, knowledge and successes. The pope added that such a bewilderment is borne of “fear and foreboding before anything that challenges us, calls into question our certainties and our truth, our ways of clinging to this world and this life.” Herod was “afraid, and that fear led him to seek security in crime.”

Quoting the 5th century Church Father and bishop of Carthage, St. Quodvultusdeus, he said of Herod: “You kill the little ones in their bodies, because fear is killing you in your heart.”

He also added that Herod was “unable to worship because he could not or would not change his own way of looking at things.” The tyrannical king “did not want to stop worshiping himself, believing that everything revolved around him. He was unable to worship, because his aim was to make others worship him.”

The Magi, on the other hand, “discovered the glory of God” as they “fell to their knees before the small, poor and vulnerable Infant, the unexpected and unknown Child of Bethlehem.”

Here below is the official English text of the Pope’s homily for the Epiphany.

“Where is the child who has been born king of the Jews? For we have observed his star in the East, and have come to worship him” (Mt 2:2).

With these words, the Magi, come from afar, tell us the reason for their long journey: they came to worship the newborn King. To see and to worship. These two actions stand out in the Gospel account. We saw a star and we want to worship.

These men saw a star that made them set out. The discovery of something unusual in the heavens sparked a whole series of events. The star did not shine just for them, nor did they have special DNA to be able to see it. As one of the Church Fathers rightly noted, the Magi did not set out because they had seen the star, but they saw the star because they had already set out” (cf. Saint John Chrysostom). Their hearts were open to the horizon and they could see what the heavens were showing them, for they were guided by an inner restlessness. They were open to something new.

The Magi thus personify all those who believe, those who long for God, who yearn for their home, their heavenly homeland. They reflect the image of all those who in their lives have let their hearts be anesthetized.

This same longing led the elderly Simeon to go up each day to the Temple, certain that his life would not end before he had held the Savior in his arms. This longing led the Prodigal Son to abandon his self-destructive lifestyle and to seek his father’s embrace. This was the longing felt by the shepherd who left the ninety-nine sheep in order to seek out the one that was lost. Mary Magdalene experienced the same longing on that Sunday morning when she ran to the tomb and met her risen Master. Longing for God draws us out of our iron-clad isolation, which makes us think that nothing can change. Longing for God shatters our dreary routines and impels us to make the changes we want and need. Longing for God has its roots in the past yet does not remain there: it reaches out to the future. Believers who feel this longing are led by faith to seek God, as the Magi did, in the most distant corners of history, for they know that there the Lord awaits them. They go to the peripheries, to the frontiers, to places not yet evangelized, to encounter their Lord. Nor do they do this out of a sense of superiority, but rather as beggars who cannot ignore the eyes of those who for whom the Good News is still uncharted territory.

We want to worship. Those men came from the East to worship, and they came to do so in the place befitting a king: a palace. This is significant. Their quest led them there, for it was fitting that a king should be born in a palace, amid a court and all his subjects. For that is a sign of power, success, a life of achievement. One might well expect a king to be venerated, feared and adulated. True, but not necessarily loved. For those are worldly categories, the paltry idols to which we pay homage: the cult of power, outward appearances and superiority. Idols that promise only sorrow, enslavement, fear.

It was there, in that place, that those men, come from afar, would embark upon their longest journey. There they set out boldly on a more arduous and complicated journey. They had to discover that what they sought was not in a palace, but elsewhere, both existentially and geographically. There, in the palace, they did not see the star guiding them to discover a God who wants to be loved. For only under the banner of freedom, not tyranny, is it possible to realize that the gaze of this unknown but desired king does not abase, enslave, or imprison us. To realize that the gaze of God lifts up, forgives and heals. To realize that God wanted to be born where we least expected, or perhaps desired, in a place where we so often refuse him. To realize that in God’s eyes there is always room for those who are wounded, weary, mistreated, abandoned. That his strength and his power are called mercy. For some of us, how far Jerusalem is from Bethlehem!

Herod is unable to worship because he could not or would not change his own way of looking at things. He did not want to stop worshiping himself, believing that everything revolved around him. He was unable to worship, because his aim was to make others worship him. Nor could the priests worship, because although they had great knowledge, and knew the prophecies, they were not ready to make the journey or to change their ways.

The Magi experienced longing; they were tired of the usual fare. They were all too familiar with, and weary of, the Herods of their own day. But there, in Bethlehem, was a promise of newness, of gratuitousness. There something new was taking place. The Magi were able to worship, because they had the courage to set out. And as they fell to their knees before the small, poor and vulnerable Infant, the unexpected and unknown Child of Bethlehem, they discovered the glory of God.