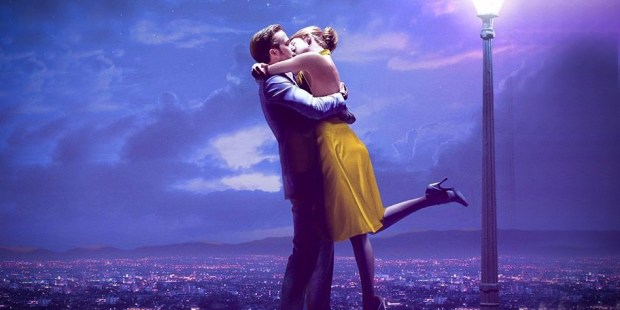 It’s been a while since a movie came along that relies so heavily on its ending to elevate it into something special, but that’s exactly what happens with writer-director Damien Chazelle’s new film, La La Land.

Now, that’s not to say the rest of the movie isn’t good. Far from it. The opening musical number, “Another Day of Sun,” in which dozens of stranded motorists erupt into song and dance atop one of Los Angeles’ express ramps, is about as lively and fun a piece of cinema as one could ask for. The lyrics to the tune, which is basically a joyful ode to unfulfilled dreams, also serve to subtly setup the bittersweet undercurrent which comes to its fulfillment at the end of the film.

But that’s jumping ahead. In between those opening and closing moments, we meet aspiring actress Mia (Emma Stone) and floundering jazz pianist Sebastian (Ryan Gosling). While making ends meet as a barista on the MGM lot, Mia divides her time off between unsuccessful auditions and Hollywood parties full of hopefuls. What she really wants to do, though, is produce and star in her own one-woman show. Sebastian is a wizard on the keys, but can’t keep a gig because his love of playing the classics prevents him from sticking to smooth jazz set lists. His dream is to one day open his own jazz club where anyone can play in any style they want.

After two potential meet-cutes that don’t quite pan out, Mia and Sebastian finally come together properly at yet another posh pool party in the Hollywood Hills. Unfortunately, Mia is already in a relationship and Sebastian doesn’t want one, so all the pair can do is bemoan in song how much the romantic evening is wasted on them despite their obvious attraction to one another.

Naturally, their reticence doesn’t last, and soon the couple are off on a whirlwind romance, dancing and singing their way through L.A. while doing their best to help each other realize their hopes and dreams. It’s pretty standard stuff, and could be the story and characters from any musical since The Broadway Melody hit screens in 1929. And that’s sort of the point, in a way. Chazelle has no interest in reinventing the wheel. La La Land is nothing if not a loving homage to all that came before it, with such a copious number of references to classic Hollywood musicals that even the most avid of movie buffs will need to do a little research to catch them all.

Of course, all those allusions eventually remind the viewer that La La Land isn’t quite the masterpiece some of its predecessors were. Stone and Gosling have great chemistry and are fun to watch, but they’re no Ginger Rogers and Fred Astaire. The same goes for the songs by composer Justin Hurwitz and lyricists Benj Pasek and Justin Paul. They’re undeniably hummable and perfectly suited for the story, but probably won’t ever become standards the way something like “Singing in the Rain” has. In short, it’s all good, but not quite great.

Until the end, that is.

One of the reasons the Church has always pushed so hard for its members to seek spiritual direction is so that, no matter what path we seek in life, our choices will honor the place of God’s will in our lives. That way, regardless of whether or not our “dreams” are ever realized, we can be content that it was all in God’s plan, that we made the right decisions in life.

Mia and Sebastian don’t have that going for them. While they deeply love another, their only true guiding force are the aspirations that brought them to La La Land in the first place. In an average movie, that would be sufficient; their ambitions would conquer all. But while La La Land is undeniably an unabashed love letter to all those who come to Hollywood chasing their dreams, its ending doesn’t gloss over the reality that a life spent only in pursuit of one’s fondest desires can often lead to as many regrets as it does rewards.

It’s a rather unexpected denouement that takes what was a light and breezy diversion of a movie and turns it into something more heartfelt and meaningful. And when La La Land takes its place alongside the likes of Arrival and Manchester by the Sea in this year’s Best Picture nominees, it will have its ending to thank for it.