What is Christianity? It’s all about an Epiphany 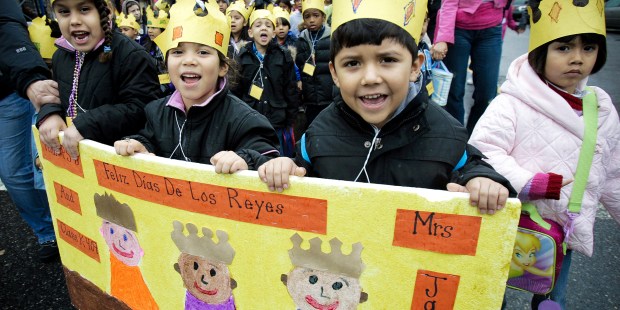 The beauty of Christmas reflects this explosive revelation: the Son of God became a man that men might become sons of God.

This past week, I stumbled on an interesting song by Declan McKenna, an 18-year-old singer-songwriter from England, titled “Bethlehem.” A saccharine take on the birth of Christ, this was not; instead, McKenna (who, as it turns out, was born on Christmas Eve) sets his sights on believers who assure themselves of a “seat in heaven,” “follow codes and break them,” and make themselves the measure of love.

At Genius, the Generation Z singer offers more commentary on the type of people he’s talking about: “outdated, or stuck in the past”; “hate is hidden under false love”; “persecuting those who ‘sin’ while not worrying about the ‘sins’ you’ve committed”; “believing yourself to be above those around you, angelic, perfect”; “hypocrisy”; “no compassion”; “moral high ground on love.” Elsewhere, McKenna clarifies that he was “raised like a Catholic” and has “a sort of sympathy for religion” – “it can be bad or good” – but nevertheless wanted to write a song about its “negative or oppressive” strands.

There’s nothing new under the sun, of course. Christianity has been framed as a negative moral force for hundreds of years, a million times over, rehearsed in the same ways and with the same words so as to become second nature. (The irony of ritualizing the dangers of the ritualistic is lost on us.) And there’s never been a shortage of Christians who, by the example of their own lives, make people leery of Christianity’s “moral high ground.”

But the assumptions involved in constantly framing and debating Christianity in moral terms are more interesting and less talked about. Before a young singer sits to write a song like “Bethlehem,” our milieu has already set the parameters of where he or she can reasonably go. Whether Christianity makes us better people or moral monsters, moral rules are assumed to be the main business of religion, and political expression its upshot. Christianity is seen as just one more moral means to a social end. That’s where it begins and ends.

It’s dizzying to think of how prevalent these assumptions really are, because they tend to deaden the quest – to say nothing of the unending encounter – of the person of Christ.

This is why the Feast of the Epiphany is so important. This feast primarily recalls the arrival of the three Magi in Bethlehem from the East and marks the formal close to the 12 days of Christmas in the Church. But it serves a much deeper purpose: it cuts through every reductionism and re-reveals the beating heart of Christianity.

In his book Jesus of Nazareth: The Infancy Narratives, Pope Benedict XVI describes the Magi as “members of the Persian priestly caste,” masters not only of the mysticism and religion of their time, but also of available scientific and philosophical knowledge. These three men understood a star to be signaling the fulfillment of a “promise in circulation”: the birth of a world ruler in Judea.

What is “manifested” (the Greek root of “epiphany”) when these Magi see the newborn king? Obviously there are moral, social, and political aspects – that this will be an important new ruler and teacher for all nations – but because these are also men of great intellect, there’s another significant aspect in the order of reason.

In a homily on the Epiphany, Bishop Robert Barron explains: “Jesus is not one philosopher or sage or political figure among many. He’s not just another wise religious teacher. Rather, he is the Word made flesh – Logos, in John’s language. That means the divine mind; the great pattern; the intelligibility through which all things were created, toward which all minds are tending.”

The arrival of the kings from the East not only signals other nations and religions being drawn toward this Messiah and Savior of Israel. It was, as G.K. Chesterton said, “truly a scientific discovery,” a light of the mind reflecting the light from the sky. Through Bethlehem, divergent philosophical impulses could be held together, the groundwork for modern science could be laid, and human reason could be exalted as an echo of the inexhaustible Word. “For it is the paradox of that group in the cave,” Chesterton goes on, “that while our emotions about it are of childish simplicity, our thoughts about it can branch with a never-ending complexity.”

The beauty of Christmas reflects this explosive revelation: the Son of God became a man that men might become sons of God. But the highest aspirations of reason, religion, morality, and politics are also gathered into it, and pushed to go ever higher. Even combating religious hypocrisy doesn’t get us out from under it; the greatest barbs from the wittiest new atheist pale in comparison to what Jesus himself unleashes on the Pharisees in the Gospel of Matthew. God became human, and nothing human was alien to him but sin. Even our greatest suffering, darkness, and doubt draws us closer to him through Calvary. There’s nothing new under the sun, but by his life, death, and resurrection, the Son made all things new.

That’s where Christianity begins and ends. And the manifestation of that truth made – and still makes – all the difference.