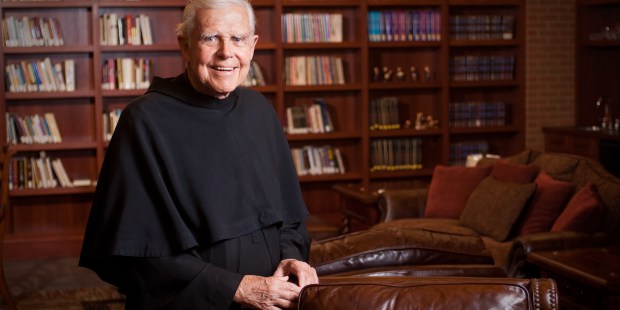 Father Michael Scanlan, TOR, who transformed Franciscan University from a struggling regional college into a world-renowned leader in Catholic higher education, and helped to inspire a restoration of faithful Catholic education in the United States and the world, has died after an extended illness. He was 85.

Scanlan, a priest of the Franciscan Third Order Regular Province of the Most Sacred Heart of Jesus, served as president of Franciscan University from 1974-2000 and chancellor from 2000-2011. An early leader in the Catholic charismatic renewal movement, he led retreats and conferences in 29 states and 15 foreign countries and wrote more than 16 books and booklets, including his still popular autobiography Let the Fire Fall and What Does God Want? Scanlan was one of the first priests to be involved with EWTN (Eternal Word Television Network), which led to his own 18 year-long hosting of the TV program Franciscan University Presents (now in its 23rd year).

Scanlan launched evangelistic conference program for adults and youth that continue to draw tens of thousands today. The impact of the Steubenville Youth Conferences on vocations was confirmed by the Center for Applied Research in the Apostolate, which said that 14 percent of all priests scheduled for ordination in the U.S. in 2014 had participated in a Franciscan University Youth Conference before entering seminary or religious life.

When Scanlan became president of the College of Steubenville in 1974, times were turbulent for Catholic higher education. For the next 26 years, he transformed it into a university with a worldwide reputation for excellence in academics and a passionate Catholic faith environment. Scanlan’s success helped spark a restoration of authentic Catholic education in the United States and beyond, with many colleges and universities renewing their Catholic identity and new schools imitating his emphasis on Catholic Church teaching.

Scanlan’s approach to renewing campus life was based on forming a unique Catholic culture that emphasized faith and reason. He accomplished this in many ways, but among the highlights were his decision to establish “faith households” — small faith-sharing groups on campus, which still serve today as the cornerstone of the University’s student life experience.

Under Scanlan, the University developed nine new undergraduate programs, but the program nearest to his heart, which has had the most far-reaching impact on the worldwide Church, was the Bachelor of Arts in Theology. For this, Scanlan sought out professors dedicated to his vision of “dynamic orthodoxy,” an educational approach marked by fidelity to the Church and openness to the Holy Spirit.  The program went on to become by far the largest undergraduate Theology Program in the country.

Under Scanlan, beginning in 1989, Franciscan University also became the first U.S. Catholic college or university whose theology faculty and priests publicly took the Oath of Fidelity professing their adherence to the teaching authority of the Church. Each year since, all new theology faculty, priests, and others involved in the spiritual formation of students have taken the oath.

Back in 1985, to help address the priestly vocation crisis, Scanlan gave the go-ahead for a pre-seminary program at Franciscan University, and in the last 10 years alone, 115 members of this Priestly Discernment Program entered seminary or a religious order. More than 400 Franciscan University graduates currently serve the Church as priests, and more than 700 alumni have become bishops, priests, and religious brothers and sisters.

In 1992, Scanlan expanded Franciscan University’s reach to Europe by establishing a study-abroad program in a restored 14th-century Carthusian monastery in Gaming, Austria, where today more than 150 students live and study each semester.

By 1983 under Scanlan’s leadership, the University had paid off its entire debt and enrollment had more than doubled. An era of new construction began with expansions and new buildings on campus.

Dr. Scott Hahn, who holds the Father Michael Scanlan Chair of Biblical Theology and the New Evangelization at Franciscan University, said of Scanlan, “He held many titles—rector, president, chancellor, professor. But he once told me the one that meant the most to him was ‘Father’…  He was father to us all—faculty, students, University employees, neighbors, friends.”

Father Sean O. Sheridan, TOR, president of Franciscan University, said Father Scanlan used the gifts and talents God gave him and it was the time he spent with students that was pivotal to the renewal of the campus. “He listened to their concerns and prayed how he might help them. He emphasized the importance of academics, particularly theology, and stressed the role of campus ministry and student life in the daily lives of the students,” said Sheridan.

In 2013, Scanlan said that the “resurrection experience” of  the College of Steubenville was possible because of the latitude he was given as the new president. “Had the University been doing much better, we never could have made changes nor had that much success. It was exciting to be able to establish what was most important to me and the values in my heart in terms of what was Franciscan, Catholic, and unique to Steubenville,” said Scanlan.

He also said that he looked back with gratitude at “the people who stood with me through those days” even if they only “half believed in what I was doing.”

George Weigel, the distinguished senior fellow and William E. Simon Chair in Catholic Studies at the Ethics and Public Policy Center, called Scanlan “a dynamo of evangelical energy who knew that the renewal of Catholic higher education was a critical component of the new evangelization. His personal witness, exuberant manner of life, and ability to communicate the Gospel in a joyful way made major contributions, not only to Franciscan University, but to the entire Catholic Church in the United States—indeed, to the World Church.”

Curtis Martin, a graduate of Franciscan University who is now president of the Fellowship of Catholic University Students (FOCUS), said in Franciscan Way magazine in 2011, “The bedrock of Father Mike’s leadership was his personal relationship with the living God. . . . One guy doing the right thing really can change the world in a powerful way. It’s a powerful reminder of the community of saints.”

Tributes are pouring in to the memorial page for Fr. Scanlan. For all his achievements and renown, it was his personal holiness that so many will remember. Father Richard Davis, TOR, minister provincial of the Province of the Most Sacred Heart of Jesus, lived in community with Scanlan for 20 years and said this of his Franciscan brother:

“I lived with Father Michael Scanlan, TOR, from 1992-2012, and I can honestly say he was always an inspiration to me. He was one of the most obedient, charitable, humble, and very holy men in our community, and his concern for faithfulness in living out his religious life was a source of respect and imitation for me. The good he has done for the Province of the Most Sacred Heart of Jesus, for the order, and most importantly, for the entire Church is a tremendous source of honor. I thank God he was my brother, my mentor, and my friend…”

Funeral arrangements are pending but will include a viewing and a memorial Mass at Franciscan University of Steubenville and a Mass of Christian Burial at the TOR Motherhouse in Loretto, Pennsylvania. Details will be posted when they are available here.

For more about Father Michael Scanlan, TOR, comments from those who knew and worked with him, plus videos of Father Mike and an opportunity to share your own memories and prayers, visit Franciscan University’s tribute page.