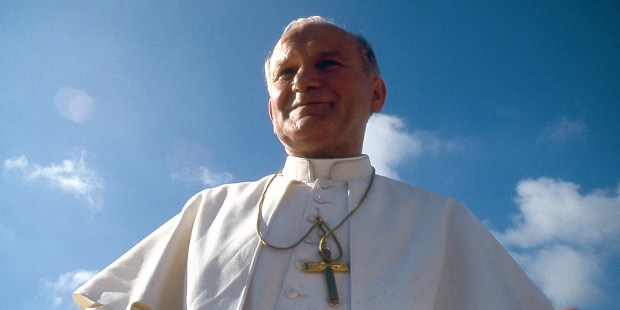 In one of those strange twists, the deportation of priests by Nazis helped produce a modern saint

The influence of St. John of the Cross, the great poet and mystic of the 16th century, reached across the centuries and inspired a simple tailor in Nazi-occupied Poland to yearn for sainthood. In turn, this ordinary man became the catalyst for the vocation of another man who would eventually become pope. The tailor’s name was Jan Tyranowski. The man who would one day be pope was Karol Wojtyla.

Born in Krakow in 1900, Jan Tyranowski was the son of a tailor. His dad had bigger plans for his boy and Jan became an accountant. Jan was a bit of a loner and enjoyed being by himself, allowing his abundantly curious mind to fill his spare time.

He loved science, studying foreign languages, gardening and even the new science of psychology. He especially loved photography. Even though he kept his mind filled with the wonders around him he knew something was missing. He felt an emptiness, an unexplained void, which he could not fill.

Jan took ill in 1930 with a chronic and debilitating stomach ailment; he left accounting and took up tailoring with his father. Amazingly – perhaps with his stress levels reduced in his new job — Jan became a much happier man. His faith also began to increase and he became more and more active in his parish.

Then came Jan’s “enlightening.” It happened at a Sunday Mass sometime in 1935. During the homily, he heard the Salesian priest say, “It is not difficult to be a saint,” and that unprecedented thought changed Jan’s life forever.  He had thought sainthood was only for priests and religious, that was no room in the saintly realm for lay people … or was there?

Jan Tyranowski listened and realized the spirituality he thought of as other-worldly was available to him, too. All he would have to do was embrace the work needed to attain it. He left the church that Sunday a changed man.

He began praying and meditating every morning for up to four hours, and then devoting other parts of his day to prayer and reflection. He asked a parish priest for advice on high quality reading material and the priest gave him a prayer manual he had used in the seminary. Jan poured through the manual, eventually coming across the works of St. John of the Cross. The writings of this saint became his constant companion for the rest of his life.

By 1940, more than half the priestly population of Krakow had been deported. One of the parish priests asked Jan if he would become more involved with the youth ministry in the parish. Jan became the youth leader at St. Stanislaus Parish, which also happened to be the university parish attended by a young man by the name of Karol Wojtyla. Karol had hopes to be an actor.

Jan had an innate ability to inspire spirituality in others. At first, Karol was turned off by Jan Tyranowki’s seemingly overbearing and strict manner of dealing with prayer and meditation. But when Jan formed a “Living Rosary” Karol began to soften.

Karol Wojtyla’s dad died in 1941. The young man had no immediate family and before long he became an eager recipient of Jan’s guidance. When Jan introduced the works of St. John of the Cross to young Karol it affected Karol the same way it had affected Jan. It changed his life. The 16th-century mystic became one of the future pope’s lifelong inspirations. Jan Tyranowski became something of a father figure to Karol. They became great friends and often walked together talking about the things of God.

Karol Wojytla was ordained a priest on November 1, 1946. Jan Tyranowski died on March 15, 1947. He had lived to see his favorite student attain the priesthood.

Pope John Paul II credited Jan Tyranowski with causing him to recognize his vocation and reject an acting career. He wrote of his mentor:

“He was one of those unknown saints, hidden amid the others like a marvelous light at the bottom of life, at a depth where night usually reigns. He disclosed to me the riches of his inner life, of his mystical life. In his words, in his spirituality and in the example of a life given to God alone, he represented a new world that I did not yet know. I saw the beauty of a soul opened up by grace.”

The Salesians of Don Bosco have presented Jan for beatification and he has been declared a Servant of God.  We ask Jan Tyranowski to pray for us all.