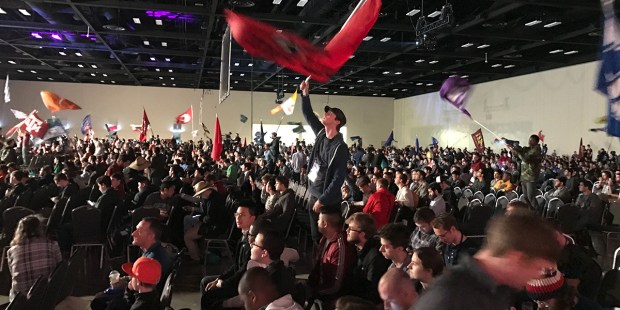 A priest leaves changed and inspired: “Clear moments of conversion were showing themselves, over and over, penitent after penitent, in the confessional.”

Some 13,000 Catholic college students gathered last week in San Antonio. They came from every part of the country. From universities and colleges large and small. From nearly every state. From colleges, Catholic and secular, offering impressive campus ministries to small or none all.

They came from Ivy League schools and from community colleges. They carried school flags and banners and wore plenty of swag to participate in Seek 2017, a biannual convention of the powerful campus ministry program known as the Fellowship of Catholic University Students, or FOCUS.

It was my first time attending the conference but it certainly won’t be my last. I came to Seek 2017 to learn more about FOCUS and the effective work they do on college campuses across the nation. I came to experience the goodness I’ve already heard about, to help minister to the students, and hear their confessions, and to just be there.

I didn’t expect to leave changed, but changed I am.

If one’s heart is open, it is impossible to be in the midst of palpable joy and not become infected by it. In listening to the talks and the conferences, the music and the magnificent liturgies — and the exposure to so much simple holiness — I found myself being both moved and challenged to look inward and to experience a renewal of faith that felt like real conversion. The students felt it; the leaders felt it, and I can say that yes, the priests did, too.

On Twitter, I posted that after hearing two hours of the most intense confessions of my life, I felt exhausted, but also more alive than I had ever felt before. As a priest, I’ll say that we can often tell when a conversation or encounter is particularly important, but it has never before been so clear to me — confession after confession, conversation after conversation — that the Lord was actively changing the lives of the students I was speaking to, powerfully and in real time. Clear moments of conversion were showing themselves, over and over, penitent after penitent, in the confessional.

And as over 300 priests heard these confessions, non-stop for almost three hours, thousands of students worshiped and adored the Lord in the Eucharist. The Blessed Sacrament was processed around the arena and from time to time, as I raised my hand during the prayer of absolution the monstrance would pass in front of me. It was as though the Lord was reminding each of the priests and penitents that he was there, fully present — that he was there to receive and wipe clean our sins, and lift from us our burdens. That he was there to embrace us in a radical way, if we would let him. I cannot express to you the power of a Presence that could not be denied, seeking out the seekers of this gathering.

I spent a lot of time not just hearing confessions but also manning the table for diocesan vocations. I spoke with one young man after another who approached saying he’d never before considered a vocation to the priesthood, but was experiencing that first stirring of possibility. Such a moment can only be received with joy.

Hundreds of priests were at the convention. Hundreds of religious men and women gave witness in an incredibly powerful way through their collars and their habits, their prayer and their joy. One can’t help to be in around all of that and ask the question, what about me?

There were breakout sessions on every topic imaginable that could speak to the lives of college students, and they all filled up, but the sessions on vocations to the priesthood and religious life were consistently at standing room capacity.

Who could have imagined it?

13,000 students and hundreds of priests and religious came to San Antonio, Texas for different reasons. Some maybe came grudgingly. All came broken and battered by the culture. But we were all called to be there.

In the Christmas season just passed, we traveled toward Christ from places near and far, like shepherds and magi, and we found the King, and encountered his great love, his overwhelming mercy and his “marvelous light.” Each of us left Seek 2017 with hearts afire, ready to carry that light back to our own communities and work places. We left convinced that if only we have the courage to trust, Jesus – who is always faithful – will use us toward his purposes, as his willing instruments, to help change lives not just on our campuses but within the world, entire. I cannot wait to see the fruit that arises from the seeds planted at Seek 2017.