“Christ is baptized, not to be made holy by the water, but to make the water holy…” 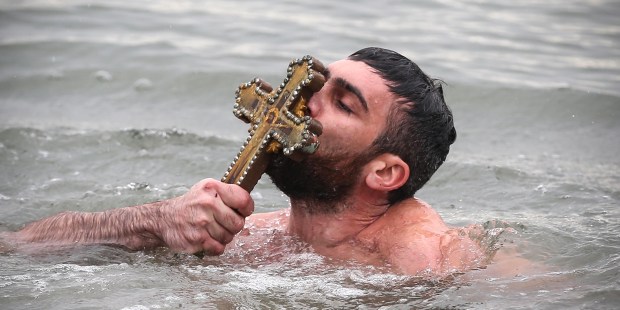 Rather than God’s spirit moving upon the water, Jesus entered and sanctified the water with his very flesh

The phrase “portal of grace” doesn’t appear in the Catechism, but it’s how I’ve always thought of Baptism; we might call the sacrament “The First Ephphetha,” the first means by which we are opened to Christ and to the Christian life which, if it is lived fully and mindfully, must be a continual opening and re-opening, and then a widening to the Savior and to the workings of the Holy Spirit. When we chant with the psalmist “Open wide your mouth and I will fill it” we do well to remember that the same is true for our hearts and our souls. A portal opened to grace must not be blocked.

As much as Christ’s Nativity was “for all the people,” so was his baptism, for in that action was the baptism of the entire planet and everything ever to grow and live and be upon it. The entire earth became opened to the salvific action of Christ, through his baptismal immersion in the water. Saint Maximus of Turin tells us as much in the Office of Readings:

Think of it. The water in your glass, the water in our oceans, the water you bathe your children in, the water that becomes vapor, collected in the clouds and then delivered back to us in the rain, is the same water than has been here from the very beginning — the very same water spoken of in Genesis, where “God’s spirit moved upon the face of the waters.” With Christ’s baptism, God no longer moved upon the face of the water, he was immersed within it — and not thoughtlessly, as a child playing in a river, but God-mindfully; with an intention to save. The whole body of Christ Jesus, intentionally submerged by John (by Christ’s command), enhanced and perhaps exceeded creation; rather than God’s spirit moving upon the face of things, God Incarnate — Emmanu-el — sanctified the water with his very flesh. And the water flowed, and it fed streams and animals and plants, and it rose, and it fell and it renewed the face of the earth in the most mystical of ways, because it was now, and forever more, holy water — literally touched by God, with an intention full of love and mercy. God particles, multiplied into infinity, and all around us, contained in all that grows and flows.

Think of that the next time you are walking amid the trees, and wondering why you feel so euphoric. From the ground, the trees have been fed by this water; they breathe with the air, through which this water has passed. They share God-particles, then, with the very sweat on your brow; the water in your bottle. Let that thought be the foundation of your prayer of thanksgiving.

Think of it the next time you put a compress to a feverish brow: the water has been made holy by Christ. Let that form the basis of your prayer of supplication.

Baptism: once the portal of grace is created — once this first “Ephphetha” has been called forth and we are opened — who is to say what God will do with that entrance-way, or how miraculously he will work his will, in his own way, which is not our way; in his own time, which is not a chronology that aligns with our mortal clocks or calendars, or our perspectives.