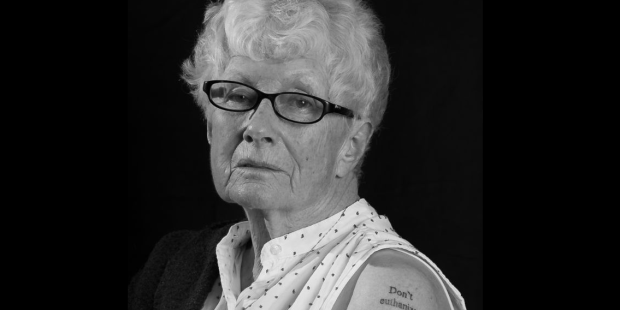 “She doesn’t want to be thrown away,” her daughter said.

Christine Nagel is an 81-year-old grandmother from Calgary.  She’s just had the words, “Don’t euthanize me” tattooed on her arm.

Her decision to get a tattoo comes after Canada legalized assisted suicide last summer.

The tattoo is “drastic,” she admits but told the Canadian news outlet GlobalNews.ca. that it “very clearly says, ‘I’m going to live until God’s ready for me.’”

Nagel said she opposes assisted suicide because she sees people using it as an easy way out of taking care of the sick, disabled and elderly.

“All these old people are darned expensive to look after. And they’re cranky. And they’re messy. And you can’t help thinking, ‘This would be a really good solution.’”

But Nagel doesn’t want anyone interfering with God’s plan for her own life.

“How would you feel if you turned up at the gates, and St. Peter got out the book and said, ‘Just a minute – we weren’t expecting you for another 18 months,’” she joked.

Nagel’s children respect her decision and will honor her intentions.  “She doesn’t want to be thrown away,” her daughter said.

Oregon, Vermont, California, Washington and Montana have legalized assisted suicide, with other states working toward legalization.

But in the past month the American Psychiatric Association has spoken out against assisted suicide for those with mental illness, noting concerns about current practices in the Netherlands and Belgium, where euthanasia is permitted for those who are mentally ill.

“The American Psychiatric Association, in concert with the American Medical Association’s position on medical euthanasia, holds that a psychiatrist should not prescribe or administer any intervention to a non-terminally ill person for the purpose of causing death,” it states.

The assembly warned that “so far, no other country that has implemented physician-assisted suicide has been able to constrain its application solely to the terminally ill, eventually including non-terminal patients as legally eligible as well,” Dr. Mark Komrad of the APA ethics committee told BioEdge. “This is when psychiatric patients start to be included.”

He expressed the possibility that the United States and Canada could go the way of Europe. Canadian leaders are currently pondering “requests made by individuals with mental illness as their sole underlying condition.”

The Catholic Church opposes all forms of suicide as violating the inherent dignity of human life.

Church leaders are actively encouraging greater palliative care to alleviate suffering, while also reminding the faithful of the redemptive value that suffering can have.

Read more: The Secret Privilege of “Offering it Up”