Museum guides lead the blind, and sometimes the blind help the sighted to see 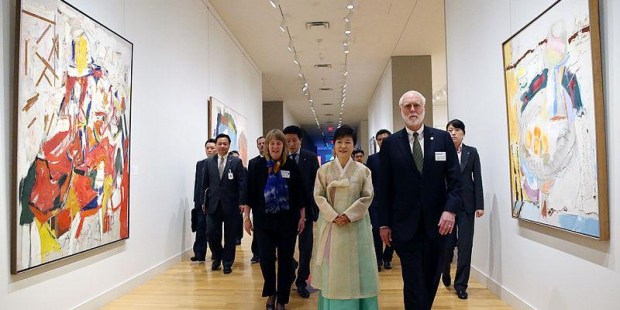 Those who can see often take it for granted: we don’t need a dog or a cane to help us get around. And we can enjoy so much with our eyes: good-looking people and clothing, natural landscapes, and artwork.

That last category is something dearly missed by some people who were once sighted but now have vision loss.

Kilof Legge is one such person. He has had macular degeneration since childhood and has deeply missed art, according to a report on National Public Radio.

“For the longest time I really felt angry when I came into a museum,” he said. “And hurt and insulted, almost. Because these are public places and I felt I was denied access.”

But he is “grateful and excited” to have the art world opened back up to him through tours given by the Smithsonian American Art Museum in Washington, D.C. The museum offers twice-a-month “America InSight” tours, led by docents specially trained to help blind and visually impaired persons “see” artwork.

Docent Betsy Hennigan stops the group of nine visitors in front of “Girl Skating,” a small bronze sculpture from 1907 by Abastenia Saint Leger Eberle. The roller-skating girl is full of joy. The visitors — of varied ages, races and backgrounds — stand close together, hands on top of their long canes, facing Hennigan as she describes the artwork: The little girl careens forward, arms outstretched, her hair and her dress flow behind her.

“Sight isn’t the only pathway to understand art,” said Carol Wilson, who trains the 12 volunteer docents. She suggests the docents invite visitors to imitate the pose of a sculpture and use other senses in their verbal descriptions.

“There’s a red in one of the paintings and I’ve said it’s like biting into a strawberry,” says docent Phoebe Kline.

William Johnson’s painting “Café” depicts a man and a woman sitting side-by-side, having a drink in a jazz cafe. “There’s no way you can see music in this piece,” says Hennigan, “but I ask them to imagine hearing jazz. … Can you smell cigarettes? Can you smell the alcohol?”

Docent Edmund Bonder uses real music to help bring to life a painting of a young woman at a piano. He describes her fingers on the upper right part of the keyboard, and then plays some classical piano music on his smartphone right in the middle of the gallery. …

Touch, of course, also helps visually-impaired people to “see,” and the tours allow people to don protective gloves and feel the artwork. This actually helped not only the blind but one of the docents to gain a deeper appreciation of a particular work.

When a 6th-grader felt Hugo Robus’ sculpture “Water Carrier,” she commented, “Oh, she’s pregnant,” Phoebe Kline said. “And I had never thought about that. But in fact, the figure does look like a pregnant woman. Here was a kid really showing me something that I had been looking at for 35 years, probably, and had never noticed.”

The program seems to be part of a trend. According to the Washington Post, some great museums, such as the Uffizi in Florence and the Prado in Madrid, provide 3-D models of certain paintings for visitors to touch. But at several U.S. museums, visitors can handle original works:

The Minneapolis Institute of Arts’s “Touch Tours” allow blind and low-vision visitors to touch selected works. Similar programming is offered at New York’s Whitney Museum of American Art, the Museum of Modern Art and the Metropolitan Museum of Art, as well as the Philadelphia Museum of Art and the Cincinnati Art Museum. …

At the National Gallery of Art, blind visitors can’t touch the art, but sometimes there are models, such as a heavily painted surface to approximate touching a van Gogh. And the museum recently increased its “Picture This” tours, which offer verbal descriptions, from once to twice a month, says Lorena Baines, the museum’s manager of accessibility programs.