5 Saints whose patronage came from the way they died 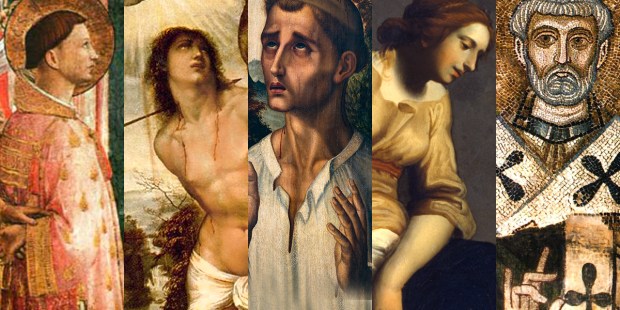 All of them are martyrs, and each of them has become forever linked to something related to the way they bravely died for the faith.

But just how do the saints in heaven get attached to their patronages?

There’s no set rule — some patronages spring from what disease struck a certain saint, or the types of ailments they interceded for while on earth. But for these five saints listed below, the link is clear. All of them are martyrs, and each of them has become forever linked to something related to the way they bravely died for the faith.

St. Ambrose is the first to have written about the martyrdom of St. Sebastian, who lived between the years 256 and 287 and is celebrated on January 20.

During the reign of Diocletian in Rome, Sebastian was sentenced to die a martyr’s death by being tied to a tree and shot with arrows. A work known as “The Life of Sebastian” speaks of what happened next, “And the archers shot at him till he was as full of arrows as an urchin is full of pricks, and thus left for dead.”

Surprisingly, the arrows failed to kill Sebastian, and he was rescued. A violent death would eventually catch up with him, however, as he continued to defend his faith publicly and was captured and beaten to death at the emperor’s request.

In line with the original attempt on his life, St. Sebastian eventually became known as the patron saint of archers, and continues to be depicted with arrows.

St Agatha of Sicily is a virgin and martyr who lived between 231 and 251, and whom we celebrate on February 5.

She is one of just seven women whom we commemorate by name in the Canon of the Mass, and this is partly because of the horrific suffering she endured for Christ and His Church. She dedicated her virginity to God at the age of 15, and bravely rejected the advances of a Roman prefect. Embarrassed with the rejection, the prefect had Agatha sent to a brothel, where she went on to confound the madam with her dedication to her virginity and her God.

She was eventually sent to prison and suffered various forms of torture, including having her breasts cut off with pincers. She eventually died in prison during the reign of Decius.

Due to the way she was tortured, she is commonly depicted with her severed breasts on a plate, similarly to how we often see St. Lucy (patron of eye diseases) holding her eyes (she was tortured by having her eyes gouged out). It comes as no surprise that St. Agatha is now invoked as the patron against breast cancer. (She’s also the patron of bell makers, because some misinterpreted artistic depictions of those breasts on the plate as bells.)

St. Stephen is well known for being the first martyr in the history of Christianity, with his death being recorded in the Acts of the Apostles. In the West we celebrate his feast on the day after Christmas.

His story is also important because of the fact that the future Apostle to the Gentiles, St. Paul (known then as Saul of Tarsus), stood by and witnessed his death. The Book of Acts records Stephen’s speech to the Sanhedrin, prior to his stoning, in addition to his cry just prior to his death, “Look! I see heaven open and the Son of Man standing on the right hand of God!”

Since he died for the faith by stoning, St. Stephen is known as the patron saint against headaches, and he is commonly depicted with a stone atop his head. Traditionally counted as the first deacon chosen by the Apostles, Stephen is also honored as the patron of deacons and as the Proto-Martyr — the first to give his life for Christ.

Few details are known about Pope St. Clement, who headed the Church from 88-99 and whom we celebrate on his feast day of November 23.

History seems to indicate Clement was consecrated by St. Peter himself, and to this day we still have a genuine writing from Clement to the Church in Corinth.

Clement was banished from Rome during the reign of the Emperor Trajan and sent off to work in a stone quarry, where he ended up converting a great number of fellow prisoners.

He was eventually martyred by being tied to an anchor and tossed from a ship into the Black Sea.

Thus, Pope St. Clement I is now known as the patron saint of mariners.

Lawrence of Rome lived from 225 to 258 and is celebrated on his feast day of August 10.

Lawrence was one of the seven deacons of Rome under Pope Sixtus II. St. Lawrence was in charge of the alms collected and given to the poor, and was at one point asked by the prefect of the area to turn over the treasures of the Church. Instead of bringing the alms that he had collected, he brought forth the poor themselves, and boldly proclaimed that these people were truly the Church’s treasures.

Predictably, this led to St. Lawrence’s capture and eventual martyrdom.

Lawrence was sentenced to be grilled alive, which makes him the saint invoked by roasters, cooks and chefs.

He’s also known as the patron saint of comedians, due to his well known cheerful remark as he was being burned, “I’m well done on this side. Turn me over!”

Learning the reasons certain saints are connected to certain patronages can be a great opportunity to learn more about the lives they led and how their example can help encourage us as we continue our journey with Christ.

With these martyr-saints, it’s also a way to understand how their heroic witness impacted not just the lives of those around them, but countless faithful down through the ages.