“Sacrifice everything” for physical beauty? Pope Francis laments woman’s choice of abortion to keep her figure 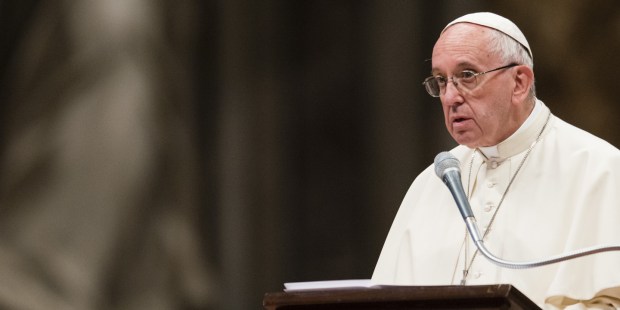 In latest catechesis, the pope warns against placing hope in false idols and fortune tellers (Video)

VATICAN — Pope Francis today warned against the temptation of seeking security by trusting in false hopes offered by idols, such as money, power or physical beauty.

In his general audience catechesis, he gave a “painful” example of someone who would “sacrifice everything” for physical beauty.

“What I heard years ago … was unpleasant to hear and pains the soul,” the pope said. “A capable woman, very beautiful, bragging about her beauty, was commenting, as though it were natural: ‘Yes, I had to get an abortion because my figure is very important.’”

“These are idols, and they lead you down the wrong paths, and do not bring you happiness,” he said.

When ideologies, wealth, power, or success, or values such as physical beauty and health become idols, he went on, they “confuse the mind and the heart, and instead of fostering life, lead to death.”

In the sixth catechesis in his new series, Pope Francis called hope “a basic human need: hope for the future, belief in life, and so-called ‘positive thinking.’” But he stressed how important it is that hope “be placed in what can truly help our lives and give them meaning.”

“This is why the Sacred Scripture warns against false hopes that the world presents to us, exposing their uselessness and revealing their senselessness,” he explained.

The prophets and authors of the wisdom literature, in particular, denounce the falseness of idols that men make the object of their hope. In doing so, he said, they touch on a crucial point of a believer’s journey of faith.

“Faith means trusting in God,” he said. But sometimes when we “collide with the difficulties of life,” we feel the need to look for other assurances, and more “tangible, concrete securities.”

“I trust in God, but the situation gets a bit unpleasant, and I need a certainly that is a little more concrete. And this is where the danger lies!” Pope Francis said. “Then we are tempted to seek fleeting consolations that seem to fill the void of loneliness and soothe fatigue of believing. We think we can find it in the security that money can give, in alliances with the powerful, in worldliness, and in false ideologies.”

“Sometimes we look for a God that can bend to our requests and magically take action to change reality and make it as we want,” he said. But these idols are useless, “impotent and deceptive.” And yet, he acknowledged, “we like idols, we like them very much.”

Leaving his prepared text, the pope recalled how, in Buenos Aires, people would line-up to pay fortune-tellers to read their palm. (Watch the video below).

The pope somewhat humorously recalled: “You would give him your hand and he would begin, but the conversation was always the same: there is a woman in your life, a shadow is coming, but everything will turn out well … and then, you paid.”

“And this gives you security? It is — allow me to say the word — a stupid security,” he said.

“Going to a fortune-teller or a card reader: this is an idol!” but one to which we can be “very attached” and are willing to pay for, he continued. “Meanwhile, the hope that is free, that Jesus Christ has brought us, in freely giving His life for us, sometimes we don’t trust in that too much.”

Pope Francis turned to Psalm 115 and its depiction of the falseness of the idols that the world offers. The psalm reads:

The psalmist presents us with the fleetingness of idols,” the pope explained. “And we need to understand that we are not dealing only with depictions made of metal or other material, but also with those constructed by our minds, when we trust in limited realities that we transform into absolutes, or when we reduce God to our patterns or ideas of divinity; a god that resembles us, one that is comprehensible, predictable, just like the idols of which the psalmist speaks.”

Many times, we can be more content to seek short-lived hope that a false idol gives us, than the “great and sure hope that which the Lord gives to us,” he observed.

We in the Church can also run the same risk of “making ourselves like the world,” the pope acknowledged.

“We need to remain in the world, but defend ourselves from the illusions of the world … we need to trust and hope in God, and God will bless us.” Psalm 115 continues:

“The Lord is always mindful of us,” Pope Francis said. “Even in the most unpleasant moments, he is mindful of us. And this is our hope. And hope does not disappoint. Ever. Ever. Idols always disappoint: they are fantasy; they are not reality.”

Pope Francis concluded: “This is the stupendous reality of hope: trusting in the Lord makes us become like him. His blessing transforms us into his children who share his life.”

When we enter into the scope of his mindfulness by trusting in him, he said, “our hallelujah will arise, our praise of the living and true God, who for us was born of Mary, died on the cross and rose again in glory. In this God we have hope, and this God — who is not an idol — never disappoints.”