4 Whispered words that drowned out the gunshots 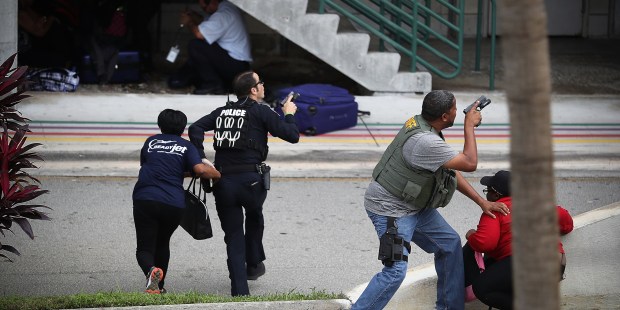 While Annika Dean, a 42-year-old mother of two, waited for her luggage in the Fort Lauderdale airport, she heard shots ring out. There was nowhere to hide and as she lay on the floor, a man suddenly jumped on top of her to shield her from the gunman. As bullets whizzed around them, the man quietly whispered to Dean, “I will protect you.” His name is Tony Bartosiewicz and he made it through the ordeal alive, as did Dean, a teacher from Florida.

Bartosiewicz, a 70-year-old retired electrician from Rochester, New York, was in the baggage claim area when the shooter opened fire on passengers. According to the Miami Herald, he “dove to the floor and miraculously remained unharmed, even as the shooter walked toward him and began to shoot over him.” His daughter Jenny Miller says he called her 10 minutes later to let her know he was safe. But “he was really shaken up and could barely speak,” she said.

But Bartosiewicz didn’t tell his daughter about how he protected a stranger. She only learned about it later that night when Dean contacted Miller’s brother through Facebook. When Miller called her father, who was waiting to board a cruise ship with his wife, he didn’t want to talk about it.

She was not surprised to learn what he had done. “He’s always been very selfless,” Miller told the media. “He always tries to find the positive in things. He’s always been a very amazing guy.”

To say that Dean was grateful for Bartosiewicz’s selfless act is an understatement. “He basically climbed on top of me and told me he would protect me,” said Dean. “I knew he might be a victim, but I also knew I would survive.” She said after what felt like a minute and a half of gun shots, police arrived and detained the shooter. She was safe, thanks in large part to Bartosiewicz.

Bartosiewicz may be a man of few words when it comes to his own heroic action, but it was the promise in those four whispered words — “I will protect you” — that shielded Dean as powerfully as his body. May we all have the grace to have the right words and the action to back them up in times of need.