Our lives played to the camera: Must every meaningful moment involve staging? 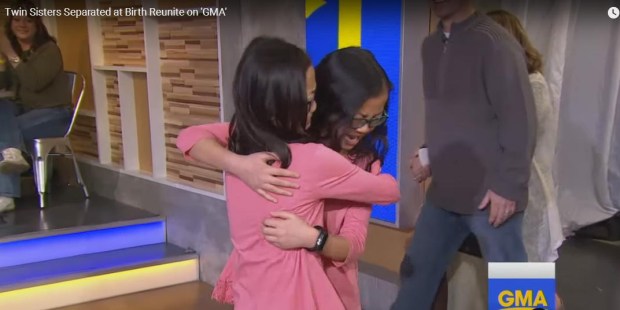 We can perform for the camera and tape it, or we can experience it, but we really can’t do both

Over at For Her, Dena Dyer has a piece on twin sisters, adopted by different parents, and reunited, and she dares to ask the question: Should we really be watching this?

I applaud the parents for wanting to share such an emotional and joyful reunion with the rest of the world…But part of me did think, why should I be privy to this intimate moment? …

Why do we think we need to share everything with strangers? Call me a curmudgeon, but I believe some things should be private. Engagements, for one; auditions, for another. (I know I’m probably in the minority about that one, but I can’t get my head around it: who really wants to audition in front of millions of people? Rejection is hard enough without sharing it with the world).

Our tendency to over-share has been accelerated by the popularity of reality television, shows which give big cash prizes to funny videos, and the “record” button on our favorite apps. We’re now seeing an unprecedented number of ordinary life events unfold in real time, right before our eyes. Combine that with our all-too-human tendency to prioritize fame over substance and wealth over simplicity, and you have the commodification of everyday moments.

Yes, indeed! We are cannibalizing each other for our entertainment, feeding off of each others joys and sorrows, wins and disappointments like passive voyeurs who have found a safe way to feel emotions without actual personal entanglement. We get a thrill, they get the 15 minutes of fame Andy Warhol predicted, and then we seek out the next bit of video, with insatiable appetite.

I agree with Ms. Dyer. I’m weary (and leery) of private, intense moments in our lives being put off, held up, or choreographed in order to best play to the cameras and “get it all down.” This is why I stopped taking video of my kids.

It was when I went to put my older son on the school bus for the first time. I hadn’t thought to bring the video camera. Not having one, I was able to observe what the other children were going through. Nervous and antsy about school, they weren’t getting re-assuring hugs from Mom. Mom was saying, “stand over there, by the fence, get Mark into the picture – okay guys, where are you going today?” And the children, nervous but obedient dutifully replied, “to school…”

“No, we’re in kindergarten…”

I know, it’s cute, and I don’t wish to sound like a curmudgeon, but what I realized that day was that a whole rite of passage was being shunted aside, for the camera. When the bus came, the camera focused on it. Then the door opened, and the parents videotaped the driver saying good morning and giving her name. Then, one-by-one, each child entered the bus taking stage direction. They posed near the first step, turned and smiled and waved and disappeared inside the vehicle. Only my son got to hold Mom’s hand as he advanced into this new experience, got the quick hug and the vigorous wave as the bus left. Everyone else was busy taping the bus until it turned the corner.

I came away from it thinking, “you can tape it, or you can experience it, but you really can’t do both.”

More to read: Paparazzi Parents: This is a shot you won’t want to miss

There are some moments that really need to be experienced fully — whether it’s the first time your kid gets on a school bus, or something like this sisterly reunion. We talk about being “present to the moment” and about teaching our children mindfulness and presence, but then we put an intrusive camera, and an awareness of an audience, which can introduce self-consciousness, and it becomes impossible to have a full and natural experience.

Brides will tell you they look at their wedding pictures and don’t have an actual memory of they’re looking at because they were so distracted with getting the shot right that they didn’t get to really experience the moment. Dads will tell you they don’t remember actually watching the Disney parade they were filming, because they really hadn’t. If adults can’t both hit their marks and fully experience a vivid moment, kids can’t be expected to do it, either. This is one profoundly true reason why parishes try to discourage taking photos or video of children receiving their First Holy Communion. The first physical encounter with Jesus shouldn’t be a distracted one.

Cameras are ubiquitous, and whole generations have grown up playing to them and then sharing their “product.” Perhaps I am simply weird, but I wish it were not so. I would just as soon see a picture of these two girls after they’d met and had time to process it all, and read that story, than feel like I’m intruding into (and perhaps diminishing) signal moments in people’s lives.

I wonder, if everyone had been busy videotaping Jesus, would they have actually absorbed a word he said, or would they have slapped up a selfie to Twitter and a minute-long ‘scope to You Tube, and just offered him up to the mobs in that piecemeal and forgettable way?