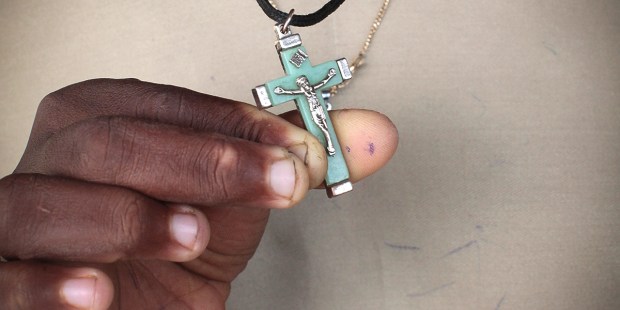 Wearing the cross is a promise, an invitation, and a reminder to myself

The first known image of Christ Crucified — on the wooden doors of the Roman Basilica of Santa Sabina on the Aventine Hill — dates back to the 5th century. Prior to that, Christians did not portray the means by which Jesus died. It was represented by the so-called crux gemmata, or jeweled cross, fashioned of gold and adorned with precious stones, but without the figure of the Crucified Christ, and even these representations appeared only in the 4th century.

Until then, Christians avoided representing the cross. Not so much because it was prohibited, but because of the controversial nature of the symbol. For at least two centuries after Christ, crosses on which slaves died an agonizing death continued to line the roads of the Roman Empire. The cross was therefore a very ambiguous symbol, and one that aroused questions.

And that is why I wear the cross. It should arouse questions — in me! Because on the one hand, Christ Crucified had “neither state nor beauty” (cf. Isaiah 53:2-3); and on the other, it was precisely within the context of the announcement of the cross that the Father said to him from heaven: “You are my beloved Son, in whom I am well pleased” (Mt. 3:17). The cross that I wear around my neck reminds me to ask myself, “Am I pleasing to the Father? Is he pleased with my thoughts, with my decisions, with my words, and with what I do? Do I accept the cross in my life, given that I wear a miniature cross around my neck each day?” Wearing a cross around one’s neck is therefore a daily invitation to a very simple examination of conscience.

Read more: 4 Ways to Keep the Devil Away

I don’t wear the cross to make a show. The cross that I wear around my neck is not the manifestation of my personal holiness or my point of view. Wearing a cross around one’s neck doesn’t mean anything good about me. The very fact of wearing it doesn’t automatically bear witness to the One who died on the Cross. The cross has appeared on many flags and emblems and not all of them were carried with good intentions.

I wear the cross because in a world of endless struggles, protests, and battles, it is the anchor of the boat of my life, which is moored to another world. I wear it in order to remember that the land from which I come, and to which I will return, is different than here. It is like a standard behind which I march slowly towards the beginning of the kingdom of truth and life, a kingdom of holiness and grace, a kingdom of justice, love and peace.

The cross is not a talisman, or an amulet. I don’t wear it to protect myself from misfortune, or to change anything on my journey irrespective of my will. I can still be hit by a car, have cancer or lose my job with a cross around my neck. Likewise, I can still deceive, spread slander and be a nightmare for those who must live with me every day while wearing it. That’s because the cross will not magically change either me, or the reality around me. The transformation, or Passover, of my life and of the world around me can only be accomplished by God — the Lord of all reality and of my heart.

But wearing the cross reminds me of the One to whom all this belongs, and the One who has the last word. It reminds me that I have been purchased “at a great price” (1 Corinthians 6:19-20), and that He who has redeemed me and cleansed me in His Blood has no intention of abandoning me.

A cross around my neck is a promise and an invitation to allow Him to work in me, and always with me. To work with Him for my salvation. Here and now. Right where I am, and in the areas where I’m struggling.

Jesus offered himself on the Cross to “draw all things to Himself” (cf. Jn. 12:32). He died and rose, and yet in a certain sense the drama of my salvation continues.

Pascal wrote that Christ’s agony will continue until the end of the world. One must not sleep then. I wear the cross because I need a “wake-up call.”