More than apostasy: What we’re not talking about with “Silence” 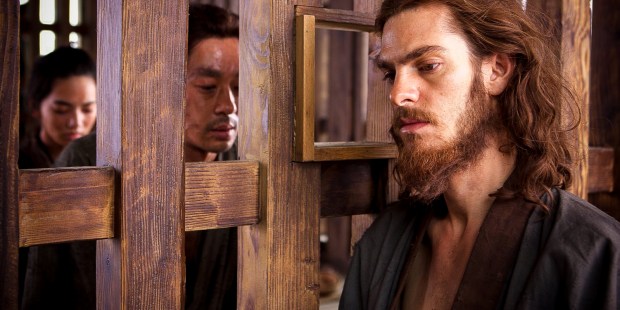 For those who question the merits of “Silence” for the faithful, here are some things worth pondering and discussing.

When I first read Silence in grad school, everybody wanted to talk about The Quandary. It was the same when I taught the book to high schoolers a few years later. They all wanted to know: did he do the right thing? Was it okay to step on the fumie, an act that even the Inquisitor called a formality, to save the lives of people who had already apostatized?

It’s a good question and an important conversation. That’s why so many of the reviews I’ve been reading revolve around this issue. But to my mind, it’s not the point.

There’s so much more in this film, as indeed there was in the book, so many moments of powerful faith and challenging rebuke, that to evaluate it all on how the director views Fr. Rodrigues’s apostasy is beyond unfortunate.

I sympathize with those viewers who are concerned with Scorsese’s apparent approval of apostasy as an act of compassion. I even understand that Rodrigues’ failure ultimately colored the whole film for them. There is a danger, for weak souls, that blithe acceptance of this action could lead to moral relativism and utilitarianism. But the fall of the hero doesn’t make the entire movie worthless, particularly not when you see how tortured he was afterwards.

As I sat in that theater, too caught up in the movie to eat my $9 popcorn, there were a hundred moments that I wanted to pause the film to pray, to write down a line for later reflection, to beg mercy for my own failings. These are the moments that we need in film and the conversations that art inspires in a way that even theological treatises can’t. For those who question the merits of Silence for the faithful, or who want some guidance for their discussions after seeing it, a few thoughts.

1. I don’t understand Rodrigues’ choice. This isn’t because I’m more virtuous than he is. It’s because I find it easier to endure other people’s pain than my own. I judge Rodrigues more harshly because he caved to a temptation that I don’t struggle with. How often do I do the same with real people?

2. Every time I recommend this book to someone, I tell them, “It reads like the Stations of the Cross.” I see Rodrigues persevering because he connects his suffering to Jesus’. But Ferreira calls this identifying of his pain with Christ’s arrogant. Is it possible for suffering to be redemptive if it isn’t united to Christ’s in that way? At what point does identifying with Christ become arrogant?

3. After his apostasy, Rodrigues was obviously miserable. Why didn’t he ever recant? Surely there must have come a point when there was no longer danger that others would be killed for his faith. Was it pride that kept him living that life, an attempt to convince himself that he’d done the right thing? With the final shot of the crucifix he’d kept for so many years, Scorsese implies that he maintained some sort of faith in the midst of all his actions to undermine Christianity in Japan. At first that shot gave me hope, a feeling that, in spite of the apostasy he’d felt compelled to commit, he really did love Jesus and long for him. But the more I thought about it, the more his life seemed a betrayal. It’s one thing if he convinced himself, as Ferreira seemed to, that the Gospel wasn’t true. But to work against the God he loved, to do it day after day for decades? That seems to me far more vile than the initial moment of failure.

4. Most orthodox Christians, I think, would assert that the “voice of Jesus” telling Rodrigues to trample wasn’t really a locution but a temptation or a mental breakdown. How can we discern that in the moment? Ignatius himself tells us that God won’t call us to do something objectively wrong, which brings quite a lot of clarity in this situation. But when it’s more gray even than this, how can we know which is the voice of truth and which the voice of the world, the flesh, and the devil?

5. Most stories of martyrs depict them as dying joyfully and those who look on rejoicing that they’ve been found worthy to suffer for Christ. This film has quite a lot of agonized sobbing, even when one man is (mercifully) beheaded rather than killed in some incredibly slow and painful way. Is this a function of Scorsese’s fundamental failure to understand the faith? Have we over-romanticized martyrdom and this is more realistic? Is there a cultural component that I’m missing?

6. In the scene in which the villagers were drowned, these men who had been depicted as dirty and repulsive, true savages, became dignified. When Mokichi sings (was it some version of the Tantum Ergo?) after 4 days of near-drowning, he reminds me what it is to live and die for Christ. For that scene alone, there’s a lot I would forgive this movie.

7. After his first interview with Rodrigues, the interpreter walks out of Rodrigues’ cell and makes a comment about Rodrigues’ arrogance, following it with a declaration that he would fall. It was all I could do not to pull out my phone and write that quotation down word for word. That idea transformed how I viewed martyrdom and, honestly, how I view myself. It had me looking up confession times and prepared me for confession better than any examination of conscience I’ve ever seen. Those who are humble don’t have so far to fall, so perhaps some of it is just that the devil puts less effort into them. But more than that, their faith is built on Christ. Rodrigues’s faith, sincere as it was, was shored up by his awareness that he was strong and brave and educated. Had he been weaker, Christ could have been stronger in him.

8. Who would you rather be on Judgment Day: Rodrigues or Kichijiro?

9. Ferreira claims that the Japanese aren’t capable of accepting the Gospel, despite the 300,000 converts made in 50 years. It’s worth discussing this question, the central one of Endo’s life, of how inherently western Catholicism is and what can be done for more authentic inculturation. What struck me more, though, was his insistence that the Japanese hadn’t truly embraced Christ, only their false, nature-worship understanding of him. And yet they died for him. I think that to have that strength they must have known him. Even if they didn’t, even if they were worshiping the sun and calling it Jesus, is that enough? Does God demand doctrinal accuracy or are our best efforts enough?

10. Even at the beginning, Rodrigues told the villagers to trample on the image, yet he held out for months. Why did he hold himself to a different standard? Is it okay that he had higher standards for himself or did that lead to his downfall? How can we be merciful to others while striving for sainthood without falling in the same way?

11. The hunger the villagers had for the Sacraments puts me to shame. Their joy at the coming of the priests, despite the risk they knew it brought, their desperate need to confess their sins–all this reminds me how much I take God for granted. See how they love him!

12. Rodrigues’ act of apostasy is an obvious one and most of us would recognize (at least intellectually) that nothing justifies apostasy. But are there smaller acts of apostasy in my life that I’ve justified because they’re motivated by compassion or prudence or convenience? Are there certain actions that I recognize are inherently evil, or do I think that sometimes the ends justify the means? How has this impacted my opposition to abortion or torture? Have I compromised on something small and seen it snowball? What venial sin do I need to cut out in order to be safe from mortal sin in the future?

13. If you’ve read The Power and the Glory by Graham Greene, compare Rodrigues and Greene’s whiskey priest. What does the juxtaposition of those two characters tell you about pride and sanctity?

14. What were the differences between Rodrigues and Garrpe? If their circumstances were reversed, would Rodrigues have died a martyr and Garrpe an apostate? Or was there something that separated them even before that? Do you think you could endure what Rodrigues did and remain faithful?

15. Spend some times studying the history of the Church in Japan, particularly the era of the Hidden Christians. Learn about Ven. Takashi Nagai, Ven. Satoko Kitahara, and the Japanese Martyrs. Expand your horizons to Chinese and Korean Saints, too. There are ten times as many Chinese Catholic Saints as there are American Catholic Saints. This is not a western Church or a white Church or an English-speaking Church–it’s the Catholic Church.

16. At one point Rodrigues asks, “What have I done for Christ? What am I doing for Christ? What will I do for Christ?” This famous question from St. Ignatius’ spiritual exercises is worth answering in our own lives, but it also shows just how much this film was formed by the spirituality of St. Ignatius. What other moments might have spoken to non-Christians and called them deeper into relationship with Christ? Could you show this movie to non-Christians in order to start a conversation or is it too Catholic for that? Or perhaps not Catholic enough? Would you show it to (lukewarm) Catholic teenagers or would you be concerned that it would affirm their moral relativism?

17. The title of the film refers to the silence of God in the face of human suffering. Does prolonged silence from God weaken us in the face of such suffering? It didn’t in Mother Teresa’s case–why not? How could Rodrigues have reacted differently to this silence? How could you?

There’s more, of course, but I didn’t go see this movie intending to write a review, so I took no notes and wrote nothing down until days later. But I’ve encountered too many people who are hesitant even to watch Silence simply because they disagree with Rodrigues’ choice and I felt I had to share some of its merits. If you’re concerned that watching a movie with a utilitarian climax will tempt you to unfaithfulness, by all means, skip this one. But there is so little good Christian art being made these days that when a film like this comes along we would do well to praise God for the incredible good in it, despite its defects.