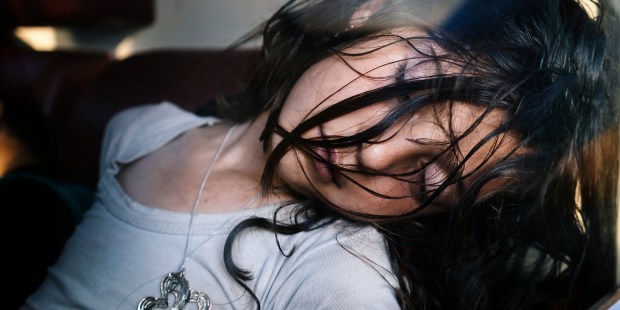 Dimitar Dilkoff via AFP
A young migrant girl coming from Syria sleeps on a train heading north from Nis to Belgrade. Illegal immigrants cross Serbia on their way to other European countries as it has land access to four members of the 28-nation bloc -- Hungary, Bulgaria, Romania and Croatia. Many youth are abducted and sold.
Share
Print
Vatican Insider - published on 01/18/17

February 8th, the feast day of St. Josephine Bakhita, will mark the International Day of Prayer and Awareness Against Human Trafficking.

“They are children, not slaves!” is the theme for this year’s event. Sister Eugenia Bonetti, a Consolata missionary and President of the “Slaves no more” association, who has over many years built an effective network to combat the trafficking of human beings, tells us why the theme is so appropriate:

Sister Eugenia, could you try to explain in general terms what is meant by “human trafficking”?

“It is a form of exploitation of people, which could be labor or sex related or to do with organ transplants; there is also the exploitation of children for many reasons, including adoption; in all these cases we are talking about a ‘trade,’ in other words trafficking. It’s the traffickers who call the shots; they use these situations to make a profit. Traffickers are in charge of managing the trade and it’s the most innocent and poor among people who are caught up in this, those who are trying to seek a better future and often end up in the hands of traffickers; the traffickers are sometimes people no one would ever suspect and they are very cunning in the way they go after their prey.”

How does this occur?

“Essentially the arrival of these people (refugees and migrants) by sea is exploited. Traffickers then get victims to apply for asylum, which most of them will never obtain; it’s mostly very poor female minors who fall prey to the system. They go through the whole process that takes them first to the Libyan coast, then to Lampedusa and once they have disembarked, traffickers convince them to apply for political asylum. This document gets them into the welcoming centers, the so-called SPRAR (Protection System for Refugees and Asylum Seekers) structures; but from that moment on, all the women have is their request for asylum and it could take up to one or two years before they receive a reply. This is where the traffickers come in. By this point, they have given the women financial help to come to Italy, so the women have a huge debt on their shoulders that they pay off through prostitution in the streets.”

So the perverse system is the paying back of debt…

“Yes, a debt they often do not even know the size of. A debt that can often amount to as much 50 or 70,000 euros; it’s usually young illiterate females who are targeted as they are the easiest to blackmail.”

Are you saying that lengthy bureaucracy also facilitates exploitation?

“Yes, and it gets worse. Because once the waiting period for a response to an asylum application is over, these women are by now on Italian territory and they continue to be exploited until the debt is paid off. But when the time finally comes, they are finished, shattered.”

The picture you paint is terrible but where can one start to try to reverse things?

“Prevention and information, both in the countries of origin and in the destination countries. In September I paid a visit to Nigeria. It had been a while since I last went; the country really has been plunged into the deepest of misery. It is full of oil and riches but the poor live on the edge, in villages where there aren’t even any schools; people are desperate, so they are prepared to believe anything, partly because when the madams visit they come with great riches and show that in Europe, in Italy, there is enough work to live well. There is a vast ignorance. So the work we are involved in with the network of nuns, Caritas and the dioceses, is to pass on some messages: Europe and Italy are not the lands of plenty but represent a world of exploitation, you are sending your daughters towards certain death.

Once women have been through this experience, rebuilding their lives is incredibly hard, they are emptied, they no longer have any standards and they are used to being used and thrown back, they have lost their sense of dignity, all they think about is money.”

The pope has spoken out strongly on this…

“His voice constantly drives us, as a Church, as religious institutes; he is a great source of encouragement and a great support. But there is also a need for governments to introduce suitable laws…”