How to love the parent who loves us imperfectly 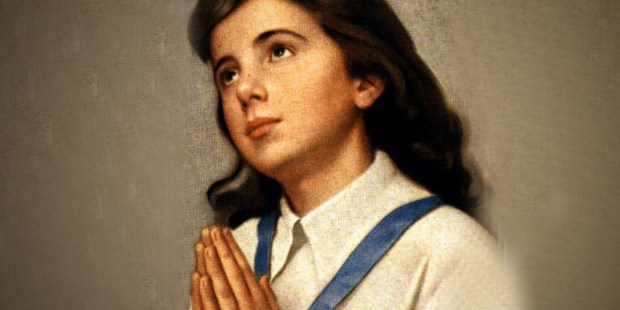 Blessed Laura Vicuña is a beautiful witness for those who have trouble forgiving the broken and flawed who fail at loving us.

The history of the Church is filled with Saints whose love of Christ set them in direct opposition to their parents. Again and again we see the children of pagans threatened or even martyred by their parents. Later in Church history (and often today) we find Christian parents who opposed a vocation, locking St. Thomas Aquinas in a room with a prostitute or trying to drag St. Agnes of Assisi home by her hair. Many of us may identify with those Saints, having lived the reality of Jesus’ words in Matthew 10:35: “I have come to set a man against his father, a daughter against her mother.”

For most of us, the struggle isn’t with parents who hate us but with parents who love us imperfectly. The life of Blessed Laura Vicuña, disturbing as it was, was characterized less by the opposition of her mother Mercedes than by Mercedes’s weakness. Widowed when Laura and her sister were very young, Mercedes’s best option for supporting her daughters seemed to be becoming the mistress of Manuel Mora, a wealthy man who offered to send the girls off to a Salesian boarding school. There Laura’s love for Jesus was abundantly evident to all around her, particularly when she blew kisses to Jesus in the tabernacle and spoke aloud to him as a friend. The witness of the Sisters and the life of prayer impressed upon Laura a need to belong fully to Christ.

After her first year at school, Laura returned home and began to recognize the evil of the life her mother was living, the mistress of a vile man whose drunken kisses upset little Laura. Mercedes attempted to defend her daughter but it was impossible to reason with Mora when he was drunk.

Laura went back to school aware that something was wrong in her mother’s life but seems not to have understood the sinfulness of the situation until her first communion, when she was 10. Laura prayed that day, “O my God, I want to love You and serve You all my life. I give you my soul, my heart, my whole self.” When she realized that her mother didn’t receive communion, she began to pray in real earnest that Mercedes would be converted. “Jesus, I wish that Mama would know You better and be happy,” she would beg.

It wasn’t only Mercedes who was unhappy. Each summer when Laura returned home, Mora paid her more and more attention. Her mother seemed unable to stand in his way and Laura became concerned for her safety. When she was only 10, his advances became so lewd and forceful that Laura spent one night hiding in the woods as he beat her mother for not making Laura stay. Still, Mercedes could see no way out of the relationship. Manuel refused to pay Laura’s tuition for the following year, but the Sisters waived it in an attempt to save her.

Despite her deep concern for her mother, Laura was tremendously happy in her life with the Salesians and began to ask the Lord if he wasn’t calling her to become a Sister herself. Her spiritual director agreed that she had a religious vocation, though when she approached the bishop at age 11, he only laughed and told her to wait.

But God, it seemed, was calling Laura and she could not hold back. Having already given him her heart, she made the offer of her life as a sacrifice for her mother’s conversion. Rather than resenting a mother who was unable to protect her, Laura was willing to offer her life for her mother’s salvation.

A year and a half later Laura became very sick and was sent home for the better climate. Her health in steady decline, Laura believed that God had accepted her sacrifice. But for all her heart was peaceful and loving, her death would not be. Mora continued to look on her with lust and Mercedes was finally given the strength to remove herself and her girls from his influence. The three moved out of his house, but not far enough. Mora stormed into their small home one evening and announced that he was staying. Laura, with all the strength she could muster, announced that she would not and walked out into the night.

Mora followed her into the street with a whip and began to whip her, to kick her. He beat her until she was unconscious and was attempting to carry her away when he saw the villagers surrounding him and threw her on the ground, riding away.

Laura lasted a week. She forgave her killer, begged her family to love God well, and finally revealed to her mother the sacrifice she had made. On January 22, 1904, Laura died. Her mother immediately got up from her bedside, walked to the church, and made her confession, never again to return to Mora. Laura’s life had been offered as a sacrifice and no sacrifice is offered in vain.

There’s something of the Maria Goretti here, of course, in the horrific assault on a young girl who then forgives her killer. But what strikes me here is less her forgiveness of Mora and more her forgiveness of Mercedes. Here is a mother who means well, who loves her daughter but imperfectly. From the outside, we can see just what Mercedes ought to have done differently, but we can’t know the love or fear or sense of futility that ruled her. Sometimes it seems to me that it’s harder to love those who love us badly than it is to love those who hate us. Blessed Laura Vicuña, whose feast day is January 22, is a beautiful witness of forgiving those who fail to love us well. Those who are bound by anger at their broken and flawed parents would do well to look to a little girl who saw her mother’s sin and weakness and loved her still, to the point of death.

Let’s also ask Bl. Laura’s intercession, on this anniversary of Roe v. Wade, for women who feel pressured into making decisions that hurt their children, either before or after their birth. If even as a child she could understand and forgive her mother’s broken love, how much more as a Saint. Blessed Laura Vicuña, pray for us!