Inspiring quotes from past presidential inaugurations 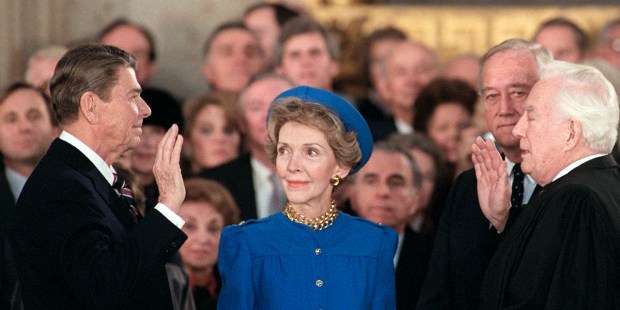 Consolidated News Pictures/AFP
US President Ronald Reagan (C) is sworn in as 40th President of the United States by Chief Justice Warren Burger (R) beside his wife Nancy Reagan (C) during inaugural ceremony, on January 21, 1985 in the Capitol Rotunda in Washington DC.
Share
Print
John Burger - published on 01/19/17

If Donald Trump is at a loss for words on January 20 (not likely), he might draw on speeches by his predecessors

“Among the vicissitudes incident to life no event could have filled me with greater anxieties than that of which the notification was transmitted by your order, and received on the 14th day of the present month.”

—First words of the first inaugural address of George Washington, 1789

“There can be no spectacle presented by any nation more pleasing, more noble, majestic, or august, than an assembly like that which has so often been seen in this and the other Chamber of Congress, of a Government in which the Executive authority, as well as that of all the branches of the Legislature, are exercised by citizens selected at regular periods by their neighbors to make and execute laws for the general good.”

“All, too, will bear in mind this sacred principle, that though the will of the majority is in all cases to prevail, that will to be rightful must be reasonable; that the minority possess their equal rights, which equal law must protect, and to violate would be oppression.”

“If I do not sink under the weight of this deep conviction it is because I find some support in a consciousness of the purposes and a confidence in the principles which I bring with me into this arduous service. To cherish peace and friendly intercourse with all nations having correspondent dispositions; … to avoid the slightest interference with the right of conscience or the functions of religion, so wisely exempted from civil jurisdiction; … —as far as sentiments and intentions such as these can aid the fulfillment of my duty, they will be a resource which can not fail me.”

“It is only when the people become ignorant and corrupt, when they degenerate into a populace, that they are incapable of exercising the sovereignty. Usurpation is then an easy attainment, and an usurper soon found. The people themselves become the willing instruments of their own debasement and ruin. Let us, then, look to the great cause, and endeavor to preserve it in full force. Let us by all wise and constitutional measures promote intelligence among the people as the best means of preserving our liberties.”

“The Government of the United States is one of delegated and limited powers, and it is by a strict adherence to the clearly granted powers and by abstaining from the exercise of doubtful or unauthorized implied powers that we have the only sure guaranty against the recurrence of those unfortunate collisions between the Federal and State authorities which have occasionally so much disturbed the harmony of our system and even threatened the perpetuity of our glorious Union.”

“The appointing power vested in the President imposes delicate and onerous duties. So far as it is possible to be informed, I shall make honesty, capacity, and fidelity indispensable prerequisites to the bestowal of office, and the absence of either of these qualities shall be deemed sufficient cause for removal.”

“…I am moved by no other impulse than a most earnest desire for the perpetuation of that Union which has made us what we are, showering upon us blessings and conferring a power and influence which our fathers could hardly have anticipated, even with their most sanguine hopes directed to a far-off future.”

“We have recently passed through a Presidential contest in which the passions of our fellow-citizens were excited to the highest degree by questions of deep and vital importance; but when the people proclaimed their will the tempest at once subsided and all was calm.”

“…If the policy of the Government upon vital questions affecting the whole people is to be irrevocably fixed by decisions of the Supreme Court, the instant they are made in ordinary litigation between parties in personal actions the people will have ceased to be their own rulers, having to that extent practically resigned their Government into the hands of that eminent tribunal….

“The mystic chords of memory, stretching from every battlefield and patriot grave to every living heart and hearthstone all over this broad land, will yet swell the chorus of the Union, when again touched, as surely they will be, by the better angels of our nature.”

” With malice toward none, with charity for all, with firmness in the right as God gives us to see the right, let us strive on to finish the work we are in, to bind up the nation’s wounds, to care for him who shall have borne the battle and for his widow and his orphan, to do all which may achieve and cherish a just and lasting peace among ourselves and with all nations.”

—Abraham Lincoln, 1865, second inaugural, a month before he was assassinated

“Upon one point there is entire unanimity in public sentiment—that conflicting claims to the Presidency must be amicably and peaceably adjusted, and that when so adjusted the general acquiescence of the nation ought surely to follow.”

“The elevation of the negro race from slavery to the full rights of citizenship is the most important political change we have known since the adoption of the Constitution of 1787. NO thoughtful man can fail to appreciate its beneficent effect upon our institutions and people. … It has liberated the master as well as the slave from a relation which wronged and enfeebled both…. Freedom can never yield its fullness of blessings so long as the law or its administration places the smallest obstacle in the pathway of any virtuous citizen.”

“The conscience of the people demands that the Indians within our boundaries shall be fairly and honestly treated as wards of the Government and their education and civilization promoted with a view to their ultimate citizenship, and that polygamy in the Territories, destructive of the family relation and offensive to the moral sense of the civilized world, shall be repressed.”

“Expenditure should always be made with economy and only upon public necessity. Wastefulness, profligacy, or favoritism in public expenditures is criminal.”

“Much has been given us, and much will rightfully be expected from us. We have duties to others and duties to ourselves; and we can shirk neither.”

“We are provincials no longer. The tragic events of the 30 months of vital turmoil through which we have just passed have made us citizens of the world. There can be no turning back.”

“We have reached a higher degree of comfort and security than ever existed before in the history of the world.”

“This great nation will endure as it has endured, will revive and will prosper. So, first of all, let me assert my firm belief that the only thing we have to fear is fear itself.”

“Let every nation know, whether it wishes us well or ill, that we shall pay any price, bear any burden, meet any hardship, support any friend, oppose any foe, in order to assure the survival and the success of liberty.”

“Freedom and the dignity of the individual have been more available and assured here than in any other place on Earth. The price for this freedom at times has been high, but we have never been unwilling to pay the price.”

“There is nothing wrong with America that cannot be cured by what is right with America.”

“America has never been united by blood or birth or soil. We are bound by ideals that move us beyond our backgrounds, lift us above our interests and teach us what it means to be citizens.”

“In reaffirming the greatness of our nation, we understand that greatness is never a given. It must be earned. Our journey has never been one of shortcuts or settling for less. It has not been the path for the faint-hearted—for those who prefer leisure over work, or seek only the pleasures of riches and fame. Rather, it has been the risk-takers, the doers, the makers of things—some celebrated but more often men and women obscure in their labor, who have carried us up the long, rugged path towards prosperity and freedom.”