Welcome to the YOLOCAUST: Selfies and Extermination Camps 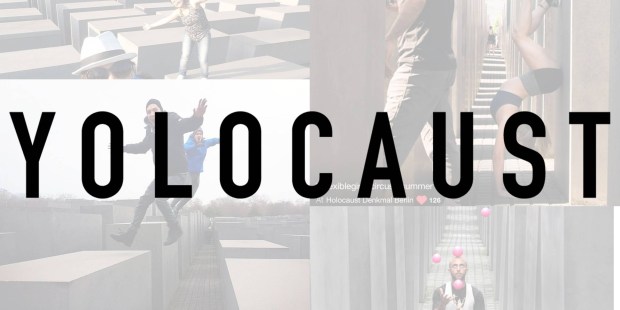 See that selfie you took of yourself dancing on that grey slab? Now move your mouse, and get “woke”

Located in the middle of Berlin, the Memorial to the Murdered Jews of Europe, covers over four acres of bucolic land with 2711 concrete slabs meant to represent graves.

Many young visitors find the memorial to be a great place to jog or bike, or to simply hang out with friends but — as countless Instagram photos of people juggling and posing amid the slabs will attest — they do so with little appreciation of the human horror being memorialized.

It was disgust at this lack of careless sensibility that inspired a project called YOLOCAUST.

Israeli satirist (and millennial) Shahak Shapira, who has lived in Berlin for many years took the many social-media posted selfies of young people posing, laughing and having a good time at the monument, and transposed them over images from the Nazi death camps. As one moves a mouse over the image of a person posing playfully for the camera, you see them posing instead upon a pile of bodies.

Check it out. The images will shake the viewer up, and that’s the point. Shapira means to illustrate to these visitors the history that lies beneath the memorial, so to speak, upon which they are dancing.

The website states, “For many, the gray stelae symbolize gravestones for the 6 million Jews that were murdered and buried in mass graves, or the gray ash to which they were burned to the death camps..”

Shapira’s hope is to raise awareness among younger generations who perhaps do not fully appreciate what the holocaust was about, and to help them realize that a memorial to the murdered Jews of Europe is a solemn space, worthy of some “woke up” mindfulness and respect, and perhaps even a prayer or two?

What are your thoughts on this? Is dancing upon the memory of human slaughter and war crimes is a good way to get history to repeat itself, or do you see the seeming cognitive dissonance to be a hopeful sign that the human spirit is never defeated?