“Churching” — Maybe it’s time this celebration of motherhood was renewed 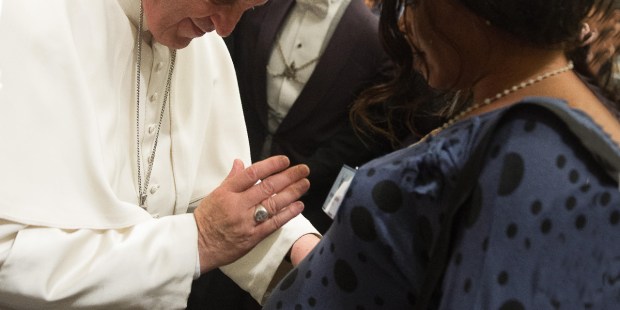 So many young mothers lack the support system of nearby relatives and neighbors; this ancient ritual can give spiritual support

“Long ago,” when I was an altar boy, oftentimes a woman would come up to me (or whoever was serving) before Mass and ask us to tell Father she wanted to be “churched” after Mass. I always said sure and referred the message to the celebrant.

After Mass, Father would remove his vestments, pull a white surplice over his head and drape a white stole around his shoulders. The altar boy would carry the holy water, and Father a lit candle. We would walk out to the side altar and there, at the altar rail, the woman would be kneeling.

Father would hand her the candle and a 10-minute ceremony would begin. I can remember how deeply spiritual the scene always was. The new mom kneeling, holding a lit candle, head bowed, eyes closed, listening as Father read the Latin prayers. It was surreal to me when the new mom (this may have been her first, fourth, fifth or even 10th child) was alone in front of the priest being “churched.” As a boy of maybe 12, this not only embodied but epitomized for me the importance and beauty of motherhood.

Many years later, now a husband and father, I one day realized that my wife, Loretta, had never been “churched.” My oldest is now in his 40s and this practice fell out of use after Vatican II. But maybe it’s something that should come back.

The practice of churching (it has this name because it must take place inside a church) is rooted in Jewish tradition. Our Blessed Mother, as prescribed by Jewish law, presented herself at the temple 40 days after the birth of her Son, to be “purified” and blessed by the priest. This occasion is still celebrated, but with the emphasis on Jesus’ presentation, not Mary’s purification.

The Catholic tradition of “churching” was not a purification ceremony as our Blessed Mother experienced. Instead, churching was the woman’s way of giving thanksgiving to God for the birth of her child, and predisposed her, through the priestly blessing that is a part of the ritual, to receive the graces necessary to raise her child in a manner pleasing to God.

Traditionally, only a sacramentally married Catholic woman could be churched (provided she had not allowed the child to be baptized outside the Catholic Church). It was not a precept, but a pious and praiseworthy custom, dating from the early Christian ages. The ritual of churching was even available to a woman whose child may have been stillborn or who had died without being baptized.

The ceremony was special and I would love to see it return. Young moms today face challenges in their maternal vocation that my wife never faced. Perhaps most difficult of all, so many young mothers are virtually alone, without the support system of nearby relatives and neighbors. Many would undoubtedly welcome a special blessing to call down the graces they need to raise their children in God’s holy will. Churching was mom’s special moment with God, and would be a beautiful practice to renew.

In hindsight, I wish I had remembered about this beautiful ceremony 40 years ago.

For more information on the history of churching and blessings given today, see here: Churching & Blessing