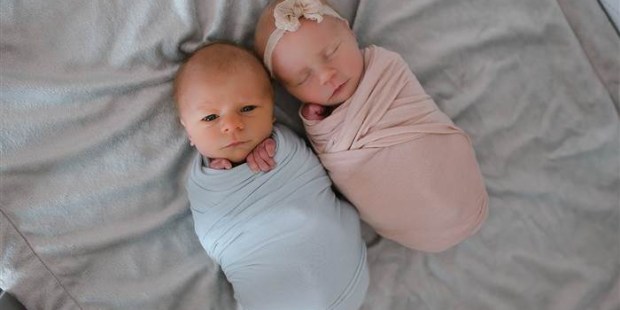 The family was grateful for the precious time they had with their baby and will treasure these photos.

Lyndsay and Matthew Brentlinger were elated when on December 17th they gave birth to a set of twins: one boy and one girl. For years the Brentlingers struggled to get pregnant and were excited to finally be parents.

However, in the final months of her pregnancy, Lyndsay was informed that one of the twins would die either before birth or shortly after. According to Good Housekeeping, “Doctors believed the baby boy, a twin, would be stillborn after discovering heart abnormalities.”

In an interview with Today Lyndsay said, “It was one of the worst days of my life when we found out that we would lose our son with months still left in my pregnancy, but because of that time we were able to prepare ourselves… My husband and I both have a strong faith in God and through prayer, felt His love, peace, and support.”

Defying all odds, the little baby boy (William) was born along with his sister (Reagan) and even though he only lived for 11 days outside the womb, he was seen as a little miracle.

To help preserve the memory of little William, the Brentlingers contacted photographer Lindsey Brown for a last-minute photo session. Brown told CNN, “Being only a few days before Christmas and not being previously booked well in advance, she was hoping due to the circumstances, I’d make an exception.” Thankfully, she was able to find space in her busy schedule and came over to shoot the newborn twins.

For Brown, it was one of the most difficult photo shoots she has ever done, knowing that little William would not last much longer. She explained to Good Housekeeping, “I could not believe how perfect they both looked… William was extremely alert, as if he was trying to take it all in, while little Reagan slept and barely opened her eyes. It was extremely bittersweet the entire time I was there.”

The Brentlingers were eternally grateful for the precious time they had with baby William and will look back on these photos regularly.

“The days with both of our babies at home together were amazing… We tried our best to focus on enjoying the time together and creating memories. We were able to do this and felt like God blessed us with the time to get to know our son… Reagan will hear about her special guardian angel and be able to see the love and special bond they shared together.”