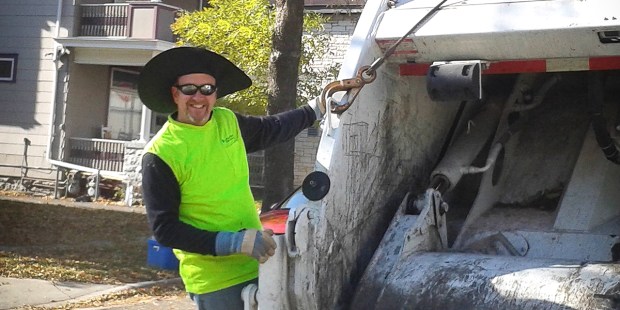 Rev. John Marboe took on the work during lean times, and he keeps going for the rewards it brings

A Lutheran pastor in Minnesota might be accustomed to being called “Reverend.” But John Marboe has put himself in a second job where he might also be reviled.

When Marboe was struggling the pay the bills, he took on a job as a trash hauler, and he’s gotten to know what it means to get dirty—and to get dirty looks.

“Did I ever tell you the story about when I pulled up to an intersection and there was a mother and her little children and her littlest boy just started waving and I was waving,” he asked his daughter in an episode of StoryCorps Friday. “And the mother looked up at me with this kind of concerned look and then grabbed her son. It was almost as though, ‘No, that’s not something you’re going to want to be.’ ”

Though he might not be struggling anymore, Marboe continues to pick up the trash, partly to help him maintain empathy for others and to keep in mind the value of doing things for people.

“I don’t know if I want to say it’s more important, but it’s differently important. You’re doing something for people, and I think especially, I’m aware of that when it’s hot out, when it’s really smelly, when there are a lot of maggots,” he says. “But as a garbage man, I probably know more about people on my route than their pastor does—because their trash tells a story.”

“I looked at it and I thought, ‘You know what? I’m paid here to take out the trash, not to intervene in people’s lives based on what I find.’ As a pastor, all I could do was say a prayer,” he says.

And to do the trash, Marboe concluded, “it’s sort of a reminder that every small thing that we ever do for other people is valuable, even if it might be really small and unnoticed.”