Biblical travel: How far to where, and what about the donkey? 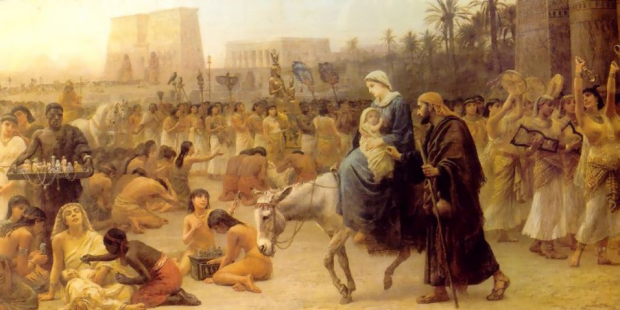 All the Gospels portray ancient travel as undemanding, but no one was teleporting, that’s for sure

“At that time Mary got ready and hurried to a town in the hill country of Judea, where she entered Zechariah’s home and greeted Elizabeth.” (Luke 1:39-40)

St. Luke makes it sound like Mary slipped out the front door, opened the gate, turned right, took a walk beside a park for a block or two and showed up on her cousin Elizabeth’s doorstep; nothing more than a stroll. All the Gospels portray ancient travel as undemanding. One begins here and ends there, as easy as teleporting off The Enterprise.

But it was a 90-mile walk to the village of Ein Karem, John the Baptist’s traditional birth place, and only five miles to Jerusalem from the southwest.

Mary traveled alone, Luke implies (though likely in caravan), and she was newly pregnant (think morning sickness). What St. Luke calls “hill country,” other references call “the Judean mountains.” It wasn’t a walk in the park. She stayed about three months with her cousin and then, one might guess, walked back for a chat with Joseph.

Distance from Nazareth to Bethlehem: 80 miles.

Going “up” to Bethlehem is an important clue about the terrain, meaning more Judean mountains. The range encompasses both Bethlehem and Jerusalem.

Galilee is north of Jerusalem; Bethlehem is to the south. The shortest route, 70 miles more or less as the crow flies, is through Samaria. Given the antipathy between Jews and Samaritans, Joseph and Mary likely skirted the area and went around the longer way.

Assuming an average pace of 2.5 mph, 20 miles a day, would mean a trip of four 8-hour days. Some speculation puts it at seven days, or ten. I think four days is about right. Mary in her late teens, strong, healthy peasant stock; even pregnant and near delivery she could have managed walking it.

That is if they didn’t bother with a donkey. With a donkey, no question, it was a seven- to ten-day trip. Yes, all the images depict Mary seated on a donkey. I suggest they are wrong.

I’ve hiked with pack burros; it is slower. A donkey will pretty much set its own pace and not usually the one you would like. You may be in front tugging a lead, but the donkey is in charge. You get to walk ahead and pretend you’re in command.

And I’ve ridden them. When donkey decides it’s had enough nonsense from you, it will simply stop, and there’s an end to everything until it decides otherwise. A donkey would have delayed them.

Even if they did have a donkey, I bet she walked. Donkeys aren’t fit for riding (again, yes, there are people who enjoy it over short distances; I’m not one of them at any distance). Eighty miles riding a donkey, picturesque as might be, still works out to, oh, let’s see, yes, 80 miles riding a donkey. Sensible people that they were, they walked.

Distance from Bethany to Jerusalem: 2 miles.

“Jesus entered Jerusalem and went to the temple. He looked around at everything, but since it was already late, he went out to Bethany with the Twelve.” (Mark 11:11)

Bethany, east of Jerusalem, became Jesus’ staging area for his Palm Sunday entry into Jerusalem during the week we call Holy. It was also his nightly retreat from Jerusalem. It was the home of Mary, Martha, and Lazarus. It was at the Bethany home of Simon the Leper that, in his last week, Jesus received anointing by a woman. “She did it,” Jesus said, “to prepare me for burial.”

Two miles was the distance between safety and danger. He was relatively safe during the day, teaching in the temple. The temple hierarchy was reluctant to arrest him “for fear of the crowds”; they would not strike in the day. So he slipped out of the city each evening back to Bethany’s relative shelter, and back into Jerusalem the next morning.

He taught and answered the questions of Sadducee, Pharisee, and Scribe alike until finally, he had enough and made no further replies. His responses only stiffened the resolve of the temple authorities to execute him.

On the night of Passover he stayed in Jerusalem with his disciples. On the one night he remained in Jerusalem, two miles from Bethany, he was arrested while praying in Gethsemane’s garden.