St. Francis de Sales and making the most of the “mixed bouquet” of Catholic media 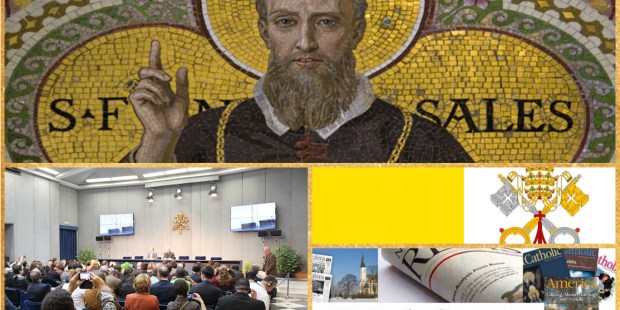 On the feast of journalism’s patron saint, some reminders for consumers of Catholic news and multi-media

St. Francis de Sales is the patron of writers, editors, and journalists, and on his feast day, we do well to consider how we readers can best benefit from the great mixed blessing of Catholic media. In the preface to his best known and perennially popular work, Introduction to the Devout Life, Francis sets out a description of Catholic writing that emphasizes the unity in diversity that marks all things Catholic:

The flower-girl Glycera was so skilled in varying the arrangement and combination of her flowers, that out of the same kinds she produced a great variety of bouquets; so that the painter Pausias, who sought to rival the diversity of her art, was brought to a standstill, for he could not vary his painting so endlessly as Glycera varied her bouquets. Even so the Holy Spirit of God disposes and arranges the devout teaching which He imparts through the lips and pen of his servants with such endless variety, that, although the doctrine is ever one and the same, their treatment of it is different, according to the varying minds whence that treatment flows. … I offer you the same flowers, dear reader, but the bouquet will be somewhat different than [others’], because it is differently made up.

How should we dear readers best receive and respond to the various bouquets with which Catholic journalism presents us? Here are some suggestions:

Recognize what Catholic journalism is not. Catholic journalists – and this term includes those who write for print and online newspapers and magazines, bloggers, social media publishers, podcasters, and broadcasters – may report on, explain, or discuss Church teaching, but journalists do not partake in the ordinary magisterium of the Church. Journalists may be trained and educated theologians and apologists, they may be ordained men or members of religious orders, but when they communicate as journalists (as a bishop tweeting, for example, and not issuing a pastoral letter) they do not “speak for the Church” any more authoritatively than any Catholic.

In other words, don’t read Catholic journalism as though it were, or should be, the Catechism.

Remember that Catholic journalism reflects the full range of our catholicity. As Americans are finally beginning to realize about the secular media, no journalism is perfectly objective and neutral. Catholic journalists and publications, websites and blogs represent many different experiences of Catholicism – such a wide range that we must resist using binary and polarizing words like conservative and liberal or orthodox and progressive. These differences naturally color what we read. When a position or point-of-view is acknowledged, we should take it with a grain of salt. When it is unacknowledged or goes unchallenged, it becomes troubling bias. We readers have the responsibility to know something about the territory – that the bouquets will be differently arranged at the National Catholic Register and the National Catholic Reporter. Reading one and reacting as though it is or should be the other is a waste of our reading time – and using the combox to chastise one for not being the other is an even bigger waste of time. A quick prayer would be more productive.

Break the bubble. What is not a waste of time – and is indeed good and proper for our spiritual health – is to read across the full spectrum of Catholic journalism. People who live in bubbles never learn anything. They are the hard ground upon which seed may fall but never take root. If we believe we already have all the answers and are enraged or threatened by other points-of-view, we should not read at all. But that would be a terrible loss.

Read with clarity, and with charity too. With online journalism especially, don’t stop at a headline because your knee is jerking in reaction to what you think you’re about to read. Headlines and teasers are designed to grab our attention and thus has journalism, Catholic or otherwise, worked since Gutenberg. Be willing to read a piece fully, and with the charitable assumption that the writer or publisher has not set out to offend us or to destroy the Church. If we take issue with something in a piece, let’s comment with a question or consideration, not a threat of excommunication. We might imagine ourselves sitting over coffee or a beer with a friend who thinks differently.

Remember who we are. We are readers. We are not editors or publishers or diocesan censors. We are not spies for the Spanish Inquisition, seeking out hints of hidden heresy or apostasy in human interest stories about some person who did something grace-filled but may have only 6 degrees of separation from somebody who once sinned. It’s not our job to judge – or even to discern the state of – souls. And most importantly, remember that as readers we have the power to decide something isn’t for us and just move on.

Because the world is broken, most of these suggestions have concentrated on things we shouldn’t do. But here, in honor of St Francis de Sales and his passionate belief in the transforming and grace-filled power of the press, is a reminder of what to do:

Thank Catholic journalists for doing their difficult and necessary job to the best of their ability, even when it seems like an extended Purgatorial sentence. Reward good, powerful Catholic journalism (even when it’s something that doesn’t make us happy) by commenting positively and sharing widely. And pray, daily, for the intercession and blessing of St Francis de Sales on all the bouquet makers that help our faith to flower.