How the progressive movement that inspired me lost me on abortion 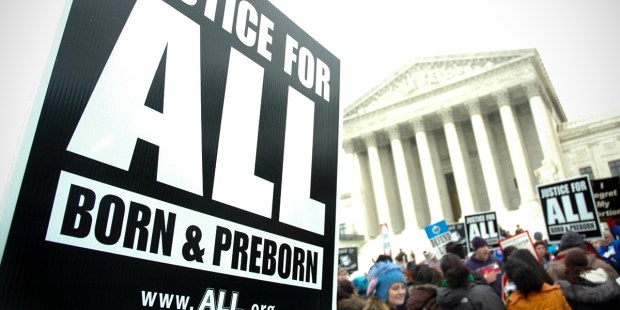 You always speak for the poor and vulnerable. You don’t compromise on their interests. That’s what I had been taught.

The decision didn’t affect me. I was only 15, and in those sexually more innocent days not in a position that might make it relevant. As my dad and I drove along a country road on a beautiful winter day, the radio news announced that the Supreme Court had overturned all the state laws against abortion. I don’t think I’d given the subject two thoughts before that, but for some reason I remember hearing the news on the radio.

Nearly everyone in my New England college town was leftish or leftist, at least in the academic circles that dominated the public square. (Literally dominated the public square, since we had a town common.) The university was famous for its Marxist departments, and the used booksellers (a glorious five or six of them) had Marxist and socialist sections the way they had fiction and automotive sections. The countryside around us was dotted with feminist communes, some of the sort that didn’t even allow male dogs or cats. You could find an office somewhere in town for almost any activist group you could think of.

Even so, abortion wasn’t a live question in the town, at least as I remember it, and certainly not the kind of live question the Viet Nam war was. Everyone had to take a position on the war. You were marked and judged and sorted by your support or opposition. But that wasn’t true for abortion, not till some time after Roe.

But not legal abortion

The war I had opposed, just as I had gone with friends to hand out McGovern flyers before the 1972 election. I read Michael Harrington’s books, starting with his classic The Other America, and then pushed my way through his fat book Socialism. That was my movement. And after Roe, it began shifting to include support for legal abortion.

Presumably by the grace of the God I only partly believed in, I couldn’t shift with it. Legal abortion, I couldn’t see. Even with just freshman-year biology and a slapdash exposure to philosophy, I saw that the embryo and fetus had to be human. That “clump of cells” language was just stupid. Since the embryo was human, you couldn’t kill him. This followed as night follows day, or as “=4” follows “2+2.”

In this, I was only following the logic and the commitments I had been trained in. You always speak for the poor and vulnerable. You don’t compromise on their interests. That’s what I had been taught.

Four years later, a Christian friend in college said that Christians had no right to impose their views on anyone else. We were sitting around someone’s room, having the kinds of arguments 19-year-olds have in dorm rooms late at night. By then, I had made a conscious commitment to Christianity, which had only strengthened my objection to abortion.

I still remember the moment I realized I was the only one in that room who thought the unborn child deserved protection. All the guys were some kind of Evangelical, yet no one else believed the destruction of the unborn child even problematic. A few years later, when I became an Episcopalian and went to a parish that considered itself conservative, I found that speaking of abortion in any but the most relativist language would get you called a fundamentalist and left off the guest list for parties.

Now run of the mill

Only some years later did I finally discover many Christians who saw abortion as a wrong and saw the unborn child as a human being with the right not to be killed. The first was a small group of pro-life Episcopalians led by a single minister, because none of his peers agreed enough to stand up. (About 10 years ago he entered the Church and has been ordained a priest.)

I looked a little longingly at pro-life Catholics who had the support of their Church. The Catholic Church’s witness, and the mind behind it, pulled me towards her. It was a hint or a clue. If she was right about this, when so few others were, she might be right about a lot else.

When we finally entered the Church, I found that now I was no more special for believing in the right to life than I was for liking ice cream. I can’t say what a relief and blessing that was. Sixteen years later, the prayers for the unborn at Mass and the Knights outside church collecting for a pregnancy center still make me smile.

My politics evolved over the decades since I heard that news story on the radio, though as the twig is bent, etc. Our world would be so much better if the people I knew as a youth had held consistently to their commitment to the poor and vulnerable. But they taught me something I have not forgotten, even if I applied it to people they didn’t.

David has lately written two other articles on abortion, The Left’s Failure: Why Nat Hentoff Lost His Friends, and Pro-Lifers Care About the Born, More Than Liberals Know. He also contributed to the Human Life Review’s symposium, Pro-Life in the Age of Trump.