Pope Francis: The courage of one valiant woman can bring hope to an entire people 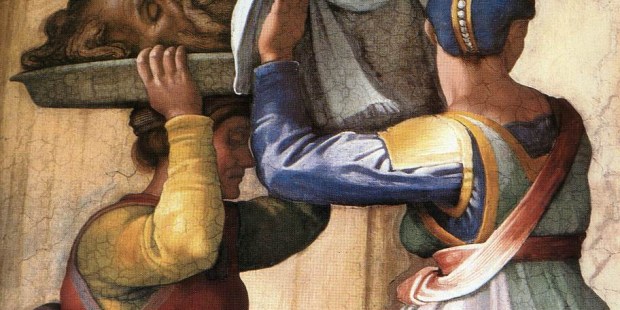 In his latest catechesis, Pope Francis reflects on the Old Testament heroine Judith, and the power of trusting in God unconditionally

VATICAN CITY — The faith and courage of one valiant woman can bring hope to an entire people, Pope Francis said this morning, as he turned to the story of Judith in his continuing catechesis on Christian hope.

Addressing pilgrims at the today’s general audience, in the Paul VI Hall, the pope recalled how the Old Testament Book of Judith recounts the siege of the city of Bethulia by the Assyrian general Holofernes, which left the people on the verge of surrendering.

In an apparently hopeless situation, the leaders of the city determined to hold off for five days, trusting that the Lord would come to their aid.

At that point, Judith appeared to reinforce their wavering hope in the face of fear, and to propose a plan that led to victory over the enemy.

Judith was “a widow, a woman of great beauty and wisdom,” who spoke to the people “with the language of faith,” the pope said.

“Courageously, she reproaches the people, saying: ‘You are putting the Lord Almighty to the test … No, my brethren, do not provoke the Lord our God to anger. For if he does not choose to help us within these five days, he has power to protect us within any time he pleases, or even to destroy us in the presence of our enemies. […] Therefore, while we wait for his deliverance, let us call upon him to help us, and he will hear our voice, if it pleases him.’ (Judith 8:13,14-15,17).”

This is the language of hope, the pope said. “Let us knock on the doors of God’s heart; He is a Father, and He can save us.”

Pope Francis continued: “This woman, a widow, also risked making a bad impression in front of others! But she was courageous! She went ahead!” In unscripted remarks, he then told the crowd: “This is my own opinion: women are more courageous than men.”

Extolling Judith’s virtue, he went on: “With the strength of a prophet, Judith reprimands the men of her people to bring them back to trust in God; with the gaze of a prophet, she sees beyond the narrow horizon which the leaders propose, and which fear limits even more.”

“God will certainly act, she says, while the proposal of the five days of waiting is a way of tempting him and escaping his will. The Lord is the God of salvation, and she believes this, whatever form it takes. It is salvation to liberate them from their enemies and have them live, but in his unsearchable plans, it can also be salvation to be handed over to death. As a woman of faith, she knows this.” But, he added, “we know how the story ends: God saves.”

“Dear brothers and sisters,” the Holy Father said, “let us not place conditions on God, and instead let us allow hope to conquer our fears. Trusting in God means entering into his plans without demanding anything, even accepting that his salvation and his help might come to us in ways other than those we expected.”

“We ask the Lord for life, health, love, and happiness; and it is right to do so, but in the knowledge that God is able to draw life even from death, that one can experience peace also in sickness, that there can be serenity even in loneliness and blessedness even in tears,” he explained. “We are not the ones to teach God what he must do, and what we need. He knows better than we do, and we must trust him, because his ways and his thoughts are different than ours.”

“The path that Judith points out to us is one of trust, waiting in peace, prayer, and obedience. It is the path of hope,” the pope told the crowd.

We must do “everything in our power, but always walking in the footsteps of the Lord’s will,” he said. For we know that Judith “prayed much, talked much to the people and then courageously took leave, looked for a way to approach the leader of the army, and succeeded in cutting off his head, slitting his throat. She was courageous in faith and deed. And she always sought the Lord!”

The Fathers of the Church saw in the Old Testament figure of Holofernes a type of Satan. Thus, St. Jerome, in his Letter to Eustochium, would say that “as soon as the Son of God set foot on earth” in the Incarnation of Jesus Christ, “then chaste Judith once more cut off the head of Holofernes.”

Judith had her own plan, carried it out successfully, and brought the people to victory, Pope Francis noted, but always in the attitude of faith, of one who accepts everything from the hand of God, sure of his goodness.”

“Thus, a woman full of faith and courage gives new strength to her people who are in mortal danger, and she leads them on the way of hope, pointing it out also to us,” he said.

In conclusion, Pope Francis invited all those present to recall the many times “we have heard wise and courageous words, from humble people, from humble women,” especially from our grandmothers.

“The words of grandmothers … How often do grandmothers know just the right word to say, a word of hope, because they have life experience, they have suffered much, and they have trusted in God.”

Ultimately, Pope Francis said, the peace that truly lasts comes when we surrender in trust to the Father’s love, when we enter into the prayer of Jesus: “Father, if you will, let this cup pass from me. But not my will, but yours be done.” (Lk 22:42).

“This is the prayer of wisdom, hope and trust,” he said.