Sara’s story: An amazing thing happened on the day of her scheduled abortion 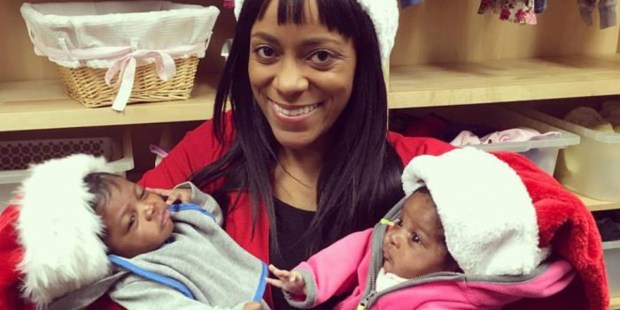 She arrived at the pregnancy center with her mind made up: she was going to abort her twins.

Working at a pregnancy center is intense.

There’s an inspiring side, sure: helping an overwhelmed young woman with some maternity clothes and broader support is very rewarding.

But when a client is considering an abortion … well, it’s hard to describe everything you experience in meeting with her.

Often when the woman walks out the door after a counseling session, you’re not sure if you’ve been able to influence her positively. And often you never know. Many times, the counselors don’t find out if a woman kept her baby, chose adoptive parents, or ended the baby’s life through abortion.

Christina Marie Bennett works with ABC Women’s Center in Middletown, Connecticut. As a client services manager, she often speaks to women making pregnancy decisions. Some call because they are in need of a free pregnancy test or an ultrasound. Some call about maternity clothes, car seats, parenting classes, or adoption info.

Sara (not her real name) called saying she was undecided about continuing her pregnancy, and wanted to talk about her options. She was considering abortion. Christina asked her to come in, explaining that all services would be completely free. She would have fetal models ready to show her, and research ready to share. Christina expected to point out to Sara that she didn’t have to decide right then. The crucial step was deciding not to abort immediately, and the pregnancy center could help guide her through other decisions as the pregnancy continued.

But by the time Sara arrived, she had already made a decision. She shared that between the phone call and coming into the pregnancy center, she had gone for an ultrasound, and learned she was carrying twins. She was overwhelmed, as she already had children at home and felt she couldn’t possibly handle another child, much less two. The babies’ father had recently broken up with her and she had no significant family support. She’d scheduled an abortion.

But the morning of her appointment, Sara said she “felt an emotional weight upon her shoulders,” recounted Christina. “She felt sick on the inside as she thought about her abortion. The intense feelings were a sign to her that she couldn’t abort her twins. In the quiet of her home, she made a decision to cancel her scheduled abortion. Sara told me as soon as she decided to cancel her abortion, a sense of relief washed over her. In an instant, all of the emotional weight was lifted off her and she felt free.”

The staff and volunteers at the pregnancy center walked with Sara through her pregnancy. They directed her to resources she wouldn’t otherwise have known about and supported her with prayer. She was given maternity clothes, a brand new crib and and a beautiful baby shower.

Sara joined the parenting program, and will receive baby clothes and diapers until her twins are two years old. She told Christina, “I don’t know if I would have been strong enough to go through this without you guys at ABC.”

“A few weeks ago Sara came into our center to pick up some Christmas gifts for her children,” Christina recalled. “She brought along her precious twins, a boy and a girl. It was my first time seeing them and I was overjoyed. As I held her little girl I began to weep. I thought back to the first time I met Sara. The tears begin to fall as I remembered all the struggles she endured to choose life for her babies.”

Sara says her beautiful, healthy twins are now the light in her life. They bring her joy, and she is deeply grateful to have them. She was anxious and alone, but in the midst of her fear, she reached out for help and chose to parent her children. Fortunately, help was there for Sara to find.