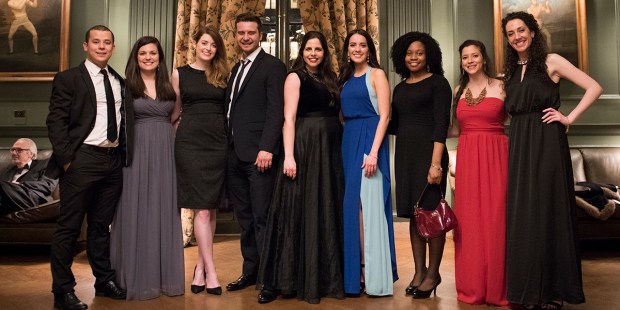 “For a lot of young people, their views will actually line up more with the pro-life view, though they actually won’t call themselves pro-life.”

Treasa Dalton got involved when she came to New York, concerned about the increasing pressure in her native Ireland to permit abortion.

Anna Fata signed on when she discovered there was such a need to influence the culture in New York, where it seemed so less pro-life than it was back home in Texas.

Michael Israel, whose family is Jewish, agreed to serve after considering similarities between the legalization of abortion and the history of the Jews under Nazi rule.

The reasons for getting involved in a new group called Pro-Life Future are as numerous as the growing diversity of America’s millennial population. While the pro-life movement has been depicted, to varying degrees of accuracy, as white, middle-aged, Catholic or evangelical, and Republican, Pro-Life Future refuses to be pigeon-holed into any category.

Except one: it’s specifically for people in their 20s.

“Our goal is to get people plugged into the existing pro-life community and build a greater culture of life among young adults,” said Anna Fata, president of the New York chapter of Pro-Life Future. “My generation, … we’re the ones the reproductive health and rights [advocates] are targeting…. People who are lobbying for abortion are saying: ‘When you’re in your 20s you need to get your career started. You can’t have a baby. These rights are for you in order to have the life you want.’ We want our generation to stand up and say, ‘No, that actually isn’t what we want.’ But also to be there to help show our other friends who might be indoctrinated, who are immersed in that culture. … So our mission is to be that voice, to show that there are young adults who are normal people and also happen to be prolife.”

The goal, said Brendan O’Morchoe, Pro-Life Future’s national director, is to “bridge the gap” between college students and “the next stage of the pro-life movement, because there really isn’t anyone else who is really talking to this demographic.” O’Morchoe said that in many metropolitan areas like New York, the median age of women seeking abortion is in the mid- to late-20s. “There’s no other group who’s really able to talk to, communicate with and support those women who are seeking an abortion in that age group.”

Since Students for Life of America started Pro-Life Future in 2015, O’Morchoe has overseen the opening of 16 chapters around the country. He predicts that another 10 will open by mid-year.

The New York chapter was launched in November 2015. They socialize together, pray regularly outside abortion clinics, help coordinate the 40 Days for Life campaign in Manhattan, bring in speakers for training events, and partner with local pregnancy centers and pro-life organizations.

Abortion rates in New York are significantly higher than elsewhere in the country, so there is much work to be done. “What we’re finding is those cities that are most challenging is where we thrive the most because we know what we’re up against; we know what that culture is, so there’s no opportunity to not do anything,” O’Morchoe said.

But it’s also a way to provide mutual support for those in the fight. Fata, who is from Houston, acknowledged that in Texas, “the need didn’t feel as apparent. … It was easy to find other pro-life people, and it didn’t seem like as big of an issue there as it is in New York.”

In the Big Apple, on the other hand, “it can be very isolating when you’re in your workplace and everyone is pro-choice, which seems to be the norm,” she said. “Maybe in New York it is, but around the country it isn’t. But our voices just seem to get drowned.”

“For a lot of young people,” he said, “their views will actually line up more with the pro-life view, though they actually won’t call themselves pro-life.”

Israel’s background is a prime example of that demographic’s diversity. Reared in Reform Judaism, he now subscribes to Theosophia, a religion that believes in reincarnation. That itself is one reason he is actively pro-life: souls, according to his faith, need to be reborn and have a chance to perfect themselves. Abortion frustrates that plan.

But he points out that religion in the movement takes a back seat to the facts of life, which he calls “secular.”

“A child’s life starts at conception. I don’t really think you can argue about that,” Israel stated.

He pointed out that the San Francisco chapter of PLF consists largely of secular millennials and is headed by an atheist.

“My family is Jewish, and [abortion’s] connection to eugenics definitely spooked me,” Israel continued. “Hitler wasn’t really concerned about the Jewish religion but with the race. He thought that the race was inferior, and if you got rid of that race the world would be a better place. And that’s what kind of scares the hell out of me, that somebody can define what is life and what is value and therefore what is not life and what is not value.”

Dalton, the Irish vice president of the New York chapter, said that a family tragedy in 2012 was a turning point for her. A close relative went into labor three months too soon, and her baby didn’t make it.

“We were all there in the room and held the baby,” Dalton said. “I remember looking at her, a tiny but perfectly formed human, with fingernails and little eyelashes. My sister said, ‘I can’t believe that all over the world people abort children just like this.'”

Abortion wasn’t legal in Ireland, so Dalton didn’t think about it all that much.

“I looked at her, kind of horrified that this perfect human being—the fact that she wasn’t alive in my arms was a family tragedy, and there were millions of children like her who don’t have anyone to mourn for them and don’t recognize their humanity.”

Coming to New York, where she could see abortion taken for granted, spurred her into action.

It’s long been pointed out that the March for Life in Washington, DC, gets younger every year, with thousands of teens and young adults filling the streets. This year, many marchers may just want to latch onto the PLF members who will be in their midst.

“We are the pro-life generation,” Fata said. “We’re the future of America, and we really want that future to be pro-life. Even if we were to outlaw abortion there’s also a deeper issue. There’s a problem in our culture. It doesn’t really value life at all its stages. Not only does there have to be a political will, there needs to be people on the ground who are fighting to build up a culture that values the dignity of life, at every stage and every circumstance.”