From “Mean Girl” to Saint, the story of Hyacintha 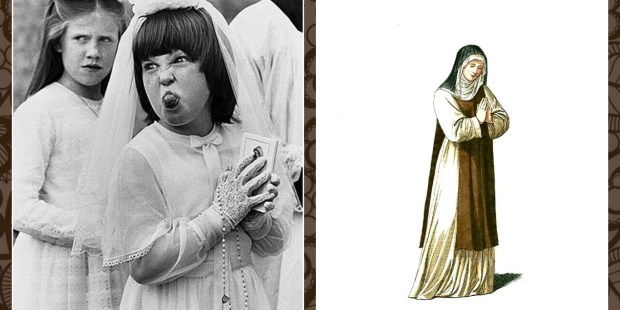 Isn’t it encouraging that even a selfish, ordinary sinner could, in the end, become so holy?

Often it seems saints come in two categories: appalling sinners converted in an instant and paragons of virtue never once tempted to sin. The more you get to know them, the more you find that both great sinners and great saints struggled and were tempted throughout their lives. It’s encouraging to see St. Mary of Egypt fighting against memories of her sinfulness even 15 years after her conversion, or to read about the struggles of the impossibly pious St. Anthony of Padua. But those of us who don’t fit in either category can sometimes be frustrated by what seems to be a dearth of ordinary sinners turned saints.

Neither murderer princess (like St. Olga of Kiev) nor angelic child (like Bl. Imelda Lambertini), Hyacintha was just a self-willed teenager. Despite being rather pious as a child, Hyacintha (1585-1640) became a Renaissance version of a Mean Girl. She believed in Christ and his Church, it being 17th-century Italy, but didn’t have much use for the faith beyond that. Her life was miraculously preserved from some near-fatal accident when she was 17, but still Hyacintha was uninterested in anything but her plans for a romantic marriage and a wealthy lifestyle of self-indulgence.

And then, for the first time it seems, her will was thwarted. The dreamy young nobleman she’d set her sights on married someone else. Worse: the someone else was Hyacintha’s younger sister. And Hyacintha, having rather a penchant for the dramatic and a very petulant approach to life, was not about to let that slide. She sulked and raged and generally made life so miserable for her poor family that they packed her up and sent her off to a Franciscan convent. She escaped once, but was escorted back under guard, there to live out her days in sullen despair—or so she thought.

Generally speaking, being forced to enter a convent because you’re too miserable to live with doesn’t end well. For some time it seemed that Hyacintha would be no exception to that rule. She declared to her father that she would live as a nun but she would not live beneath her station. A noblewoman she was and a noblewoman she would remain, and vow of poverty be hanged.

For some 15 years, Hyacintha did just that. She wore habits of the finest materials, had delicacies brought in to supplement the simple meals provided, and spent her days entertaining guests in her private rooms. Though she submitted to the life of prayer required by the community and to the vow of chastity, her vows of poverty and obedience were meaningless. Scandal or no scandal, Hyacintha would live as she wanted.

In bed with a minor illness some years after her entrance, Hyacintha received a visit from her confessor who was so shocked at the luxury of her rooms that he declared the only reason she was in the convent was to help the devil. Hyacintha was stunned by his words and resolved to amend her life.

And then she didn’t.

It’s no great surprise, this. The longer you’re ruled by self-will, the harder it is to repent and submit. Fortunately for Hyacintha (and for all of us) God is patient and merciful. Again Hyacintha fell ill, this time a much more serious illness, and finally she repented, realizing just how her vanity and willfulness had hurt Christ. She made a public confession of her sins before the community and resolved to live according to the rule set out for her.

That she did, and more besides. From that point on, Hyacintha lived a life of extreme penance. She gave generously to the poor, excelled in contemplative prayer, and became so united to Christ that he gave her the ability to read souls and to work miracles. Having been so frivolous and indulgent in the past, Hyacintha developed a horror of luxuries and a commitment to the poor so powerful that she gave away her own dinner when someone came knocking. Her love for the poor inspired her to found two confraternities to aid them, particularly those in prison. By the time she died, the ill-tempered, self-indulgent girl’s reputation for holiness was so strong that they had to replace her habit three times during her wake as the faithful kept cutting pieces of it off to be kept as relics. God’s abundant mercy had transformed her from a mean girl into a great saint.

I find this kind of story so encouraging, an ordinary sinner and a backslider to boot who was finally able to oust herself as the center of her life and live for Christ alone. St. Hyacintha Mariscotti (whose feast day is January 30) is a remarkable intercessor for the worldly and selfish among us (including yours truly) and a beautiful witness that God can work even in the most mediocre of hearts. Let’s pray today for those who follow Christ half-heartedly and that God will point out our own sinfulness and bring us to great holiness. St. Hyacintha Mariscotti, pray for us!