Imagine waiting for hours, in stifling heat, for the possibility of Mass and the Eucharist 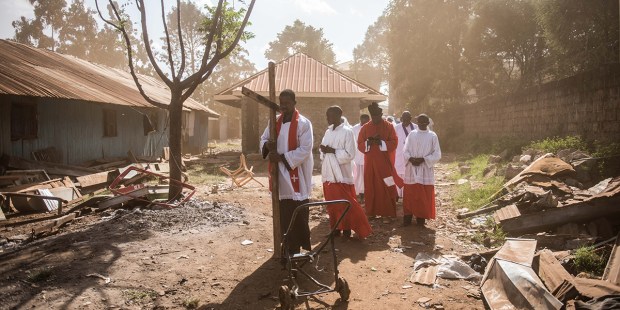 Compared to these priests, I expend very little effort bringing Jesus Christ to anyone

Recently, I found myself at my in-laws’ dining room table having dinner with two African priests, Father Augustine and Father Jean, both of whom are fluent in at least five languages and studying for Master’s degrees in prestigious Catholic programs in the United States. After just a semester in America, these two priests have a sense of the spiritual poverty we experience here, and over glasses of wine and juicy steaks, they were quick to explain the differences they observe in the U.S. compared to Africa.

“In my country,” Father Augustine said, “Christianity is still new and when people convert, they are on fire for the faith, but there are not enough priests to cover the large territories. We cannot get Christ to the many people who need him.”

He told us this story: “One day I was bringing communion to a rural area in Africa. I borrowed the rectory’s only car and after driving several hours, I came to a road that was flooded with water, with no way to cross. The people I intended to visit that day had not been to Mass in over one month. They had been without Christ in the Eucharist for over a month! I had to get to them; I could not leave them without Jesus. I couldn’t disappoint them.”

Father sat quietly in his car for a few minutes, wondering what to do. Crossing the road was physically impossible but leaving the people without the Eucharist was also impossible. On the side of the road, he noticed a man working. Father Gus got out of his car and explained the situation to the stranger. Father asked the man if he could borrow a bike he noticed that was sitting against a tree.

The worker agreed so Father went back to his car, collected his Mass kit, and strapped what he needed onto the bike. Then, using a stranger’s bike, he rode in the stifling heat for several hours more to get to the people. When he arrived, he was thirsty, soaked with sweat, and covered in thick sheets of dust.

He was also hours late for Mass.

“But the people,” he said, “just sat there in the church waiting for me. They were not angry, they were not impatient I was late. They wanted Christ in the Eucharist and they knew I would bring Him to them. They were happy to wait until I arrived.”

Father Gus and Father Jean had other stories to tell — tales of overcoming ridiculous obstacles in order to bring Jesus in the Eucharist to the spiritually hungry. After one evening with these priests, I realized that compared to them, I expend very little effort bringing Jesus Christ to anyone. I get frustrated and give up quickly when my attempts to pray with my own children are met with discord and protests. I often allow my vanity or pride to keep me from sharing my faith with others who don’t think the same way I do. I talk myself out of saying the blessing in front of people because I don’t want to make any of us uncomfortable! I don’t always clarify inaccurate statements people make about the Catholic Church and her teachings. Father Gus and Father Jean ride bikes across the African wilderness to bring people Jesus. Do my acquaintances even know I’m a Catholic?

But the most poignant questions their testimony prompted me to ask myself included: would I wait for over an hour in an empty church to receive Christ like those committed African converts? Is my entire day, week, or month focused on the moment when I can receive the Body and Blood of Jesus Christ? Is the Eucharist the focal point of all my thoughts, the summit of all my actions? How many times do I—the spoiled American I am—complain when I don’t receive the Eucharist or the sacrament of Confession in the manner I desire?

The evening I spent with Father Gus and Father Jean will stay with me for a long time. While our time together consisted mainly of stories they told about teaching Catholicism in their home country, those two holy priests also managed to bring Christ to a suburban dinner table in America and they shared Him with a group of people also in desperate need.