Viral video alerts us to the problem of elder abuse 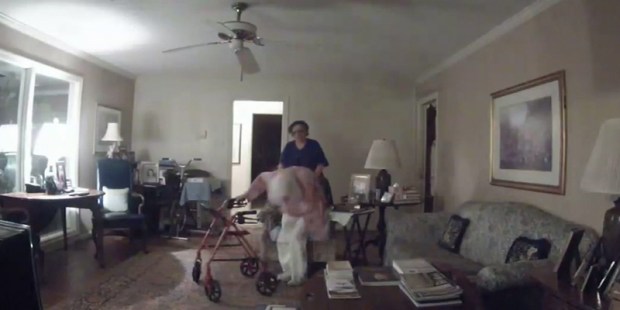 An appalling video made the rounds this week through news and social media. It was captured by an in-home surveillance camera and reveals a caregiver repeatedly striking an elderly woman; the caregiver is angry because the patient has fed “human food” to a pet.

The video depicts abuse and there’s no need to watch it. Police have already found and arrested the caregiver; if convicted she could serve between two and 20 years in prison.

The video is an example of an increasingly prevalent problem. Elder abuse is a growing issue in part because there are simply more elderly people now — people 65 and older were 14.5% of the population in 2014; they are expected to be 21.7% of the population by 2040.

The elderly are more and more a large percentage of the weak and fragile among us who need to be protected and defended — against abuse and against the growing push for euthanasia.

Reminding us of the importance of the elderly is clearly a key priority for Pope Francis.

He has urged closeness and respect for the elderly on numerous occasions, including in his most recent interview last Friday.

Here are six of his many appeals and reflections, reminding us of just how important the elderly are, first off because of their irrevocable human dignity, but also because of the tremendous service they offer to us all just by being.

“We live in a time when the elderly don’t count. … It’s unpleasant to say it, but they are set aside because they are considered a nuisance. … The elderly pass on history, doctrine, faith and they leave them to us as an inheritance. They are like a fine vintage wine; that is, they have within themselves the power to give us this noble inheritance.” Nov. 19, 2013

“[U]nless the encounter, the meeting of generations, is reestablished, unless a new and fruitful intergenerational equilibrium is restored, what results is a serious impoverishment for everyone, and the freedom which prevails in society is actually a false freedom, which almost always becomes a form of authoritarianism.” Sept. 28, 2014

“[E]ven in the most difficult of trials, the elderly who have the faith are like trees that continue to bear fruit. … In a special way, old age is a time of grace, in which the Lord renews his call to us: he calls us to safeguard and transmit the faith, he calls us to pray, especially to intercede; he calls us to be close to those in need…. The elderly, grandparents have the ability to understand the most difficult of situations: a great ability! And when they pray for these situations, their prayer is strong; it is powerful!” Sept. 28, 2014

“[T]alk to your grandparents. Because if you want to be hope for the future, you have to receive the torch from your grandfather and your grandmother. … If your grandparents are already in heaven, will you talk with the elderly? Are you going to ask them questions? Ask them. They are the wisdom of a people.” July 31, 2016

“It is really beautiful to find ‘grandparents’ who show on their faces, wrinkled by time, the joy that is born from having made a choice of love and for love. Many couples celebrating 50, 60 years of marriage come to Santa Marta, and also to the Wednesday Audiences, and I always embrace them and thank them for their witness, and I ask: ‘Which of you has had the most patience?’ They always say: ‘Both!’ At times, jokingly, one says: ‘I have,’ but then adds ‘No, no, it’s a joke …’

“This absence of examples, of witnesses, this lack of grandparents, of fathers able to tell their dreams, does not allow the younger generations to ‘see visions.’ And they are at a standstill. It does not allow them to make plans, since the future creates insecurity, doubt, fear. Only the witness of our parents, seeing that it has been possible to fight for something that was worthwhile, will help them to lift their gaze. How can we expect young people to take up the challenge of family, of marriage as a gift, if they continually hear us say that it is a burden? If we want ‘visions,’ let our grandparents share and tell us their dreams, so that we can have the prophecies for the future.” June 16, 2016