When it comes to books, I have…issues 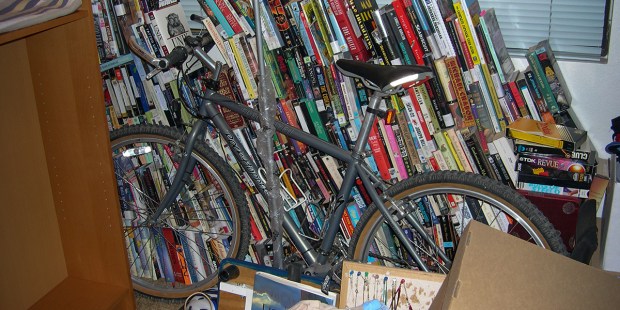 My wife didn’t realize that when she married me, she was marrying my books, too

We are remodeling our basement, and creating the library of my dreams: heated hardwood floors; custom walnut bookshelves; French doors illuminated by God’s natural light and life. Ah, yes. The bliss to come.

But first, comes the cleaning.

Those who me, or have read my blog “A Catholic Thinker,” follow my Twitter feed (@thinkercatholic) or Instagram account (catholicthinker) are fully aware of my affliction. Pictures of overstocked shelves straining under the weight of innumerable books litter my social media accounts. This is done ostensibly to share a nerdy enthusiasm, but let’s be honest…it is more like a cry for help.

Because when it comes to books, I have…issues.

“You know,” my wife carefully reminded me, “when these new bookshelves are filled, we’ll have to purge.”

The word hangs there like some an omen of pure awfulness.

Quietly, I fume. Are we seriously considering purging a book from 1978 on British Prime Minister Benjamin Disraeli? A two-volume history of the KGB (with special attention to Third World exploits)? That lesser-known work about Winston Churchill and Ireland? The story of Daniel Patrick Moynihan’s stint in the United Nations?

You can blame my parents for all of this. I remember my dad buying dozens of wood planks expressly to erect as many bookshelves as needed for their vast personal library. I fondly recall hour after hour spent in the basement, touching the bindings and thumbing through books as random as William Shirer’s The Rise & Fall of the Third Reich and John Steinbeck’s Cannery Row. I still remember being spooked by the cover of some gothic rag called There Would Be Castles and racing furiously up the darkening stairs to outrun the demons snapping at my heels.

Still, this was a storehouse of wonders just waiting to be explored.

My birthday money would routinely go for books purchased from B Dalton and Waldenbooks, or found at garage sales. Agatha Christie and Mad Magazine books, The Power of Positive Thinking and books on Adolf Hitler and the Nazis. I still remember the garage sale I went to in 4th grade — by myself. I approached the homeowner with a horror novel called Burnt Offerings. The woman looked at it, then looked at me and asked, “Do your parents know you are buying this?” I grunted something self-conscious and inaudible, and she took the book back. “I’m going to keep this,” she said, “and you talk to your parents.”

In medical school, while knee-deep in Pathology, Histology and Pharmacology, I bought books such as Arthur Schlesinger’s Robert Kennedy & His Times, Erskine Caldwell’s Tobacco Road and C.S. Lewis’ The Screwtape Letters. These works lined the wall in my room adjacent to a flattened mattress on the floor. At night, exhausted from endless medical reading, the books beckoned to me, begging to be read. Soon, there would be time to read and reflect. Soon…just not yet.

My wife has more than once declared that when she married me she didn’t realize she was marrying my books, too. As I pondered teaching history, she lived with Winston Churchill, Edmund Burke and George Kennan. Then Shakespeare, T.S. Eliot and Robert Frost moved in. As I became Catholic, she made room for giants like G.K. Chesterton, Flannery O’Connor and Evelyn Waugh.

There is a charming 1922 Atlantic Monthly essay penned by a pastor about his penchant for (and difficulties with) buying too many books. He is infectiously enthusiastic and delightfully conniving as he tries to sneak or smuggle recently acquired books past his vigilant wife. Newly purchased books slipped into stacks of old books or deceptively inscribed to his wife make their way into his library under his wife’s very nose. I have studied from a master.

But last week, as I surveyed the piles and piles of books I have accumulated (and loved) over many years, I realized that these books aren’t just a hoarder’s malady, or the bulky testimony to a boyish inattentiveness. They are a connection to my past — the library of my boyhood full of wonder, stories and dreams; a place obscured and distanced by my parents’ divorce and several difficult moves to different states.

Simultaneously these books are a connection to my future – a place I am trying to reach, to recline in, to escape to. They represent an oversized burning hearth in a wood-lined library, the pub of dear friends just up the craggy, heathered path, and they represent my eternally young daughters snuggled on my chest, heavy with sleep as I whisper one last fairy tale to them.

I have book issues.

Thanks be to God.