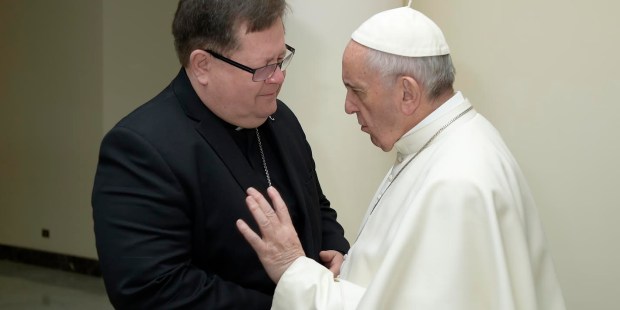 VATICAN CITY — Pope Francis has sent his condolences to the people of Canada, after six people were killed and eight wounded when gunmen opened fire at a Quebec City mosque during Sunday night prayers.

The pope met briefly this morning with the Cardinal Archbishop of Quebec, Gérald Cyprien LaCroix, after morning Mass in the chapel of his residence at Santa Marta. During the meeting, the pope assured  Cardinal LaCroix of his prayers, and stressed the importance of Christians and Muslims remaining united in prayer, the Holy See press office said.

Cardinal LaCroix, who was visiting Rome, departed for Canada immediately after the meeting.

This morning the Vatican Secretary of State, Cardinal Pietro Parolin, also sent a telegram on the pope’s behalf to the same Cardinal Archbishop of Quebec, expressing his sympathy for the families of the victims and the wounded.

The Pontifical Council for Interreligious Dialogue has also issued a statement this morning, saying in part: “This senseless act violated the sanctity of human life, and the respect due to a community in prayer and to their place of worship.”

Telegram sent by the Holy See to Cardinal Archbishop of Quebec

Having learned of the attack in Quebec City in prayer room at the Islamic Cultural Center, claiming several victims, His Holiness Pope Francis entrusts to the mercy of God the people who lost their lives and he is joined in prayer with the suffering of their loves ones. He expresses his deep sympathy for the wounded and their families, and all those who contributed to the relief efforts, asking the Lord to bring them comfort and consolation in this trial. The Holy Father once again strongly condemns this violence which causes so much suffering and, imploring God for the gift of mutual respect and peace, he invokes on the families and people affected by this tragedy, as well as all Quebecers, the gift of the divine blessings.

Cardinal Pietro Parolin
Secretary of State of His Holiness

Statement issued by the Pontifical Council for Interreligious Dialogue

The Pontifical Council for Interreligious Dialogue has learned with deep sadness and outrage of the savage attack perpetrated against Muslims gathered in prayer in Quebec City in their place of worship.

This senseless act violated the sanctity of human life, and the respect due to a community in prayer and to their place of worship.

The Pontifical Council for Interreligious Dialogue strongly condemns this act of unprecedented violence and wishes to express its full solidarity with the Muslims of Canada, assuring its fervent prayers for the victims and their families.