Travels, Tweets, and Trump: Chris Arnade chronicles the heartache in the heartlands 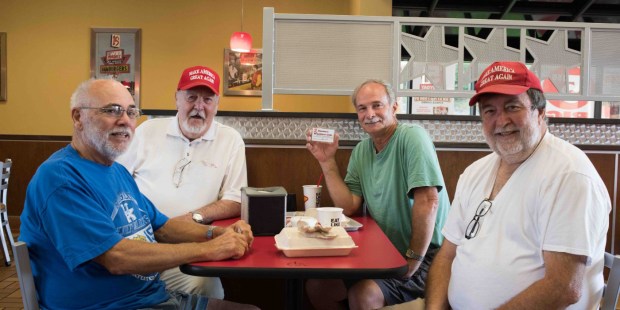 Wall Street trader-turned-photojournalist points his lens at America, and finds real insights into our society, and himself

How many oil changes would you have to get for your car in 100,000 miles? If you followed the standard of changing it every 3,000 miles, it would be 33 oil changes. But who would keep track? It would take the average driver almost nine years to put that mileage on a car.

Arnade, 51, (@Chris_Arnade) has spent a lot of time on the road over the past few years, exploring the paradoxes of modern American life. He himself is a man of many paradoxes: a former Wall Street trader obsessed with poverty, a PhD in math intrigued by why people shoot heroin, a one-time atheist-now agnostic who makes a point of being in church on Sunday—any church.

His work is gaining prominence at a time when America is trying to figure out who it is they elected as their 45th president, and who they are, too. Arnade is trying to help answer that question:

I went to Cleveland, where the GOP nominated Donald Trump, and I saw a working-class white neighborhood, Parma, Ohio, embracing Trump—and a poor black neighborhood, Central, outraged at Trump.

I also saw two neighborhoods which, despite their racial difference, share a sense of frustration at being left behind.

Though Arnade’s a self-proclaimed and proud progressive, conservative columnist Peggy Noonan wrote an admiring article about him last month in The Wall Street Journal. His story of breaking out of the impersonal world of numbers in order to meet the people affected by all the calculations of the financial world has garnered him attention in Business Insider. And the Catholic journal America has recognized this one-time Catholic as someone having his finger on the country’s pulse.

Ironically, Arnade, who pointedly mentions that he disagrees with President Trump “on almost everything, politically” finds the essentially level playing field of Twitter — the First Tweeter’s favorite late-night hangout — to be a great platform for the dissemination of his work and findings.

Surely, his stark portraits of life’s most rejected, down-and-out, or those who are striving heroically, are attention grabbing, but what perhaps intrigues all these disparate media outlets is a question that may be bugging even the most thoughtful of American observers these days. In the words of the late political scientist Samuel P. Huntington, Who Are We? What has this 240-year-old republic become, and where is she headed?

“We are a divided country, split along race and class,” Arnade wrote last October, as the contentious presidential race entered its final month. “We are also divided by education. Front row kids, many with post graduate degrees, versus the rest.”

The metaphor comes, perhaps, from Arnade’s growing up as the son of an academic, the historian Charles W. Arnade.

The front row kids and minorities overwhelmingly support Hillary Clinton. A large percentage of everyone else supports Trump. The front row kids can’t understand why anyone would support Trump, often saying anyone who does is just dumb. …

The front row kids (who live in big cities and university towns) primarily find meaning through their careers, and hence through their education. It defines who they are. Their community, and their neighborhoods, are global. They moved towns often for their careers.

The back row primarily finds meaning through their local community, and its institutions like church and sports. They live in places they have long lived in, and their families have lived in. They didn’t leave for education, didn’t leave for jobs. …

The front row kids have won. Won really big. They now control the economic, social, political, and cultural agenda. They set the rules for everyone and have made some big changes.

Although the front row kids have gotten society to change in some positive ways, in Arnade’s view, they’re also responsible for changes that have harmed the back row kids: “They have pushed through policies that have destroyed local communities, which is the primary source of value to the back row. Those policies, like NAFTA, work for the front row based on their concept of meaning. It has made many very rich.”

For the back row kids it has destroyed a lot of their communities. Hollowed them out of jobs and institutions. Replaced local stores with global ones. Redefined the nature of their work. Entirely changed their lives without a clear benefit.

The resulting humiliation, he contends, is one reason—among many, of course—for the increase use of illicit drugs.

Arnade has made a point of getting close to drug abusers since he retired from a 20-year stint on Wall Street. He took the uptown subway to the South Bronx to document the life of a contemplative Dominican monastery. Outside the cloister gate were many of those whom Jesus once said would enter the Kingdom of God ahead of the self-righteous. Arnade got to know some of them, and ended up writing an article titled, The People Who Challenged My Atheism the Most Were Drug Addicts and Prostitutes. Arnade questioned his own atheism—sort of a twist on how some people question their childhood faith and find out that they are unbelievers.

“I no longer count myself as an atheist,” he said in a recent interview. “I haven’t rejoined a church, but I’m a big believer in the value of faith. When I’m on the road I do my best to try to highlight the role of faith in helping people at every level. I think that it’s changed me quite a bit. If you had talked to me 10 years ago I think I was somebody who very much looked down on faith and people’s faith as an outdated way of dealing with things or irrational. I take almost the opposite view of that now. I feel that faith plays a huge role, a positive role, in helping people find meaning in the universe.”

He added that if he were to rejoin a church, since he had been reared Catholic, “there’s a lot of historical appeal for me in that direction.”

The time spent in the South Bronx led to a larger project to look at poverty and addiction across America, “and that meant driving in my car to places and spending time with the working class and low income people,” he said.

“What I am hoping to do, by allowing my subjects to share their dreams and burdens with the viewer and by photographing them with respect, is to show that everyone, regardless of their station in life, is as valid as anyone else,” Arnade said.

It’s a vital lesson for everyone in society to learn, he maintains: based on his travels throughout America, Arnade theorizes that Trump won the election because a significant part of the electorate felt invalidated.

Trump voters “want respect because they haven’t just lost economically, but also socially,” he wrote. When they turn on the TV, they see their way of life being mocked and themselves made fun of as nothing but uneducated white trash. … With Trump, they are finding someone who gives them respect. He talks their language, addresses their concerns.”

And so, Arnade drives on, continuing to explore the American landscape and, perhaps, helping her navigate in the years ahead.