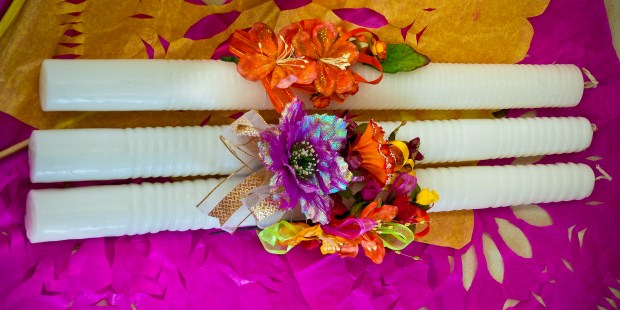 Today we celebrate the feast of the Presentation of the Lord, also known as Candlemas

On February 2, the Church in the west celebrates the feast of the Presentation of the Lord, also known as Candlemas. It is the day candles are incensed and blessed with holy water and later distributed to clergy and laity — a custom going back to the 11th century. Newly blessed candles from Candlemas will be used tomorrow for the Blessing of the Throats on the feast of St. Blaise.

The light from blessed candles represents Jesus Christ, the Light of the World — “a light for revelation to the Gentiles and the glory of thy people, Israel,” as Simeon prayed when he took Jesus in his arms in the temple.

In Mexico’s Tehuantepec Isthmus region, Juchitan de Zaragoza, La Candelaria (Candlemas) is dedicated to the Blessed Virgin in a tradition dating from Saint John of God in Spain at the beginning of the 12th century. It is celebrated with many very colorful festivities, dancing. and the release of bulls in the city streets.

In Tlacotalpan, Veracruz, people run from a bull during the annual Candlemas celebrations. A bull is let loose to rampage through the streets for hours as crowds run with them as part of the fun!

The Dominican Friars of St. Joseph Province are a community called to preach Jesus Christ as part of the worldwide mission of the Order of Preachers. They gather in the great hallway for a special celebration of Candlemas.

One of the big practices in Mexico is to dress up dolls representing Baby Jesus and present them at the local church as a reenactment of the Presentation at the Temple.

French singer Juliette Greco, who played a nun in the movie When You Read This Letter, makes crepes at Candlemas with Philippe Lemaire, in February 1953 at the the cloister of St. Severin.

In France, La Chandeleur (Candlemas) crepes are traditionally eaten to”celebrate renewal, family life, and hopes for good fortune and happiness in the future,” according to Catholicculture. org.

“Now Thou dost dismiss Thy servant, O Lord,
according to Thy word in peace;
Because my eyes have seen Thy salvation,
Which Thou hast prepared before the face of all peoples:
A light to the revelation of the Gentiles, and the glory of Thy people Israel.”