In awe of those mad-cap “Holy Fools” for Christ 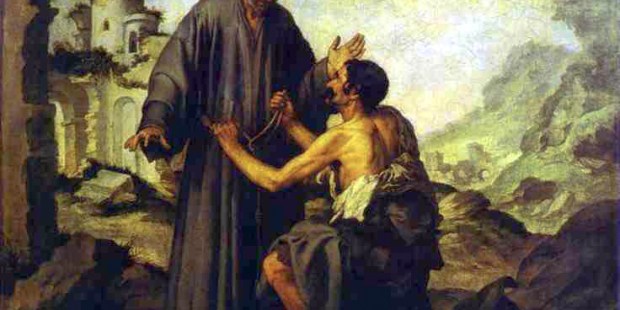 What they all seem to have in common is a total disregard for protecting their own dignity — and they were all deeply holy.

As the story goes, Brother Juniper came back naked to the monastery so often, having yet again given to beggars the clothes off his back, that his superiors finally sternly forbade him, under holy obedience, to give his clothes away again. (I suspect they prefaced the lecture with, “I can’t believe we even have to say this!”) Juniper listened and nodded solemnly, but the very next day, he ran into a poor man, shivering in his rags. “My friend,” he said, “I am not able to give you my cloak. But,” he grinned, and dropped his voice to a conspiratorial whisper, “if you were to take it from me, I certainly wouldn’t stop you!”

Blessed Juniper, patron saint of loopholes. I named my firstborn son after him, in admiration of his good humor and love of the poor. And I’ve always been fascinated by the charism of the Fool for Christ.

These Holy Fools are a strange bunch. They get their title from St. Paul: “The foolishness of God is wiser than human wisdom” (1 Corinthians 1:25). Besides Brother Juniper, there’s St. Philip Neri, who showed up at an important party with exactly half his beard shaven, and St. Francis himself, who sang in the streets and preached to the birds. In Eastern Catholicism, there are even more. There’s St Xenia of Petersburg, who was voluntarily homeless for 45 years, and wore only her late husband’s military uniform; St. Basil, Wonderworker of Moscow, who wore nothing but chains; and St. Simeon Salus, patron saint of Holy Fools, who was known for his miraculous healings, but often pretended to be mentally ill, and once turned out the lights and threw nuts at the people in church.

What they all seem to have in common is a total disregard for protecting their own dignity. They let themselves be misunderstood, mocked, and thought to be fools. They didn’t desire respect and admiration from anyone, and were content with the mercy of God. Many worked miracles, and all were deeply holy.

I find these characters equally attractive and terrifying. Terrifying, because even basic humility doesn’t come naturally to me at all, let alone inviting scorn, and attractive because I know perfectly well that they have their priorities right, and I don’t. They cared about God so much more than human admiration that they completely forgot about safeguarding their own dignity. It just didn’t seem important in comparison with what they really loved.

It turns out that it isn’t easy to make your actions line up with your beliefs. Here we are, professing to believe in an eternal life after death, so great that the 90-odd years we have on earth will seem like nothing in comparison. Yet we still find ourselves much more preoccupied with our carefully crafted social media image than we do with our prayer life.

I know that God isn’t calling me to imitate the specifics of St Xenia’s life. One of my favorite things about being Catholic is the understanding that there are as many unique ways to holiness as there are unique men and women. God has a different plan for each of us, and imitating a particular saint down to the most specific details is not usually fruitful. But there’s something about the Holy Fools that we could all do with imitating.

We can imitate the Holy Fools not necessarily by doing what they did, but by trying to adopt their attitude towards life. How different would our lives look if we actually acted as though Christ is more important to us than anything? I’d probably spend less time on Facebook, and more time with my family. I’d probably pray about ten times as much. I’d probably be a lot less reluctant to let on to strangers that I’m Catholic, even when I know it’ll cause them to write me off. It’s the work of a lifetime to get to a place where I actually act as though God is at the top of my priority list. But no matter how long it takes, it’s a goal I should be working towards every day. Blessed Juniper, and all the Holy Fools, pray for us!