“Follow me”: The message in Caravaggio’s ‘The Calling of St. Matthew’ 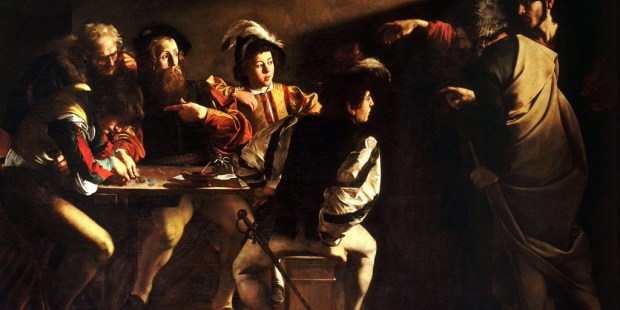 This brilliant work mingles light and darkness and captures one of the most pivotal moments in Matthew’s Gospel – the story of a sinner called by Christ.

From the doorway, his finger extended and landed on the man from across the room. You can hear the shifting of the other men in their seats. Their raised eyebrows asked, “This stranger – the Rabbi – is here for who? Levi?”

Surely there must be some mistake?

Even Peter, turning toward Jesus, seemed uncertain — befuddled. Here, Teacher? Among these men? Among these enemies of our people? These collectors of tax – thieves! – acting on behalf of themselves and the wicked occupiers of our state? Here? Though these words would never pass his pursed lips, Peter’s furrowed brow and anxious heart betrayed him. But Christ’s gaze was steady and intent. And Peter’s wordless question was answered.

It is a dirty room they find themselves in. Some even say the scene is fittingly outside the walls — on the street — where outcasts ply their trade. The company Levi keeps is the rabble of overeager boys and cynical men condemned first by their own conscience before the rest of Jewish society who feel betrayed by them. But Christ’s finger still lands on him.

Michelangelo Merisi da Caravaggio’s The Calling of St. Matthew was painted in 1600 and hangs in the Contarelli chapel of Rome’s Church of San Luigi de Francesi. It is a brilliant work mingling light and darkness and capturing one of the most pivotal moments in Matthew’s Gospel – the story of a sinner called by Christ. The Calling of St. Matthew is the living embodiment of the lost sheep, the missing coin, the prodigal son being glimpsed by his father.

The light penetrating the painting travels from right to left. It emerges from just above Jesus and yet seems a potent extension of him. The words of Christ, as of yet unspoken, are embodied in this image, “I am the light of the world. Whoever follows me will not walk in darkness, but will have the light of life.” (John 8:12) The tax collectors and their table with its coins, quills and ledgers find themselves bathed in the light. While it illuminates their grime, their dirt, their sins… the light offers to cleanse them as well.

There is a debate in the artistic community about which of the figures in Caravaggio’s piece is Levi (also known as the future St. Matthew). Given the fact that the Contarelli chapel has two other Caravaggio pieces with a bald, bearded St. Matthew (The Inspiration of St. Matthew and The Martyrdom of St. Matthew), it has been surmised that the bearded man in the center of the group is St. Matthew. With eyebrows raised and finger pointed (presumably at himself), he seems to ask, “Me?”

But I have always favored the other theory: St. Matthew is the young man at the end of the table. Head bowed, shoulders hunched under the weight of his misdeeds and the troubles of his wayward life. Preoccupied, his fingers absently fumble with his ill-gotten coins. He is aware of the man at the door. And he is aware of the call. But his shame, his fear, his sense of utter unworthiness overwhelms him. Does salvation rest with this Rabbi at the door? Or is it found in the coins in my hands and the friends at my table? Can I shake my past, my irredeemable past and walk a different way? Perhaps, just perhaps with his help, I can be pulled from this blackness into a radiant light.

“Me?” he wonders and shudders.

And follows the Christ.

As Jesus passed on from there, he saw a man named Matthew* sitting at the customs post. He said to him, “Follow me.” And he got up and followed him.
—Matthew 9:9