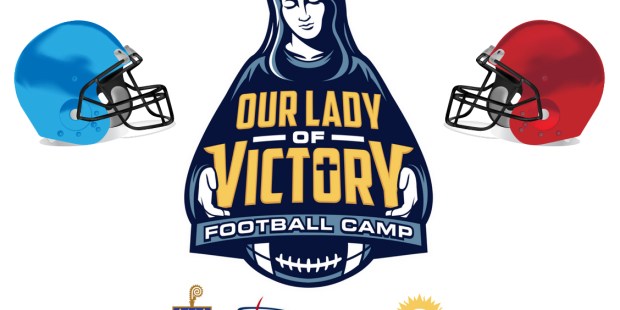 Starting this summer, St. Norbert Abbey, Catholic Athletes for Christ (CAC) and Catholic Kids Publishing will be hosting an innovative football camp that hopes to impact the lives of high school boys by teaching them how to play as well as how to pray. The camp, for teens entering grades 9-12, runs from June 22-25 and will be taking place on the campus of St. Norbert College in De Pere, Wisconsin.

Tom Wall, organizer of the new Our Lady of Victory Football Camp, explained to Aleteia how the idea arose after he and another coach realized the impact coaches have in a teenager’s life.

Coaches have a strong influence on their kids. That was the way it was for me with my coach. I don’t remember really much of what he taught us on the field… in fact, I don’t think I remember anything. I remember the lessons of discipline, hard work, adversity, sportsmanship. When kids are trying to figure out who they could or should listen to coaches always get through. They always get through.

This was also the experience of Dan Duddy, Chapter Program Coordinator for CAC, who discovered first-hand the influence of coaches when asked by parents to talk to their kids.

I’ve been a high school football coach for 38 years and the last 22 of those years I was a head football coach. I used to have fathers call me and say, “Would you please talk to my son about his chores at home or about his history grade or the way he talks to his mother?” And then when I got older I found myself going to [my kids’] coaches and saying the same thing, “Hey, could you talk to Michael about his school work?” And I started to understand that we have to hold ourselves accountable to this responsibility as coaches. And if we’re going to call ourselves Catholic men then we better be practicing our faith and we better be inspiring them to do the same.

As head coach, Duddy decided to develop his own football camp that included the sacraments, mentoring and reflections on the Bible. Duddy explained to Aleteia the amazing power of the camp and how it influenced his team beyond any of his expectations.

The football camp that I led evangelized our kids and in turn it evangelized our football players’ families. Our players evangelized their own families through our camps. I had a father come to me and say, “Coach Duddy, Brian woke up the whole family on Sunday and told us we’re all going to Mass. Coach, my family has not been to Mass in 22 years. The last time we were in Mass was for Brian’s First Communion.”

Realizing the impact they could have on young people, Duddy and Wall then put their heads together, along with Father Jim Baraniak, a Norbertine priest and chaplain to the Green Bay Packers, to brainstorm a new type of sports camp that featured strong Catholic coaches who would be able to influence the lives of teenagers in a positive way.

The result, Our Lady of Victory Football Camp, will be led by quality instructors from colleges, universities and high schools who will be able to teach the boys not only how to throw a Hail Mary, but also how to pray one.

Each day will include Mass, where the boys will be able to see their coaches participate and witness to them the importance of prayer. The rest of the day will be a mix of intense football instruction on the field as well as talks and presentations by priests and speakers off the field who will focus on topics such as virtues and servant leadership.

The hope is that this program will impact these boys positively and help form them into strong Catholic leaders in their community.

At the same time, both Duddy and Wall want to emphasize that it is still a “football camp” and not a religious retreat. The boys who attend the camp will be put to the test physically and taught techniques from some of the best football coaches in the area.

After this summer Duddy and Wall plan to evaluate the success of the camp and will work with anyone interested in establishing a similar camp in their area. It could be a football camp, a girl’s basketball camp, or any high school sport. The goal is to use all sports as an avenue to reach kids and evangelize them.

For more information or to register for the Our Lady of Victory Football Camp, visit www.olovfootball.com.