A Catholic widower on difficult mercy of “turning off the machine” 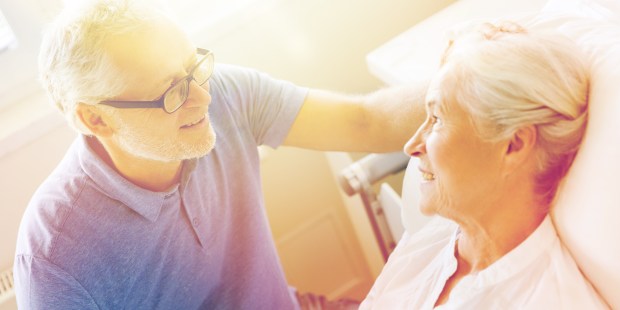 “Trusting in God is a beautiful thing. It can also be scary, because you must be prepared to accept His results.”

[In this piece, one of Aleteia’s frequent contributors recounts his personal experience with end-of-life decisions. We have just run a helpful piece on the Catholic Church’s understanding of “proportionate and disproportionate” care and how this distinction informs the Church’s opposition to euthanasia and physician assisted suicide. We offer this account to illustrate how those directives can be lived-out in real life. -Ed.]

Loretta had been ill for a long time. On April 6, 2002, during our oldest son’s wedding reception, she collapsed. She was taken to the hospital and by that evening was on life support.

During the ensuing days, attempts to wean her from the oxygen saw her lungs failing within 30 seconds. Twelve days later, after listening to the opinions of six different doctors, my children and I said our goodbyes and I gave the order to “turn off the machine.” That sickening moment is, for me, still beyond description.

The machines were turned off and 30 seconds turned into a minute and the minute turned into an hour and three days later she was upstairs in a room. The hospital chief of staff and the cardiologist kept telling me not to get my hopes up because she was more than likely not going to make it.

Three weeks later she was home. The nurses at the hospital gave her a new name, “The Miracle Woman of Northside.” Indeed, a miracle it was and anyone who was there had no doubt that the hand of God was involved in Loretta’s incredible, unexplainable recovery.

She lived another year and then melanoma took her on April 4, 2003. She died at home with her family at her side. God had given her back to us for another year.

In August of 2006 I remarried. We had both been widowed and we both were members of the St. Vincent de Paul Society. Her name is Martha, but everyone calls her Marty. She came down with lymphoma in 2010, was in chemo cycles off and on into 2013, and then was diagnosed with Alzheimer’s disease.

Read more: As Alzheimer’s slowly steals my wife from me

This past Thanksgiving Marty developed a severe staph infection around the hardware in her surgically repaired ankle. On November 28, she was admitted to the hospital. As Alzheimer’s disease progresses, the victims of this insidious illness become more and more insecure. Their home becomes their safe haven and their primary caregiver their “safe” person. The hospital was a strange place with strange faces and she was terrified. She had no understanding as to why she was there. The following Thursday she had surgery on the infected ankle.

The infection had spread deep into the bone; IV antibiotics would be required four times a day thru January 3, at the minimum. On December 3, she was transported by ambulance to a rehab facility a few miles away. By the time I tracked her down at 8:30 that evening she was more terrified than I can describe. When she saw me she began crying, “Oh my God, you found me, you found me.” She sobbed for 10 minutes.

They were administering antibiotics to her through her surgically implanted medi-port, which had been used for her chemotherapy. She kept disconnecting the IV lines and scratching and clawing at the site while awake and while asleep. She did not understand anything that was happening to her.

At 9:30, on the night of December 19, they called me to tell me she had gotten up and pulled the IV tree over and her needle had come out from her chest and she had fallen. She was not hurt but her nurse thought I needed to know. She was right — I did need to know and I knew something had to give. I immediately saw “restraints” on the horizon.

At 4 a.m. I drafted a letter stating why I wanted Marty’s IV treatments stopped and that I wanted her sent home on oral antibiotics. I was and am aware that oral antibiotics are not as effective as the IV variety. But Marty was living in a terrified state, the victim of a disease that never rests, having to submit to treatments that she thought were torture.

The following sentence was in the “discharge orders” for Marty: Mrs. Peterson being discharged home today per request of Mr. Peterson. He understands the risk of not continuing IV Nafcillin to include not completely resolving her infection and that could lead to her death.

Yes, trusting in God is a beautiful thing. It can also be scary, because you must be prepared to accept His results, no matter what. Even clear principles can be difficult to apply.

At present, Marty is sitting on the sofa looking at the TV. She is at peace in her own home. She has no strangers sticking needles into her and telling her what to do. Traumatized from the 23 days away from home she has asked me at least a half dozen times today if I am “going away.”

“No, I’m staying right here with you. You’re safe.” She smiles and I know I did the right thing.

This post from the Culture of Life Foundation on “Carrying Out End-of-Life Refusal Orders in a ‘Culture of Refusal’” might offer readers further clarity on these issues.