Blessed Alojzje Stepinac, a hero to stir the hearts of the most complacent Christians 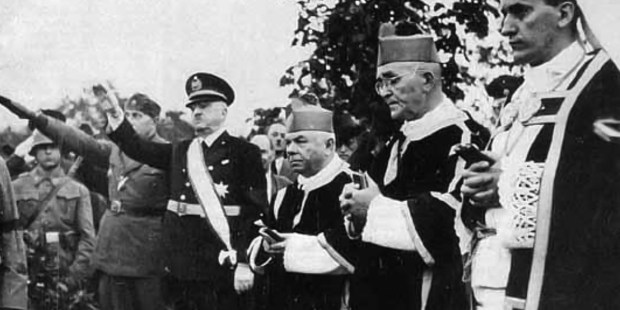 He resisted the Nazis and then the communists, and was declared a martyr by Pope John Paul II

The annals of Catholic history are filled with saints who took a stand against king and country in defense of truth. Countless martyrs have gone singing to their deaths rather than deny Christ, while many others took their lives in their hands when they refused to bow to a state demanding injustice. Though Catholics may be the king’s good servants, we are (like St. Thomas More) God’s servants first.

In a world bent more and more on hatred and injustice, we need witnesses of defiant love. Blessed Alojzije (Aloysius) Stepinac is a hero to stir the hearts of the most complacent Christians. Born in Croatia in 1898, Stepinac fought in World War I and spent six months as a prisoner of war before entering seminary and being ordained a priest at 32. Only three and a half years later, Stepinac was appointed coadjutor bishop of Zagreb, the youngest bishop in the entire Church. Three years later, he became the Archbishop of Zagreb and began the work of resistance that would make him a saint.

The middle of the 20th century was a very complicated time the world over, and Stepinac found himself working closely with the ruling power of Croatia. This fascist group was allied with the Nazis and was responsible for hundreds of thousands of deaths, largely motivated by ethnic cleansing. During this period, Stepinac’s commitment to resistance began. While he didn’t outright condemn the ruling powers, Stepinac issued several denunciations of racism, leaving no room at all for confusion. In 1942, he wrote:

“All men and all races are children of God; all without distinction. Those who are Gypsies, Black, European, or Aryan all have the same rights… for this reason, the Catholic Church had always condemned, and continues to condemn, all injustice and all violence committed in the name of theories of class, race, or nationality. It is not permissible to persecute Gypsies or Jews because they are thought to be an inferior race.”

Stepinac also contacted rulers directly, demanding that they cease killing Serbs and other marginalized groups. More than just speaking against racism (brave as that was given the political climate), he worked to assist Croatian Jews in making their way to safer countries, hid Jews and other minorities in monasteries, and instructed priests to baptize people of any religion who were seeking to convert even if only to save their lives. After the war, Winston Churchill spoke of him in glowing terms, saying, “[Stepinac] was one of the very rare men in Europe who raised his voice against the Nazis’ tyranny at a time when it was very difficult and dangerous for him to do so.” Despite Stepinac’s cordial public relationship with the Nazi powers, it seems the Gestapo were plotting to assassinate him while Croatian officials repeatedly wrote to Rome demanding that he be removed.

Throughout World War II, Archbishop Stepinac was able to work largely within the system, fighting the atrocities committed by the regime while maintaining diplomatic relations. When the war ended and the Communists took over, though, this was impossible. He began to decry the communist Yugoslav government and was arrested, allegedly for his cooperation with Nazis, though the public was well aware that his real crime was opposing communism and refusing to establish a Croatian Church independent of Rome.

By September of 1946, Archbishop Stepinac was immersed in a sham trial that would end in a 16-year prison sentence for his alleged war crimes. Released after 5 years, he was given a choice between exile and house arrest in his home parish. Stepinac refused to leave the country, saying he would stay with the Croatian people until he was dragged bodily across the border. Shortly after his release, he was named a Cardinal by Pope Pius XII, an action that ultimately resulted in Yugoslavia severing diplomatic ties with the Vatican. After almost 10 years under house arrest and nearly 30 years of fighting injustice, Cardinal Stepinac died at the age of 61. He was declared a martyr by Pope John Paul II in recognition that his death was hastened by his treatment at the hands of the communists he opposed.

The life of Blessed Alojzje Stepinac remains controversial, with some claiming he didn’t do enough to fight Nazism and others concerned that he was overly political. The canonization process isn’t a declaration of his infallibility, though; it’s a recognition that he was seeking to do God’s will above all. In Cardinal Stepinac, whose feast day is celebrated on February 10, we have a witness of a life lived in pursuit of justice and charity at great personal cost. We who live in a world that is not our home would do well to ask his intercession as we seek to balance faithful citizenship with a willingness to fight for the marginalized. Blessed Alojzije Stepinac, pray for us!