How a brush with death anchored this marriage 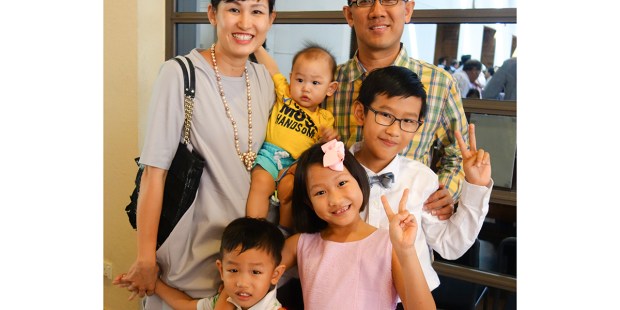 Ahead of World Marriage Day, which is celebrated on the second Sunday of every February, we have a story from Singapore. Julian and Eunice Tan, who have been married for 13 years, recount their harrowing experience and reflect on how it has made them treasure each other even more.

Our lives turned topsy-turvy on Friday the 13th in May 2011.

I’d barely slept the night before due to excruciating abdominal pains, and thought I had severe food poisoning. I was told later that Julian and Joshua, our firstborn, found me lying on the floor between our bed and the bathroom.

The doctors discovered that I was pregnant and suspected an ectopic pregnancy, as they could find nothing in my womb. I had to be operated on immediately as I was bleeding profusely internally.

It turned out I was suffering from a rare case of ovarian ectopic pregnancy, where the zygote was implanted in my right ovary instead of in the fallopian tube. The surgeon told us later he was “shocked to see the right ovary spraying blood.”

I was shocked when Eunice lost consciousness every time I tried to lift her upright. Her eyes rolled back, her face was as white as a sheet and her lips were almost black.

At the hospital, the doctor asked if I was prepared not to have any more children. Saving Eunice’s life was all that mattered to me.

During the operation, I prayed frantically for Jesus to guide the hands of the surgeons and keep Eunice safe and alive.

I thought about our marriage as well. I was grateful we had attended a Marriage Encounter Weekend. We had been spending quality time together after the weekend and communicating more deeply with each other.

I would have been devastated if she didn’t pull through just as we were rekindling the fire in our relationship. We were told she would most certainly have died if we had gone to the hospital any later.

When I woke up from the two-hour surgery, it felt like I had been resurrected from the dead. I knew I was being given a second chance.

The previous year had been a rough one for Julian and me. We were drifting apart as we were busy building our careers and caring for our two children, then aged 4 and 2.

We hardly slept in the same bed and had little time for ourselves.

The near-death experience was a wake-up call to seize the day and to live out our marriage vows with more conviction.

Our relationship had always been stable, albeit rather bland. We hardly argued, but neither did we share our innermost thoughts and feelings.

I took this close brush with death as God’s way of telling me to change my ways or risk losing all the people I love.

After what happened, I told myself I had to treasure Eunice more as she could be taken from me anytime. Through this incident, I truly experienced the love of God. He pulled us through the most difficult moments and, more importantly, gave our marriage a new lease on life.

We started to share our feelings more openly. The dialogue tool, which we picked up from Marriage Encounter, was especially helpful.

We used to sweep things under the carpet and avoid confrontation. Now, we set aside a time to discuss matters without being interrupted. For instance, we managed to sort out some disagreement concerning our extended family recently.

We now make time for each other, such as scheduling date nights. We even managed to go for a short getaway to mark our 10th wedding anniversary in November 2013. We also joined the Marriage Encounter ministry to serve as a couple. Our relationship has never been stronger.

The conviction to live my life more passionately and meaningfully helped in many ways to improve our marriage. I have learnt to put Julian first before the children and to take more care in my interactions with him. For example, I will give him more space to share his thoughts and feelings without interrupting. Sometimes, I pick him up from work when it rains.

Even when we assumed heavier responsibilities at work – Julian travels almost every week while I used to clock about 16 hours a day at work – we felt fulfilled and connected with each other. We sometimes conduct our regular dialogue via e-mail and Skype.

Even though Eunice’s chances of conceiving were slimmer after having an ovary removed, we were blessed with two more wonderful boys.

We now have a really lively home, with Joshua, 9, Emily, 7, Gabriel, 4, and Dominic who turned 1 last December.

It is a challenge squeezing out couple time while juggling a large family and a busy career. Often, we just want to hit the sack after a long day and we sometimes lapse into our old ways and forget to make the decision to love.

Thankfully, being rooted in the Marriage Encounter community of like-minded couples motivates us to always think of each other’s needs.

The road ahead is long, but we know we have God and each other to take the journey with.

It’s often said that abortion must be legal in order to protect the life of the mother in grave medical situations. Various medical conditions can cause pregnancy to jeopardize the mother’s life. However, a few things should be kept clear.

Catholic moral teaching takes into account the “principle of double effect.” It often happens in medicine that from one intervention, two effects can arise. One effect can be good, while the other is bad.

Interventions that might have a double effect can be morally acceptable under certain conditions.

In the case of an ectopic pregnancy, two lives are at risk, the mom and the baby. Doctors can act licitly to save the life of the mother by removing the child, even knowing that the child will die as a result.

This is not the same as aborting the child since abortion, as defined by John Paul II, is the “deliberate and intentional killing, by whatever means it is carried out, of a human being in the initial phase of his or her existence, extending from conception to birth.”

When a child’s death is accepted as a foreseen but unwanted secondary effect of a necessary medical intervention, there was not a deliberate or intentional killing of that child.

For more information on the principle of double effect, click here.

For considerations on the morality of the various methods for treating an ectopic pregnancy, read these helpful articles here and here.