How to protect your library, medieval style 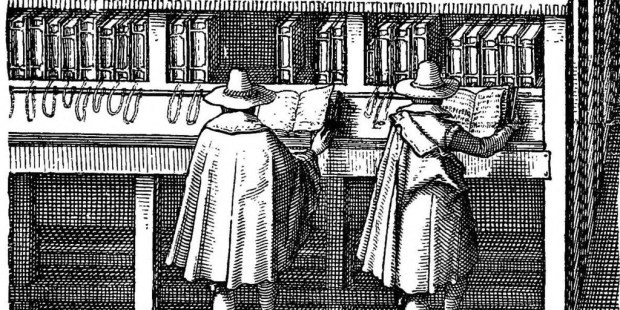 You don’t need to wield a sword if you go for this subtler and, at the same time, more radical method

Before the invention of the printing press, owning a book was a big deal. In fact, making a book — just a single one — could take years, and it was a craft only learned monks were fit to devote themselves to, patiently and meticulously copying text after text in the monastery scriptorium, day after day.

Moreover, once the work of the copyist was finished, most likely the book would then be chained to its assigned shelf, preventing any dishonest hand from seizing the final fruit of such hard, long work. But not only chains would protect these volumes: usually, at the very entrance of the library, either in the lintel or right on the door, messages that would surely make a potential thief desist from getting any of the books there stored were written. For instance,

“For him that stealeth, or borroweth and returneth not, this book from its owner, let it change into a serpent in his hand & rend him. Let him be struck with palsy & all his members blasted. Let him languish in pain crying aloud for mercy,  & let there be no surcease to his agony till he sing in dissolution. Let bookworms gnaw his entrails in token of the Worm that dieth not, & when at last he goeth to his final punishment, let the flames of Hell consume him for ever.”

Sometimes, such “curses” — usually shorter — were even written at the very beginning of the book:

May the sword of anathema slay
If anyone steals this book away.

These, and many other classic “curses” with which librarians and copyists would protect their cherished books have been collected by the historian Marc Drogin in his most recent book titled Anathema! Medieval Scribes and the History of Book Curses, which includes an abundant collection of these, let us call them “warnings.” One of the most famous of them all is the one we find in the library of the University of Salamanca, in Spain:

“Whosoever removes, alienates, or in any other way disposes of any book, scroll or paper from this library suffer excommunication, by disposition of His Holiness, without getting any absolution until the integrity of the library is restored.”

If you would like to take a deeper look at Drogin’s book, click here to read the great article Atlas Obscura published on the matter.