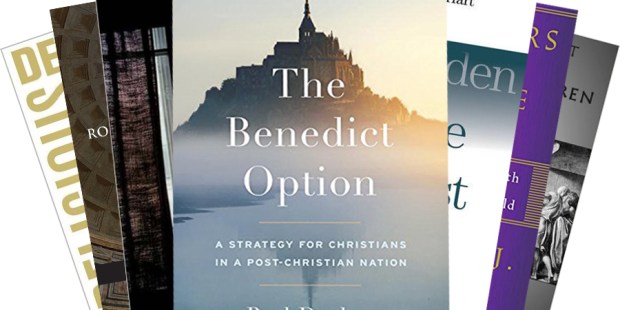 Whether dealing with timeless questions of metaphysics and phenomenology, or the social reality of living a Christian life in an increasingly post-Christian culture, these are 7 upcoming titles that Aleteia’s readers might want to get on their radar.

1. Strangers in a Strange Land: Living the Catholic Faith in a Post-Christian World

“A vivid critique of American life today and a guide to how Christians – and particularly Catholics – can live their faith vigorously, and even with hope, in a post-Christian public square.”

“How is this history of philosophy different from all others?

3. The Benedict Option: A Strategy for Christians in a Post-Christian Nation

“In a radical new vision for the future of Christianity, New York Times bestselling author and conservative columnist Rod Dreher calls on American Christians to prepare for the coming Dark Age by embracing an ancient Christian way of life.”

4. The Hidden and the Manifest: Essays in Theology and Metaphysics

“Rowan Williams says that David Bentley Hart ‘can always be relied on to offer a perspective on the Christian faith that is both profound and unexpected.’ A new collection of this brilliant scholar’s work, The Hidden and the Manifest contains 19 essays by Hart on theology and metaphysics.

“Spanning Hart’s career both chronologically and topically, these essays cover such subjects as the Orthodox understanding of Eucharistic sacrifice; the metaphysics of Paradise Lost; Christianity, modernity, and freedom; death, final judgment, and the meaning of life; and many more.”

5. The Power of Silence: Against the Dictatorship of Noise

“In a time when there is more and more noise, and technology and materialism continue to exert their hold on us, Cardinal Robert Sarah presents a bold book about the strength of silence. The world generates so much noise that seeking moments of silence only becomes more necessary. For Cardinal Sarah, modern man, in repressing the divine, finds himself in a deep dilemma, an oppressive and anguishing trial. The Cardinal recalls that life is a silent relationship between what is most intimate in man and God. Silence is indispensable for hearing the music of God: prayer arises from silence and returns to silence with ever greater depth…

“In this book, Cardinal Sarah has only one aim, which is summed up in this thought from his book: ‘Silence is difficult but it makes a human being able to allow himself to be led by God. Silence is born of silence. Through God the silent one we can gain access to silence. And a human being is unceasingly surprised by the light that bursts forth then. Silence is more important than any other human work. For it expresses God. The true revolution comes from silence; it leads us toward God and others so as to place ourselves humbly and generously at their service.’”

This point-counterpoint book brings together leading voices in the culture wars to debate such questions: John Corvino, a longtime LGBT-rights advocate, opposite Ryan T. Anderson and Sherif Girgis, prominent young defenders of the traditional view of marriage.

7. The Rigor of Things: Conversations with Dan Arbib

“In a series of conversations, Jean-Luc Marion reconstructs the path of a career’s work in the history of philosophy, theology, and phenomenology. The conversation ranges from Marion’s engagement with Descartes, to phenomenology and theology, to Marion’s intellectual and biographical backgrounds, concluding with illuminating insights on the state of the Catholic Church today and on Judeo-Christian dialogue.

“In these interviews, Marion’s language is more conversational than in his formal writing, but it remains serious and substantive. The book serves as an excellent and comprehensive introduction to Marion’s thought and work.”