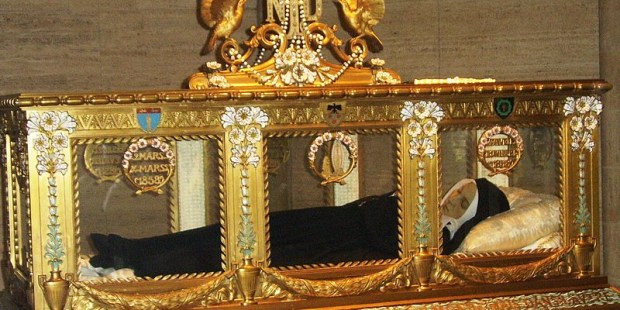 Bernadette Soubirous was an impoverished, malnourished, asthmatic, uneducated, possibly learning disabled 14-year-old when she accompanied her sister and a friend on a firewood-gathering mission to the grotto of Massabielle. While there, Bernadette had a vision of a “beautiful lady.” Neither her sister nor their friend saw what she saw, and she asked them to say nothing to anyone.

Naturally, they blabbed away about it as soon as they got home. Bernadette’s mother, thinking her daughter was looking for attention, smacked her and told her to stop talking nonsense. Nevertheless, she persisted.

The following Sunday, Bernadette returned to the grotto, and the lady greeted her, and asked her to return for a fortnight. People said she was neurotic, fantasizing or hallucinating. Nevertheless, she persisted.

Over the course of the fortnight, during which Bernadette fell into ecstasy before the vision, doctors would prick her skin, put candles to her and otherwise try to shock her out of her “trance.” She became a public curiosity and the source of gossip, speculation, and a wholly unwanted celebrity among believers and unbelievers alike — a very distasteful situation for a shy young woman. Nevertheless, she persisted.

She was told she was too stupid for heaven to use in any meaningful way, even though God has a habit of using the most confounding and least “obvious” persons to work his will in the world. Told by the local priest to get the name of the lady for him, she didn’t even understand the words, or the concept, or the dogma that she brought back to him when she pounded on his rectory door and then, when admitted, imitated the gesture of the lady as she said, “I am the Immaculate Conception.” Nevertheless, she persisted.

The lady asked her to dig with her hands, in the dirt of the grotto, and to eat the grass amid it, behavior that disgusted many and caused them to mock Bernadette. Nevertheless, she persisted.

The next morning, a spring appeared where she had dug, and there was an immediate healing of illness. Suddenly the little visionary was a pet of society, offered money (she refused), asked for blessings (she demurred). Repeatedly, she was called upon to relate the details of her visions to civil authorities and Church authorities, who doubted her story. Forthright, she said to them, “My job is to inform, not to convince.” Nevertheless, she persisted.

She walked away from all of that, and into a convent where she endured great hardship from superiors intent on insuring that this already-humble young woman wouldn’t become full of herself. Nevertheless, she persisted.

She died after suffering terrible agony, at the age of 35. When Bernadette’s cause for sainthood was opened, and the exhumation was performed, her body was found to be completely incorrupt — soft and pliable, her skin rosy in tone. You might say, “Nevertheless, even in death, she persisted.”

Read more: Power in the Church? Women have always had it