Ever heard of the Orthodox rosary called a “komboskini” or “prayer rope”? 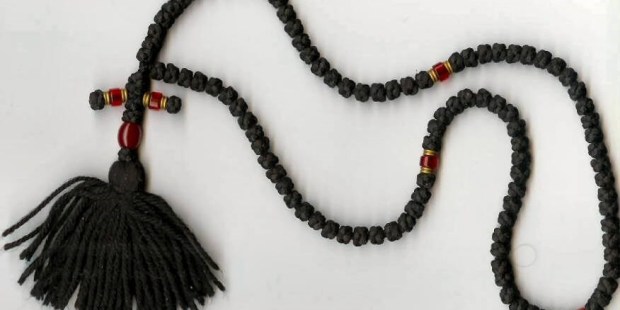 Tradition attributes to St. Pachomius the invention of the prayer rope (a loop, usually made either of virgin wool — symbol of the purity of the Lamb of God — or of silk threads, braided with knots) back in the 4th century, making this devotional accessory as old as monasticism itself.

When monks and anchorites began to inhabit the deserts of Egypt, looking for a life devoted to prayer, their custom was to recite the whole Psalter on a daily basis. That is, they would pray the whole 150 psalms. But since many of these monks were illiterate, they had two options: either they learned the whole Psalter by heart — which some did, of course — or they might substitute the psalms for some other prayers. Among them, the most famous brief prayer of all, “Lord Jesus Christ, Son of the living God, have mercy on me, for I am a sinner.”

According to tradition, St. Pachomius’ intention was to help the monks follow the advice of St. Paul in the first epistle to the Thessalonians: “Pray constantly.”

However, it is also said it was St. Anthony the Great, the father of Eastern monasticism, who started the custom of tying knots in the cord. Previously, monks counted their prayers by throwing small stones into a bowl, but the method proved to be quite impractical (especially if the monk was to pray outside his cell, carrying a bag of stones and a bowl in the other hand anywhere he went).

Tradition also states that every time Saint Anthony prayed a “kyrie” (“have mercy on me” …), he tied a knot in his rope, but the devil untied it, throwing off his count, making it impossible for him to meet his daily goal. The saint, then, had a vision in which the Virgin Mary taught him how to tie his knots so that they would resemble the sign of the cross, thus preventing the devil from untying them.

Generally, these prayer strings (called komboskini in Greek, chotki or vervitsa in Russian and misbaha in Arabic) typically have between 100 and 150 knots, although some with 33 knots can also be found (symbolizing the age of Christ at His death), as well as others with 41 knots (the number of lashes inflicted on Jesus) or 64 knots (according to tradition, the age of the Virgin Mary upon her Assumption into heaven).

Almost all the praying ropes are made exclusively by monks, and some include a tassel, which is customarily used to dry the tears of deeply heartfelt compunction for one’s own sins. This tassel at the end of the cord, some point out, also symbolizes Heaven, which is to be found only through the cross which, in the cord, precedes the tassel.