Annie’s gift: little girl didn’t have much time on earth, but she’s helped others live 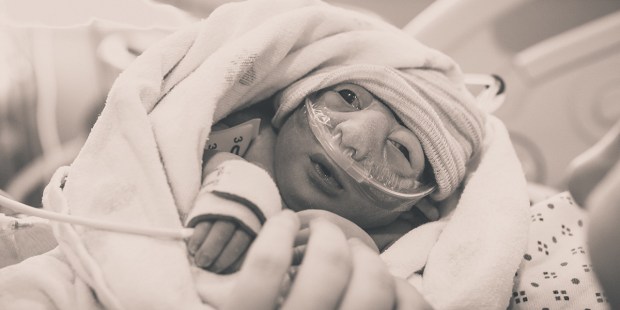 When the ultrasound technician stopped making small talk and went to call a physician in to take a closer look, it was the first sign that this pregnancy was going to be different.

The doctor came into the room, performed a second scan and wasted no time in telling Abbey and Robert Ahern just how different it was going to be.

“What I have to tell you isn’t easy, so it’s best if I just come out and say it,” he began.

He told told the couple that their daughter had anencephaly.

“He explained that during early development the neural tube didn’t completely close, so our baby was missing a major portion of the scalp and brain,” Abbey explained. “He continued to tell us that this condition was ‘incompatible with life.’ If our baby was able to make it to delivery, it would die soon after.”

But the Aherns would go on to make the phrase “incompatible with life” meaningless. “I wanted every second I had with this baby, in or out of the womb, to count,” Abbey wrote on her blog. The couple decided to call their daughter Annie Rachel and do everything in their power to give their her the chance to be born.

“We were initially told by the Prenatal Diagnostics doctor and my OB-GYN that we could discuss our ‘options’ once we were able to digest the news,” Abbey wrote. “Although they never came out and said it I know they were offering us the opportunity to terminate. This was absolutely not an option for us.”

No one in the medical community tried to change the couple’s mind, Abbey wrote in an article in Good Housekeeping. “But whenever I told certain family members and friends, they asked, ‘Are you sure this is what you want to do?’ I could tell by the looks on their faces they thought it might have been irresponsible or wondered why we didn’t just get it over with and terminate the pregnancy. Even my own sisters both told me later that they thought we were crazy for wanting to carry to term.”

Annie was born by C-section on June 26, 2013 and lived less than 15 hours, giving the Aherns and their two other daughters and other relatives and friends a chance to hold her, cuddle her, take pictures with her.

Abbey writes movingly on her blog about Annie’s final moments at the end of a long day that had begun in the hospital chapel:

It was around 11:00 p.m. Robert was sitting back in bed holding Annie, and I was sitting up taking sips of soup. All of a sudden I heard Annie gasp. I turned and looked at her and she gasped again. I grabbed her out of Robert’s arms, I looked into her eyes and I knew. We pressed the call button, and the nurse came in. I remember saying, “I think it’s happening.” She asked if we wanted her to go get our family and we told her yes. Robert and I prayed again over our daughter, but this time it was far less desperate. Annie had fought to be with us all day, and she was tired. God had let us spend far more time with her than I ever dreamed we would get, and we were grateful. It had been the perfect day, and this time I was really okay if she went home. Our family came quietly into the room and stood around us. … I thanked Annie for changing me. … I told her I loved her as many times as I could. And then I saw her leave.

Annie left us at 11:34 p.m. the same day that she came to us. We got to spend the most amazing and love-filled 14 hours and 58 minutes with our daughter and our family, and none of us will ever be the same. After the doctor pronounced her death, our family all prayed over her and asked God to welcome her home. Then they all hugged us and left us alone with Annie. We had over an hour with her while they were setting up down in the OR for her organ procurement. During that time I unwrapped her from her blankets and admired every inch of her. I laid back and put her on my chest and stroked the soft skin on her back. I held her and Robert held me. There was so much peace in that time that can only be explained by a divine presence. God was there. He had answered every single prayer. He gave us strength, stamina, joy, time, His presence, and He healed my baby and took her home.

Although the Aherns had arranged with the hospital for organ donation, donation from an anencephalic infant is complicated by medical, legal and ethical considerations. A person’s vital organs, such as heart, lungs and liver, may not be removed until a person has been declared dead. The usual criterion is “brain death,” but anencephalic babies still have a functioning brain stem, which maintains spontaneous respiration and heart rate.

Tissue donation, however, is possible. Doctors were able to use Annie’s heart valves for recipients and other organs for research purposes.

But organ donation was not Abbey’s primary motivation.

“Our primary motivation for bringing her to term was because she was our daughter, and we wanted to meet her and hold her and spend as much time with her as God allowed,” Abbey said in an interview. “We carried her to term because we loved her and we wanted to give her any chance she had at life and give God a chance to do miracles through her, and even though she didn’t live, we saw so many miracles. Organ donation was just something we did because she died.”

There were ways beside organ and tissue donation by which Annie gave life. The day the Good Housekeeping article came out, a woman in Oklahoma City got a diagnosis of anencephaly. The doctor who delivered Annie called Abbey and suggested that the woman might get in touch with her with any questions she might have.

The couple were “still going through the process of making their decision of what to do,” Abbey said. “The woman said that the article actually made her decision harder. … They thought, ‘O my gosh, we’re not only going to have to carry this baby to term, we’re going to have to plan a funeral and watch her die.’ It brought so many things to mind, and they thought they had thought of everything.

But perhaps Annie’s greatest effect was on her parents and siblings, especially on the woman who bore her.

“She definitely brought me closer to the Lord because I had never had to completely let go and just completely trust in the Lord before,” Abbey said. “We have our money and we have our house and we have our families, and it’s sometimes hard to just let go and only trust in the Lord, but that’s where my husband and I were at that time, like we had nothing. … She just made me more vulnerable.”

In addition, the whole experience of loss gave her greater empathy for others. She was troubled that people avoided talking to her about her loss, probably because people feel uncomfortable and don’t know what to say.

“If I know something is going on with you, I’m going to ask about it, because that is just the most hurtful thing to not say anything,” she said. “Nothing can hurt me worse than watching my baby die, so don’t be afraid to say something.”

As Abbey worked through her grief over the next several months, she would begin to hear friends react to her increasingly sunny disposition. “It’s good to have the old Abbey back,” they would say.

But it wasn’t the old Abbey, it was a new one. As she explained:

The new me has connections to countless other women who have suffered loss and is no longer terrified of vulnerability. The new me has a far deeper relationship with God, because I walked through a time where I couldn’t function without faith….

Annie’s story is one of hope. I think it shows people that in the midst of tragedy, there can be beauty. Annie was not ours to keep—her story was meant to be shared, and I intend to do so until the day I die.

When a Prenatal Diagnosis is Grim

A prenatal diagnosis of a terminal condition is devastating for any parent, and such circumstances often end in a decision to hasten the baby’s death through abortion. But there are resources to assist parents who decide to carry their baby to term, even with the prospect that the child will not live very long after birth. Here are a few:

Be Not Afraid is a Catholic non-profit whose mission is to provide support to parents experiencing a terminal prenatal diagnosis and carrying to term. BNA offers a free service focusing on “meeting the needs of expectant parents as they seek to honor the life of their baby no matter how frail or how brief.”

Perinatal Hospice has a list of programs around the country that provide services to unborn babies who are terminal similar to hospice for adults in their final stage of life.

Isaiah’s Promise was founded in 1995 to provide families who decide to carry to term after receiving a severe or fatal prenatal diagnosis, support, information, friendship and hope.

Prenatal Partners for Life provides support information and encouragement for carrying to term with an adverse prenatal diagnosis and support for raising a child with special needs after birth.