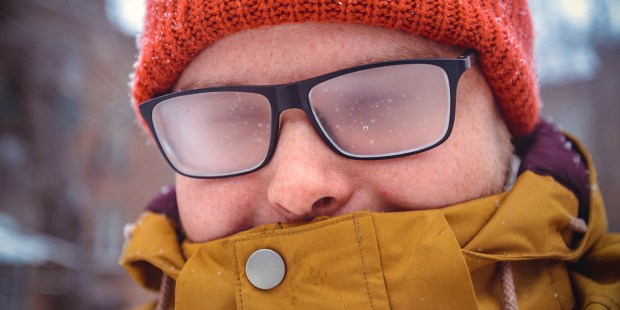 Just because others have it worse than you do doesn’t mean your suffering doesn’t matter.

February has really been doing a number on me. It’s all the usual things — cabin fever, head colds, icy roads, and a handful of other things, all making me a bit frustrated. But they’re all such minor things that I wasn’t taking their weight that seriously. I figured all I needed was a stern talking to, along the lines of: “Pull yourself together. After all, there are homeless people experiencing these conditions. There are people who are much sicker, lonelier, and more frustrated than you. You need to get some perspective!”

That perspective thing, though, it’s a trap. It makes a convincing argument, that if you force yourself to really remember how much other people suffer, you’ll focus on gratitude for your own blessings, and not pay so much attention to what’s been going wrong in your own life. Your own sufferings will shrink in comparison to the pain that others go through. “I cried because I had no shoes,” said Helen Keller, “until I met a man who had no feet.” I get what she’s saying, I really do, but you have to be careful with the idea that all it takes is a little perspective to make you replace your complaints with glowing gratitude.

Because it really, really doesn’t. Not in practice.

Keller’s quote is great to remind us that we do sometimes actually relish making mountains out of the molehills of our tiny problems. For some reason we delight in blowing things up until we feel we’re just a small step from the heroism of the martyrs. A proverb like Keller’s is a reminder that you aren’t the only one who has it bad, and that self-pity is a slippery slope with sharp rocks at the bottom.

But expecting that calling to mind other people’s suffering ought to be enough to make yours somehow disappear? That isn’t how it works.

What this thought pattern does do, in fact, is tell you that your own sufferings don’t count. That the suffering isn’t real. That in comparison to others, you don’t measure up. It instills the sneaky habit of comparing yourself to other people, so instead of acknowledging your pain, and taking it to Jesus, you end up saying, “This doesn’t count, because so-and-so has it worse,” and then feeling bad for being so unhappy about it.

That’s perspective all right, but it isn’t God’s perspective. God is a God of love, and also of truth. He doesn’t want us to inflate and exaggerate our suffering, because that doesn’t reflect reality, so it isn’t doing anyone any favors. But for the very same reason, he doesn’t want to dismiss that suffering, minor or not. He doesn’t want us saying, “This bad day wasn’t actually a bad day because nobody died.” If it was a bad day, then that matters. If God, the God of truth, sees our suffering as real, and even valuable, than so should we.

God encounters each of us so personally. He doesn’t ration his love toward us based on how far up we might be on the pain scale. He doesn’t say, “Well, you aren’t suffering as bad as he is, so I’m not going to take much notice.” He doesn’t even say, “This suffering is so temporary. I’m just about to step in and blow it all away. So it doesn’t really matter.” It always matters. God always cares. That’s what love does. When Jesus heard the news that his friend Lazarus had died, he wept, even though he knew perfectly well that in a few days, he was going to make Lazarus better than new, and everybody in grief would be able to rejoice again.

God’s perspective is about love, not comparison. And love is like fire — it starts small, and spreads everywhere it can. Surprisingly, when we learn to accept our own suffering, neither exaggerating it or dismissing it, we’ll become more compassionate towards our suffering brothers and sisters, too.

We all know that, tempting as it is, it doesn’t do any good to compare yourself to other people’s virtues. The mother whose house is so much cleaner than yours, the man who is so much more confident, the friend who is so much smarter — they have their virtues, and we have ours. We know we should try to keep that kind of comparison from making us think less of ourselves. Let’s learn not to compare our sufferings either, for the same reason. All suffering matters, and every suffering, no matter how small, can be joined with the value of Christ’s own suffering, to heal the world.