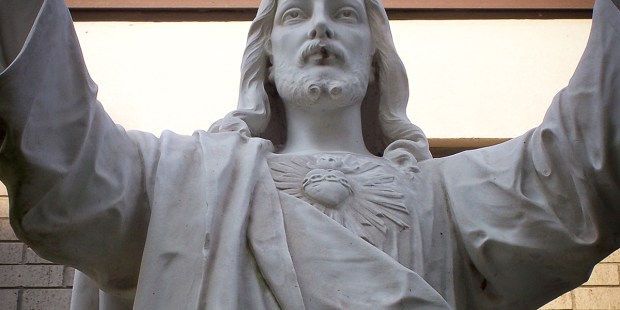 The inspiring story behind a sad event at a Brockton, Massachusetts, parish

When four statues outside St. Edith Stein parish in Brockton, Massachusetts, were vandalized last week, the person it saddened the most may have been an 18-year-old university freshman named Nicholas Belizaire.

Four years ago, the priest of the parish, Fr. Joe Raeke, took Belizaire to a garage and showed him a full-size marble statue of the Sacred Heart of Jesus. It was in bad shape – muddy, with the hands broken off, fingers missing — and the church didn’t have enough money to restore it. Raeke thought it would make a great Eagle Scout project for Belizaire — and he was right.

“The moment I saw it, I took to it instantly,” Belizaire told Aleteia. “I envisioned what it could be, and what it could mean to the church, which means a lot to me.”

Belizaire, who grew up in the parish and is still a weekly altar server while he studies biology/pre-med at the University of Massachusetts (Boston), began to raise the $3,000 in funds needed to restore the statue. He held bottle and can drives and sold chocolate bars to local parishioners. It took him a year and a half and then he had to do research to find artisans who could do the restoration. Finally he did. When the statue was brought back to the parish property, it was placed on a new pedestal and with new landscaping around it.

Belizaire’s family was very proud of his accomplishment and the Eagle Scout was happy to do something so meaningful for the parish. “I’ve been going since I was a baby; it set the foundation for my faith and I still serve there,” he says. “Going to Mass every Sunday continues to strengthen my faith.”

Fr. Raeke, who’s been at the parish for five years, is also very proud of his hard-working, faithful parishioner. “He’s a great young man, worked so hard, and pulled others in to help him do it.”

When Belizaire learned of the recent vandalism done to the Sacred Heart statue, but also to three others — Mary, St. Francis of Assisi, and Saint Teresa Benedicta of the Cross (Edith Stein) — he said he felt a “mix of everything.”

“It kind of hurt me to not only see my statue like that, but all of them, because that church means so much to me,” says Belizaire, “It ruined my mood that day, for sure, but when I found out that the archdiocese had insurance and would cover the cost of repairs, it made me feel better.”

Raeke says they believe the person who did it is mentally ill and needs help. The police have become involved. “My message is that we need to keep forgiving,” he says.

As for Belizaire, it sounds like he will continue to be someone who chooses to make a difference. The oldest of three plans to be an ophthalmologist. “Ever since I was a little kid, I wanted to be a doctor,” he says. “After looking into it I decided to become an ophthalmologist… the eyes look simple but they’re really complicated… I want to take what I learn about eyes and use that knowledge to help people.”