Saint Robert Southwell, the martyr who brought beauty to England 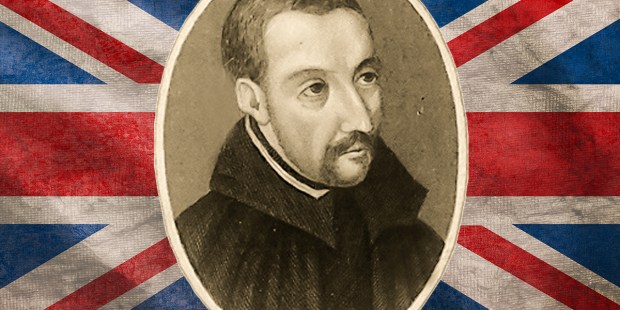 The poet priest knew that for Church to survive, she needed not only Sacraments but an intellectual life and a culture.

There’s a delightful sense of satisfaction that comes of shattering a useless stereotype. When faced with someone who’s certain that Christians are weak, milquetoast types, I delight in referencing St. Gabriel Possenti, who drove an army out of town using the guns he stole from their holsters. Aquinas and Albert and Augustine obliterate the modern claim that Christians must all be intellectual lightweights. Really, I don’t think there’s a single saint who fits nicely in any box the world would like to fashion. But St. Robert Southwell, a poet, a priest, and a martyr, defies expectations on every front.

Robert Southwell was born in 1561 in Protestant England. Though his family was Catholic, their fortune came from a monastery seized by Henry VIII, and Robert’s father and grandfather both wavered between Catholicism and Protestantism. Still, Robert was sent to Europe for a Catholic education when he was 15 and not long after petitioned the Jesuits to accept him. When he was denied, the gentle and artistic Southwell walked to Rome to ask more forcefully. His determination paid off and his request was approved.

Ordained at 23, Southwell asked his superiors to send him to England, a country already running red with the blood of priests. In the footsteps of St. Edmund Campion, he set off for England as his superior shook his head, murmuring, “Lambs sent to the slaughter.”

For the next three years, Southwell moved from house to house reconciling sinners and celebrating Mass. He was then installed at the home of St. Philip Howard, in prison for his faith and later to be martyred. Fr. Southwell became the chaplain to Howard’s wife, the countess of Arundel, while frequently leaving the relative safety of her house to bring Christ all over England.

Like every hidden priest in England, Southwell knew that his primary duty was to offer the Sacraments to the faithful. But he had a particular gift that the Church needed desperately. The purpose of the priests in England wasn’t just to minister to the souls who were still there but to maintain a Catholic Church in England. The hope was that one day the persecutions would subside and the Catholic Church could emerge as something authentically English, not something foreign introduced from without. In order for the Church to survive, she needed not only Sacraments but an intellectual life and a culture. These Southwell could give. Set up with a printing press, the man some believe was a cousin of William Shakespeare began to write and to publish both poetry and prose. His work flew to the farthest reaches of the kingdom, giving hope and joy to recusant Catholics (those who had refused to abandon their faith) who’d been approaching despair.

We moderns have forgotten the power of art, the power of literature. We settle for trite films and banal novels, not realizing that a people starved for beauty will truly starve. Southwell understood this, and in his poetic genius (a genius still recognized by secular scholars today) he sustained his people.

But he was a priest before he was a poet and Southwell spent the six years of his ministry in England celebrating Sacraments, traveling under cover of darkness, and hiding beneath floorboards as did the others. Finally he was betrayed and brought before the sadistic Richard Topcliffe to be broken.

His whole life, Southwell had been a remarkably handsome man, described as almost feminine in his beauty. Faced with a delicately beautiful poet, his captors were not expecting to find steel beneath his soft exterior. But Topcliffe, Elizabeth’s expert torturer, tormented him at least 13 times and each time was met only with the information that he was a Jesuit priest who had come to England to preach the Catholic faith and was willing to die for it. Southwell then spent two and a half years in solitary confinement in the Tower of London, after which he was finally given a trial of sorts and sentenced to be hanged, drawn, and quartered.

St. Robert Southwell was a sensitive man of strength, a Christian genius, a poet whose art strengthened the failing. But with all the gifts nature could offer, he longed for only one thing: Christ and him crucified. He yearned to be martyred, to pour out his blood for the glory of God, and his request was granted. In death he gained not only the crown of martyrdom but also an enduring legacy as the poet who reminded English Catholics of their heritage and strengthened them to endure. On his feast day, February 21, let’s ask his intercession for an authentic masculinity among Christians, one that values beauty, wisdom, and sensitivity as well as courage and strength. St. Robert Southwell, pray for us.